Jeff Bonaldi was a department head at Citibank when he struck out on his own to combine his passions -- history, adventure and stories. Here's what he learned.

The 25-year-old had just decided to cut his losses and move on from the business he’d been working on since age 21. After Bonaldi shuttered his first company, he set his sights on a safer path in the realm of business and banking, ending up as a top-level executive at Citibank. That is, until, he became riveted by a centuries-old legend.

It was October 2012, and Bonaldi, now 35, sat at a wooden table inside Small World Coffee, a local favorite in Princeton, N.J. His companions: green tea and The New York Times. One article in particular had drawn him in, penned by foreign correspondent Edward Wong. Even the title, “Myths and Mountains in Nepal,” snared him. The piece covered the tale of Guru Rinpoche, an Indian Buddhist master who is believed to have emerged victorious from a wide-ranging fight with a demon in Nepal.

A seed was planted in Bonaldi’s mind, which would later grow into a fully formed idea for his adventure travel company. About a year later, he’d travel to Nepal’s Mustang District and follow the path of the Guru Rinpoche legends himself. And in 2015, with the story as inspiration, he’d lead his company’s second-ever trip: a trek along the same path that legend says Guru Rinpoche traveled.

Today, Bonaldi’s idea has evolved into The Explorer’s Passage, an adventure travel company that plans each trip with captivating stories from history as through-lines. Guides lead travelers between different sites that shed light on the historical story they’re following, all in the context of an adventure trip. It’s been around for about four years, and in 2018, the company will guide more than 750 travelers on trips spanning all seven continents. But Bonaldi’s path to founder and CEO was a winding one.

When Bonaldi was 18, his father took his own life unexpectedly. The elder Jeff Bonaldi had been an inventor, and his chief idea was “Sports Klip” -- a thin, waterproof, clip-on pouch for runners, swimmers and other athletes who wanted to keep their keys and money safe. The patent approval came in the mail the day after he died.

At 21, his son thought the next logical step for him was finishing what his father had started. Then a college senior, Bonaldi reached out to a Chinese manufacturer, created a website and brochure, then launched the company at a New York trade show to rave reviews. Manufacturing and packaging were set in motion without a hitch, but the sales area tripped him up. A few years later, Bonaldi felt certain he’d never successfully break into the market in retail stores. Feeling like a failure, he decided to cut his losses and move on to something less risky. He told himself he’d never launch a company again.

Bonaldi chose business and banking as his safer path. He took relevant courses at the University of Pennsylvania, then used any connection he could swing to land an interview at Merrill Lynch. That led to a one-year stint in marketing, which led to a portfolio manager position, which led to Bonaldi overseeing $90 billion in client portfolio assets. He ended up as a top-level executive at Citibank, overseeing sales and marketing strategy across both North and South America.

When Bonaldi was 18, he discovered his love of history and storytelling through a visit to Princeton University. He’d never traveled outside the U.S. before, and he imagined that the campus resembled Europe. The stories of historical figures who had frequented the halls also fascinated him. Bonaldi attended a small public college nearby, but whenever friends or family visited, he would take them on informal tours of his favorite historical landmarks at Princeton, like a bench where Einstein had often sat or the Woodrow Wilson School of Public and International Affairs. 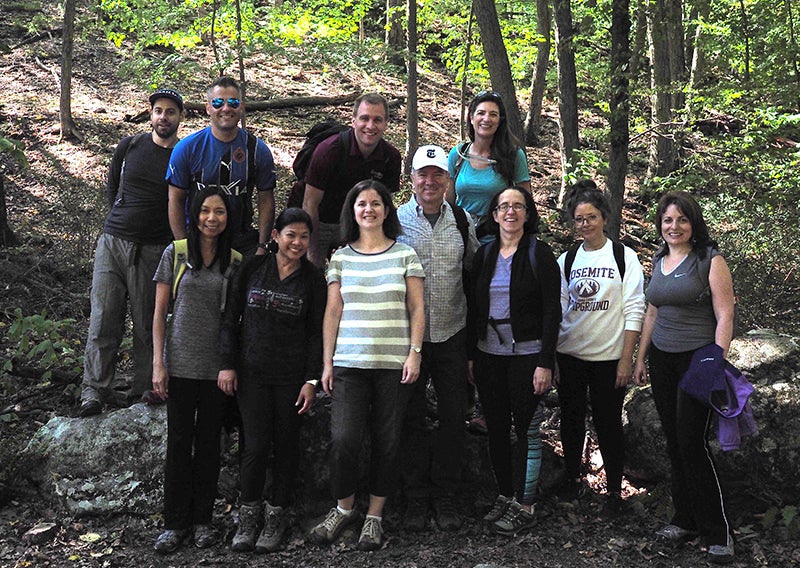 That love of storytelling had been asleep in Bonaldi, but in 2007, as an executive at Citibank, key changes in his life began to force him awake. There was the divorce. There was the financial crisis. And there were the many layoffs at his company, hitting staffers in their fifties the hardest. That stuck with Bonaldi. He didn’t want anyone else to control his fate.

During this upheaval, Bonaldi began feeling restless. He didn’t feel connected to what he was doing, and he wanted to rebuild his life into something he was passionate about -- he just wasn’t quite sure what that looked like. Things came to a head at a corporate conference he attended, where explorer Robert Swan was keynote speaker. Swan, who has been lauded by Queen Elizabeth II and the United Nations, is a leader in energy innovation and the first person in history to walk both the North and South poles. Hearing Swan speak onstage served as the final sign Bonaldi needed. “He was so passionate about his life and his goals, and I just said, ‘One day I want to live like him,’” Bonaldi says.

“I wanted to live through my heart,” Bonaldi says. After he saw Swan speak, he decided to start a company that combined the three things he was most passionate about -- adventure, history and stories -- and see if he could one day turn it into his primary source of income. For about seven years, Bonaldi essentially worked two full-time jobs -- by day, he was a manager, but by night (and weekend), he was a founder and CEO. With no travel industry experience, he leaned heavily on outside resources like the Adventure Travel Trade Association (ATTA). He started a corporation and a business bank account with his accountant’s help, enlisted a graphic designer to help with a logo and branding and finally landed on a company name. “The Explorer’s Passage” was inspired by the explorers of old and the Northwest Passage, a sea route which once seemed impossible to cross. 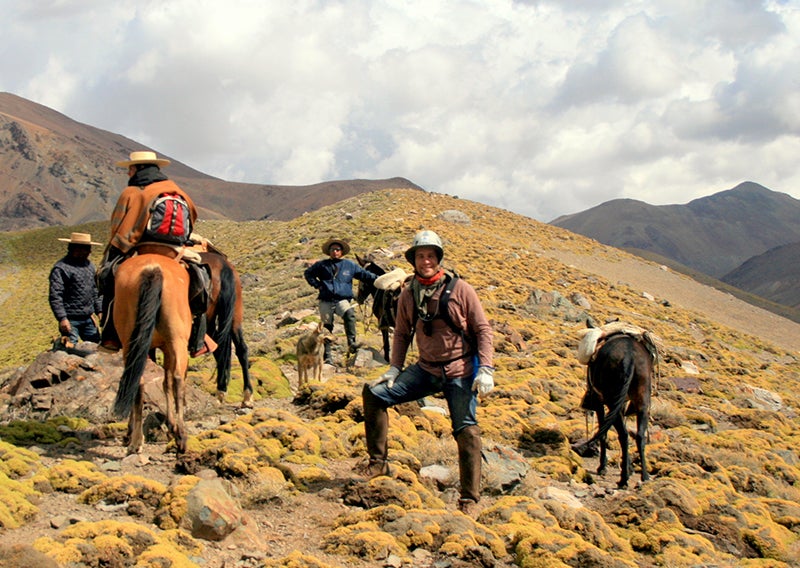 Dreaming up trip itineraries came most easily to Bonaldi. The first would be a crossing of the Chilean Andes, following the story of Argentine revolutionary José de San Martín -- the “George Washington of South America,” Bonaldi says. The second would follow the story of Guru Rinpoche through Nepal’s Mustang District. And the third would focus on the Klondike Gold Rush in the late 1800s, crossing from Alaska into British Columbia. To this day, Bonaldi says travelers can spot gold rush-era cups on the side of the trail. “We’re trying to find these places that have this deep history where you can see it in the land,” he says. “The places where people walked … the places where people did these incredible things.”

Bonaldi officially launched The Explorer’s Passage in February 2014 at The New York Times Travel Show -- and at the same venue where he’d debuted his father’s product 14 years before. The company won the title of best booth in show over close to 400 others. But the following year and a half were so difficult that Bonaldi almost threw in the towel. Despite a positive reception at the travel show, the company led no trips in 2014. Sales issues similar to the ones he’d had with Sports Klip plagued Bonaldi, and he realized that his experience with corporate sales wouldn’t help him as much as he’d thought. The trip itineraries he’d designed weren’t taking off. The reminder of what he had gone through with his father’s product was painful, and anger and self-doubt that he’d since buried came rising up to the surface. “Here we go again -- I’m going to fail again,” he says he thought. But there was a difference this time around: Now, he was doing it for himself -- and it was something he loved.

Bonaldi told himself to stop blaming others or the market for what was going wrong. Instead, he asked himself, “How do I need to change the product? How do I need to change myself to make this work?” When he turned his honesty on himself, things began to move forward. Bonaldi worked on his negotiation skills and did some soul-searching about why he might be fearful of success and power. He introduced trip itineraries in more popular destinations and launched a New York walking tour and day trip to get the word out about his company. It worked.

In 2016, Bonaldi reconnected with Robert Swan -- the keynote speaker who had inspired him to launch his company. Swan was looking for someone to serve as partner in running a trip to Antarctica through his foundation, 2041, which raises awareness about environmental issues across the board. Bonaldi jumped at the chance, and together, they led about 90 people from 18 different countries to Antarctica in March 2018, with the aim to educate them about sustainability and leadership so they could become environmental leaders in their hometowns.

In February 2018, Bonaldi stood up from his desk, walked across the trading floor to his boss’s office, closed the door and told him he was resigning. Bonaldi told him: “I’m not going to a competitor. … My business -- it’s thriving.” His boss smiled. Bonaldi was on to a new adventure -- a full-time one after shedding his safety net. 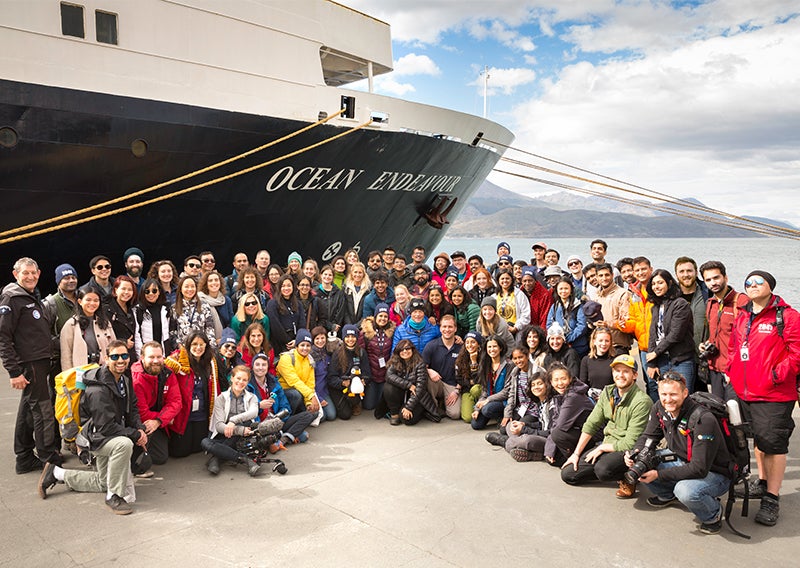 The Explorer’s Passage currently offers trips on six continents, including trips through Machu Picchu, Iceland, Chile and Nepal. And together with Robert Swan and his son Barney, Bonaldi is launching a strategic expedition series to areas around the globe that are most in danger from the effects of climate change. Next year, they’ll bring a group of travelers to the Arctic in June 2019, and another group will head to Mount Kilimanjaro in September 2019 and plant 1 million trees around its base to offset carbon dioxide effects. One more thing in the works: In coming months, Bonaldi plans to launch Gladiator Trek, a healing program for people experiencing depression or post-traumatic stress disorder (PTSD). It’s partly inspired by his father’s story.

On Feb. 28, 2018, Bonaldi posed for a photo at the southernmost tip of South America -- nicknamed the “End of the World” --  with Swan and about 90 other travelers in their group. They were about to board a ship called the Ocean Endeavor that would take them to Antarctica. In that moment, Bonaldi couldn’t believe he was standing next to explorers from 18 countries as the founder and CEO of his own company. “I had this idea years ago that I wanted to take people and show them history’s greatest stories with the greatest explorers on the planet,” Bonaldi says. “I’m standing there … and it was real. It was exactly how I had planned it in my head.”