Is the Growing Robot Revolution Killing Jobs in Japan?

By Komal Nathani November 7, 2018
Opinions expressed by Entrepreneur contributors are their own.
You're reading Entrepreneur Asia Pacific, an international franchise of Entrepreneur Media.

When the beautiful Erica, a humanoid robot talked to a man at the International Conference on Intelligent Robots held last month in Madrid, Spain, the audience marveled at her uncanny human appearance and communication skills. She and many others like her are the prime focus of researchers in Japan, who are trying to understand how humanoid robots can be integrated freely into the world, to work alongside humans.

The country which is considered a leader in tech and robotics is now witnessing a robot revolution — everything from sex dolls to humanoid and industrial robots. According to the 2017 report of International Federation of Robotics (IFR), “The world now includes approximately 1.1 million working robots and machines account for 80 percent of the work in manufacturing a car.” The report highlights that in 2016, robot sales in Japan increased by 10 percent to about 38,600 units, reaching the highest level since 2006 (37,400 units). Robot sales in Japan followed a decreasing trend between 2005 (reaching the peak at 44,000 units) and 2009 (sales dropping to only 12,767 units). Between 2011 and 2016, robot sales increased by 7 percent on average per year (CAGR).

Japan’s robotics industry has become all the rage in the world. But it has a pitfall, with robots replacing workers in multifarious sectors a great many jobs have been displaced. The disruptive Japanese robot industry is soon going to change the way human beings live, communicate, and work, the report states. The penetration of artificial intelligence (AI) and robots has hit every industry vertical, and has become an integral part of our daily lives. However, unlike other countries, the robotics leader is confident the revolution would not impact the job market in the country. According to ABB Ltd, which is one of the top robotics companies in Japan, the growth of robotics and the decrease in the rate of unemployment in the country is concurrent. As the automation industry is also creating a large pool of human jobs.

However, the same cannot be said for some of the major economies of the world like China, the UK, the US and others. Reports suggest that with the rise of automation a large chunk of jobs in various sectors would be eliminated in these countries in the next 20 years or so.

Japan reportedly uses around 300 robots per 10,000 workers. It has the lowest unemployment rates among the most advanced countries. Over the past few years, robots have been widely used in a diverse range of fields. Though robots have been around for decades, but robotics has extended to warehouses, farms, offices, and homes only recently.

As per the World Robotics Report 2018 by IFR, Japan’s manufacturers delivered 56 percent of the global supply of robots in 2017, which makes it the world’s number one industrial robot manufacturer. Additionally, the robot sales in Japan increased by 18 percent (45,566 units), representing the second highest value ever witnessed for the country.

A large number of companies from different regions are expanding their operations in Japan. One of the leading India-based robotics startup Grey Orange is working in partnership with Japanese e-commerce logistics provider GROUND Inc to provide AI-powered and robotics solution to transform the warehousing and logistics operations. In June this year, the company tied up with Daiwa House Group to develop a new generation of Intelligent Logistics Center to significantly improve the productivity of logistics facilities. The Asia Pacific CEO of the company, Nalin Advani says, “With 70 percent of the population shopping online, Japan is one of the fastest growing e-commerce markets in the world. Our company will deploy the Butler system to accelerate order fulfillment and consolidation, and ensure consumers get their orders quickly.” 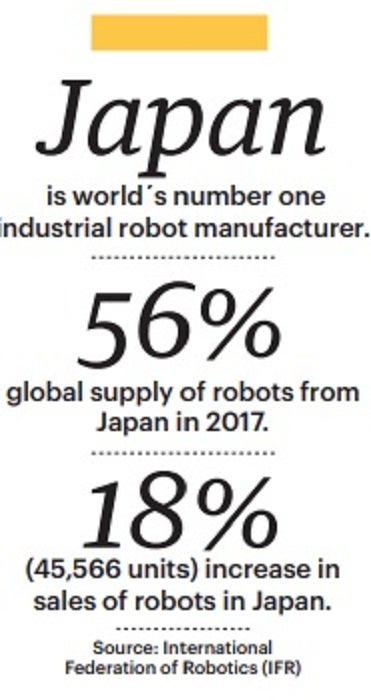 About how the robotics expertise is helping Daiwa Logitech in its operations, Junichi Akiba, the president and CEO says, “We have created this new model of shared logistics facilities using robots as our shippers require comprehensive logistics services. The Butler robotics system allows us to offer higher performance and realize higher productivity through shared logistics services. This delivers additional and exceptional value to each shipper to support their service level requirements.”

Other home companies like Yaskawa Electric, Fanuc, Mitsubishi and many other logistics and automotive firms are using robots very differently in their operations. A report published earlier this year showed a constant rise in the sales of industrial robots in Japan. According to Japan Robot Association, the country is expecting a 10 percent increase in orders over the course of this year. While the industrial robots are helping the country’s economy grow exponentially, the coexistence of human-like robots and human beings at workplaces and homes is still not sorted.

The Future of Robotics

Japan’s humanoid robots have taken over the world by emulating humans as closely as a machine can. A TV presenter, a receptionist, even your future employee could be a brown-eyed robot. Many more diverse roles in the next 10 years are expected to be taken over by robots.

About the near-future robots or creepy robots as they are called, professor Hiroshi Ishiguro at Osaka University, who is known as the godfather of humanoid robots, says in his TEDx Talk Human, Android and Media, “Interactive robots are the future robots. The impact of humanoid robots — the robots who can talk, walk and look like you — is immense. Interactive robots work in our daily lives the way industrial robots don’t. We are researching about the human behavior in robots as it could help in a lot of ways.” Tokyo-based robotics scientist also believes that the way Japan has accepted robots no other countries has. And Japan can set an example for others, and over the time it would resolve people’s dilemma over robots.

This Silicon Valley-Based Company Promises To Keep Your House Spotless