NBA legend Shaquille O'Neal has a big idea (naturally) about the events business.

The Super Bowl, depending on which economist you're listening to, can generate anywhere from $30 to $130 million in economic activity for the host city. Either end of that spectrum isn't too shabby.

But the money isn't just being spent on jerseys, beer and "We're No. 1!" foam fingers. There's a massive business in the events leading up to the Big Game, and if you've ever been to a Super Bowl weekend, you know that the competition for who hosted the best party can be just as fierce -- and leave more people knocked unconscious -- than the actual game.

Related: Does it Pay to Release Super Bowl Ads Before the Game?

This year, event planners should be shaking in their party boots: Shaquille O'Neal, aka DJ Diesel, just announced plans to bring his traveling carnival-themed music festival Shaq's Fun House to Atlanta on Friday, Feb.1 and true to the host, it is going to be very, very big. 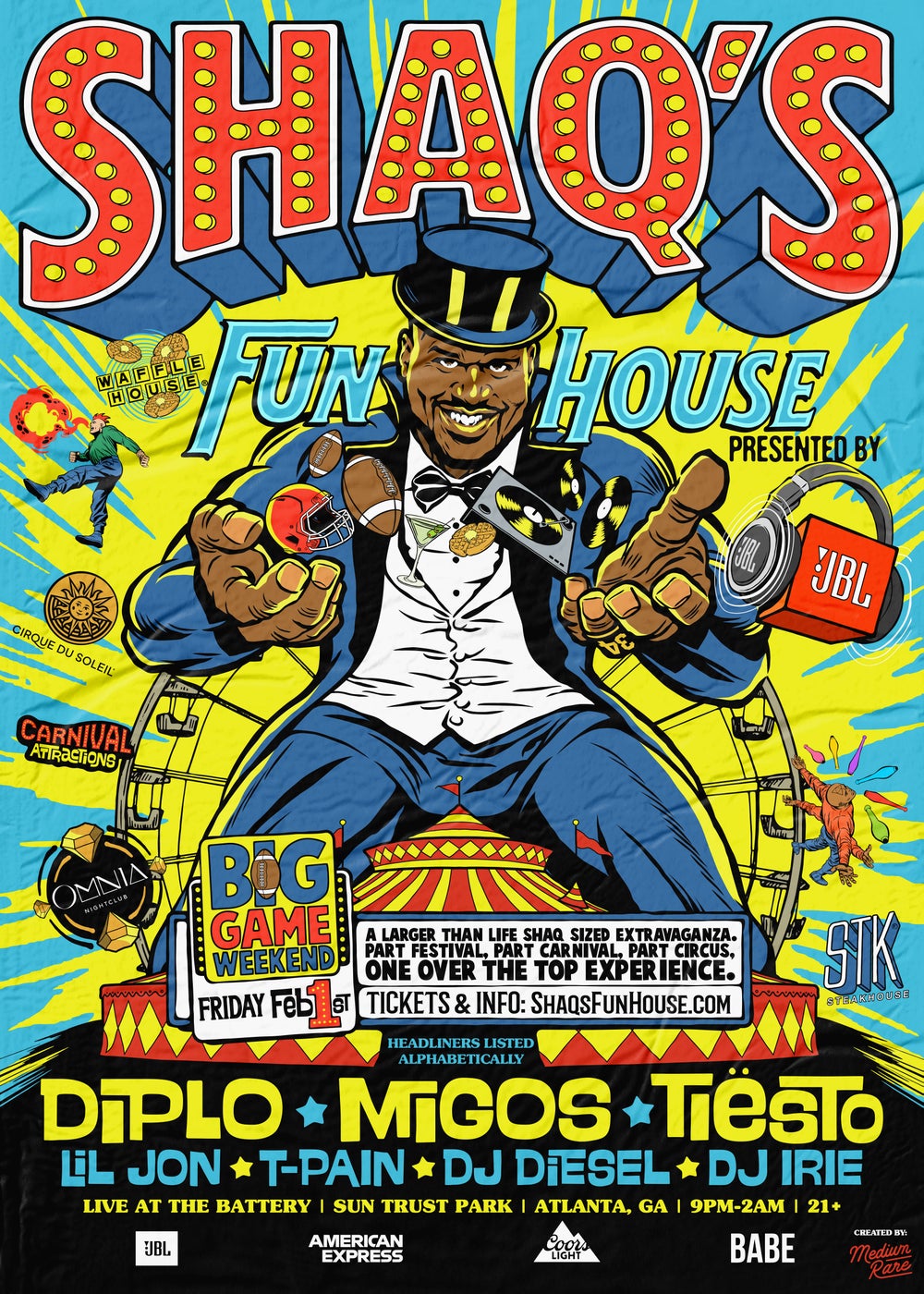 Entrepreneur spoke with the 7' 1" living legend and his business partners Joe Silberzweig and Adam Richman about what comprises a Shaq-sized party and what really matters in any business endeavor the big man takes on: "We never sit down and say, "We're going to raise this money for this, and monetize that.' We're just focusing on the fun aspect, on having a great time with my friends, and see where it takes us. That's what my brand is all about."

Give us the 60-second elevator pitch on this thing.

Shaquille O'Neal: There are two things that bring people together: sports and music. And I have dominated both. So this is part music festival, part carnival -- an event built around the Super Bowl that is all about fun. I've been to many Super Bowls and many events, and I wanted to do something different. So we're doing this in my backyard, Atlanta, where I live.

Our first event was in Miami and it was epic -- Diplo and Aoki were there, Gronk jumped on top of my neck, we had a great time. So for this, we wanted to go bigger. We rented out Live! at the Battery Atlanta at SunTrust Park where the Braves play. We've got Migos, Diplo, Lil John, T-Pain, a performance from Mystére by Cirque Du Soleil and, of course, the one and only DJ Diesel. There will be carnival games, food from STK and Waffle House. We gonna tear the house down, it's going to be a good time.

Will you save a spot on the merry-go-round for Charles Barkley?

How will this stand apart from other events happening during Super Bowl weekend?

Joe Silberzweig: What makes it so unique is that it is a live event platform for fans and a chance for everyone to interact with Shaquille in a way that other artists and athletes haven't done in the past. And it is all about his brand, which is the brand of fun. In envisioning this, Shaq, Adam and I sat down and mapped out what the "brand of fun" looks like, and that's how we came up with the carnival/music festival/circus vibe. We wanted to create the most fun atmosphere imaginable with Shaquille at the center of everything.

Shaq, when you go to the Super Bowl, do you ever look on the field and think, "I should have done that instead of basketball"?

I would love to be playing with Tom Brady, down by one, and Belichick calls a play and I say, "No, ignore that, throw it to me, Tom." And he throws it up and everyone is going, "What the hell is that?" And I just Odell Beckham Jr. snag it with one hand and just run out the stadium. That's my dream!

Related: Maria Sharapova Built a Business Empire Thanks to Her Winning Team

A lot of people know that you are a four-time NBA champion, but maybe not as many know that you also have a Ph.D. in Education. Any books that you recommend to entrepreneurs?

The One Minute Manager, The 48 Laws of Power and any book by John C. Maxwell. He is one of the top experts on leadership. And I realize that ever since high school, I had to be a leader. Some people say that leaders are born that way, but what they don't understand is that you can emerge as a leader as well.