Diversifying Your Workforce: Five Steps To Reduce Gender Bias In Your Company

When it comes to gender diversity, we know there is still a long way to go.

By Dalia Nejem March 18, 2019
Opinions expressed by Entrepreneur contributors are their own.
You're reading Entrepreneur Middle East, an international franchise of Entrepreneur Media.

At Endeavor, we believe in a world where anyone, from anywhere, can hatch an idea; access the networks, talent, and capital to take it to scale; achieve success; and pay it forward to inspire and enable the next generation. Our mission has been to build that world, selecting and supporting high-impact entrepreneurs with the potential to transform their local economies and culture around entrepreneurship through job and wealth creation, and the reinvestment of their time and money.

Much has evolved since we first started out. Today we’re proud to support 1,800 high-impact entrepreneurs in 34 diverse markets around the world with an unparalleled peer and mentor network. Endeavor Entrepreneurs have created 1.5 million jobs, generate billions of dollars each year in revenues for their local economies, and receive major international investment, bringing more VC activity to growth markets. Entrepreneurial role models aren’t just in Silicon Valley anymore, but all around the world, inspiring and guiding the next generation of founders in their communities.

But when it comes to gender diversity, we know there is still a long way to go. Just 17% of startups are female-founded. Even more disproportionate, according to Pitchbook, about US$9 out of $10 of venture capital in the U.S. goes to male founders. And while Endeavor’s network benefits from immense diversity in geography and industry, just under 20% of our active Endeavor Entrepreneurs are women. 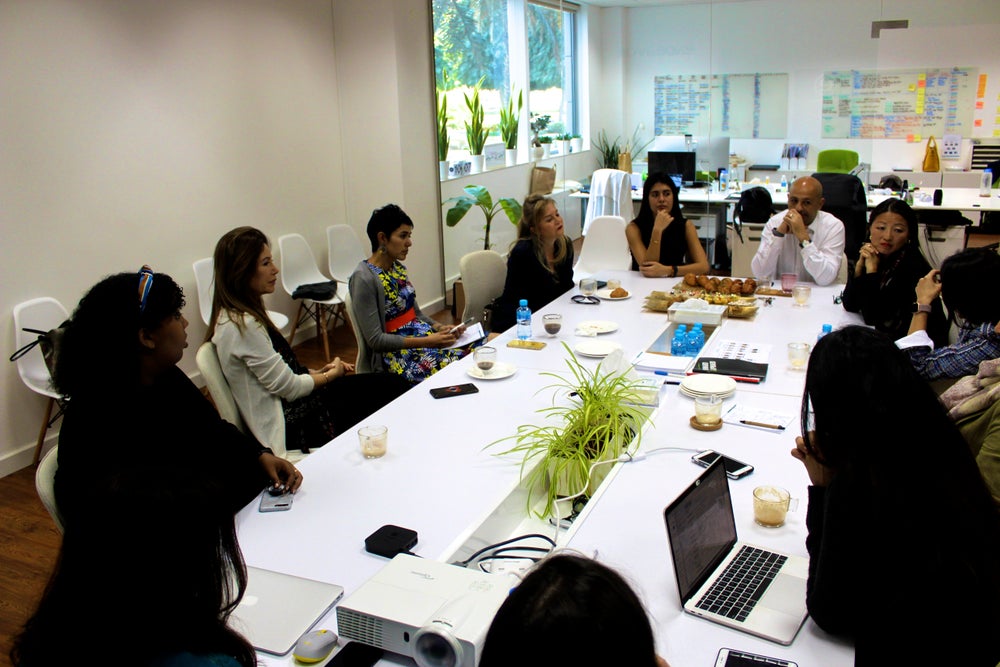 We celebrated the women in our UAE network on March 10th, at a breakfast hosted at our office in Dubai. A group of strong women leaders, including entrepreneurs leading high-impact scale-ups across multiple industries and senior corporate executives came together to discuss practical strategies that can be implemented in their businesses to work towards a more gender-balanced workplace. Rana Nawas, the host of When Women Win, the Middle East's #1 podcast where female role models from around the world share their inspirational stories and strategies they used to succeed, and President of Ellevate Dubai, moderated the discussion on gender parity, equal access to opportunity, and equal pay.

Despite progress, particularly in the UAE (according to the WEF Global Gender Gap Report 2016, the UAE ranks eighth in wage equality and first for literacy), there is still much to be done. Only 26% of women in MENAT are in the workforce, as compared to 58.6% in the US and 70.8% in the UK. One of the key takeaways from the session was that gender bias is not always explicit, and it’s not exclusive neither to gender nor age, but is rooted in social norms and cultural systems.

In her book, Brave, Not Perfect, author Reshma Saujani highlights the contrast in the upbringing of boys versus girls. Boys are encouraged to take risks, fail, and learn from their failures, whereas girls, on the other hand, are socialized to be perfect. This results in boys who grow up to be more resilient and brave, and girls who grow up to be women who are afraid to fail, assess themselves more harshly, and are more risk-averse than their male counterparts. 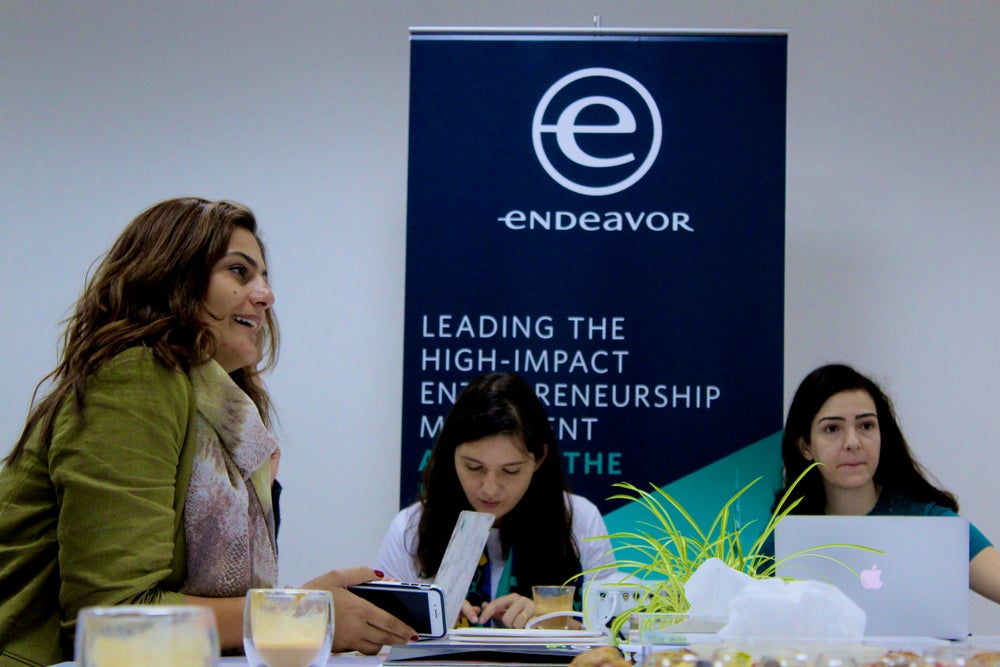 Source: Endeavor
Related: The Role Of Gender Equality In Ensuring Economic Growth
Gender bias is also evident when female founders who are fundraising are questioned about their commitment to the business, their plans for motherhood, and their ability to manage both- questions that male founders are seldom asked.

Because of these biases, companies miss out on having a diverse workforce, thus impacting their performance negatively. Increasing the number of women in senior management roles from 0% to 30% has been proven to increase the company’s profitability by 15%. Currently, the percentage of women in senior management positions in MENAT averages at only 5%. Can you imagine the impact on GDP if that number were to increase?

So, now what? At our panel discussion, Nawas highlighted the many steps companies can take to reduce bias within their organizations, and thus reap the benefits of a gender-balanced workforce. This can start from as early as drafting the job opening ad, to the way decisions are made in the board room.

1. JOB DESCRIPTIONS AND JOB ADS An internal report by HP found that “men apply for a job when they meet only 60% of the qualifications, but women apply only if they meet 100% of them.” This report is widely quoted and debated, and the reasoning could be attributed to women’s lack of confidence, or to their socialization to always “play by the rules.” Regardless of the reason, companies will attract a more balanced pool of applicants by rewording job descriptions and including a concise list of only the mandatory skills required for the job, as opposed to a laundry list of every skill needed.

2. THE DOUBLE-BIND OF SALARY NEGOTIATION Women are less likely to negotiate their salary; thus, their starting point is often anchored in a lower salary than men, which is a contributing factor to the gender pay-gap later in their career. However, when women do negotiate, they are perceived negatively as being demanding or too difficult, and in some cases, have offers rescinded as a result. This can be avoided if employers are transparent about the salary range they are offering from the onset. 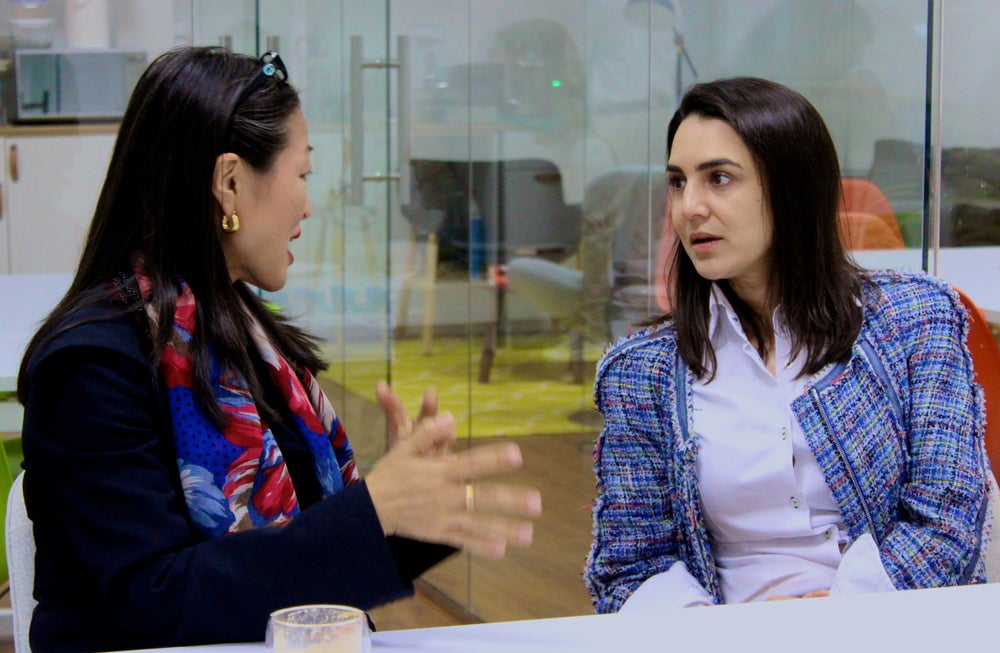 3. INTERVIEWS To avoid subtle and subconscious biases (and this applies not only to gender bias, but to race, ethnicity and age discrimination as well), the interview process should be standardized for all candidates, with the interview questions being exactly the same, and asked in the same order.

4. PERFORMANCE REVIEWS Women are known to assess themselves much more harshly than men. In a performance evaluation, this means that women consistently underrate themselves, hence anchoring the evaluating manager at a lower starting point, which leads to a lower performance review. Doing a self-appraisal privately and submitting it only after the performance review meeting is done ensures that biases are eliminated from the appraisal process whilst still garnering the benefits of a self-assessment.

5. PATERNITY LEAVE Enforcing paternity leave may be the most impactful drive that would bring us closer to true gender parity. A survey of 22,000 companies in 19 countries revealed that the policy with the biggest positive correlation to female leadership is actually paternity leave. Raising children should stop being perceived as the sole responsibility of the mother, and should be viewed as a family responsibility instead. Giving fathers the opportunity to be more involved in the day to day upbringing of their children, not only supports women to pursue their careers, but more importantly results in children who are stronger, more resilient and well-adjusted. The positive impact paternity leave has on the family and society as a whole far outweighs the financial burden on companies, however legislation should to be introduced to ensure introduction of fair paternity leave policies.

Dalia Nejem has over 15 years of experience in sales, marketing and operations management across a variety of industries. She is currently Director of Marketing for Endeavor UAE, part of a global, non-profit organization that promotes job creation and sustainable economic growth. Endeavor supports high-impact entrepreneurs by giving them access to markets, capital and a network of global experts.