The redesign makes the site look a lot more like the company's mobile app. But if you don't like it, you're out of luck.
Next Article Add to Queue


Twitter's major redesign to its desktop website is slated to soon replace the old interface for good.

The redesign, which began rolling out on Monday, makes the site look a lot more like the Twitter mobile app. You'll notice large swaths of white space, bigger fonts, and no more profile bio indicting your follower count on the homepage. Expect the site to also be "faster, easier to navigate, and more personalized," according to Twitter.

If you don't like the redesign, you're out of luck. As Mashable noted, Twitter plans to retire the old user interface for the new look. "Since it's a gradual rollout, people will be phased out as they're phased into the redesign -- there won't be one big disappearance of the old UI until everyone has been added into the new UI," a Twitter spokesperson told PCMag.

Some users are already complaining about the redesign. However, Twitter said it's been refining the new interface based on "hundreds of thousands of responses" received during the beta tests, which it announced last September.

Perhaps the biggest change is Twitter's decision to remove the notification bar and profile information -- including how many followers you have -- from the left corner of the page. In their place is a vertical sidebar that lets you access different Twitter features, including your notifications, messages, and bookmarks, but with no mention of your follower count.

The new sidebar also prominently features Twitter's "Explore" tab, which you can already find in the company's mobile app as a magnifying glass icon. Explore will give you a more detailed view of what's trending on Twitter, along with tweets the company's algorithms think you'll find interesting. 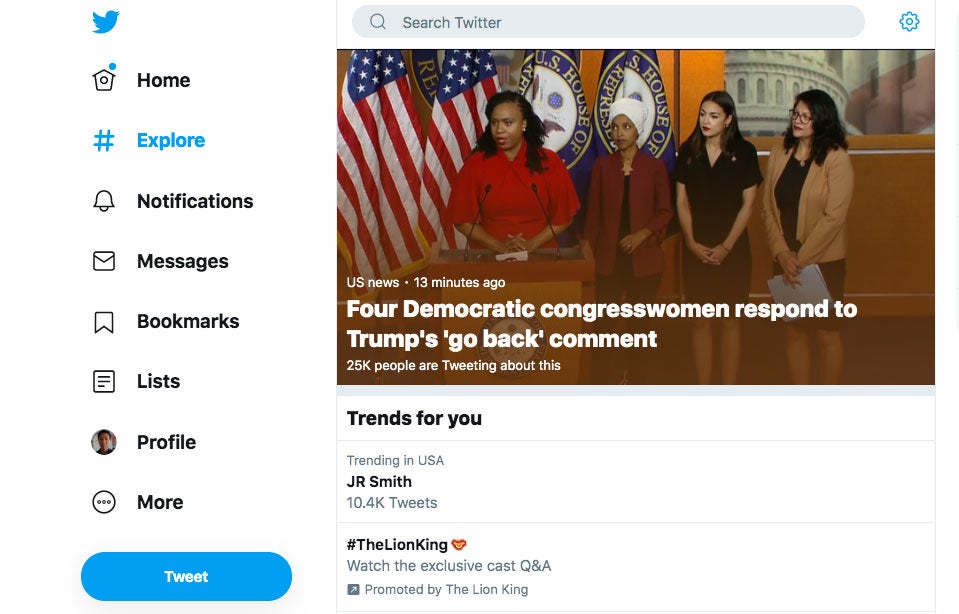 Another change is the direct messages section. It's been expanded "so you can see your conversations and send messages all from the same view," the company said. "Now there's less hassle switching between screens to send a message."

Under the hood, the company basically merged its desktop and mobile web properties into one codebase, which involved rewriting Twitter.com from scratch, it explained in a separate blog post.

"Many companies have one desktop site and a separate site for mobile web devices," Twitter's engineers wrote. "The downside of this approach is that it requires coding features multiple times, and prevents mobile users from accessing the full functionality of the product."

As a result, Twitter decided to consolidate the company's web properties into a single platform, which can automatically tailor the interface to your device. "The techniques and technologies we've used on the new Twitter.com mean you only download and run code when it's needed," the blog post added. "So a mobile user won't download the sidebar you see on the home page, and may not download the settings pages until they go to update their display name. However, it also means that the full functionality of the site is still available to them should they want to access it."

If you haven't been opted into the new design, you can try it by clicking on your profile pic, and going down to "Try the new Twitter." To go back to the old interface, it appears you'll have to log out and log back in.

Twitter Makes Working From Home a Permanent Option for Some Employees