Will Artificial Intelligence Lead Us to a Utopian Future? Elon Musk & Jack Ma Discuss Its Prospects

One thing was clear from the top minds that AI will disrupt the future solving things for humans, and both seem agreed that this is not some technology that will lead to a dystopian future

By Dipen Pradhan August 30, 2019
Opinions expressed by Entrepreneur contributors are their own.
You're reading Entrepreneur Asia Pacific, an international franchise of Entrepreneur Media.

The two luminaries of the technology, Alibaba’s Jack Ma and Tesla’s Elon Musk, shared the dias to discuss about the prospects of artificial intelligence (AI) — its impact on humanity, education, jobs, environment, civilisation and its extinction, etc. One thing was clear from the top minds that AI will disrupt the future solving things for humans, and both seem agreed that this is not some technology that will lead to a dystopian future. While there is an ongoing debate from around the world whether AI is actually beneficial for modern society, views presented by Ma and Musk on the technology, however, were unending — yet logical and smart. 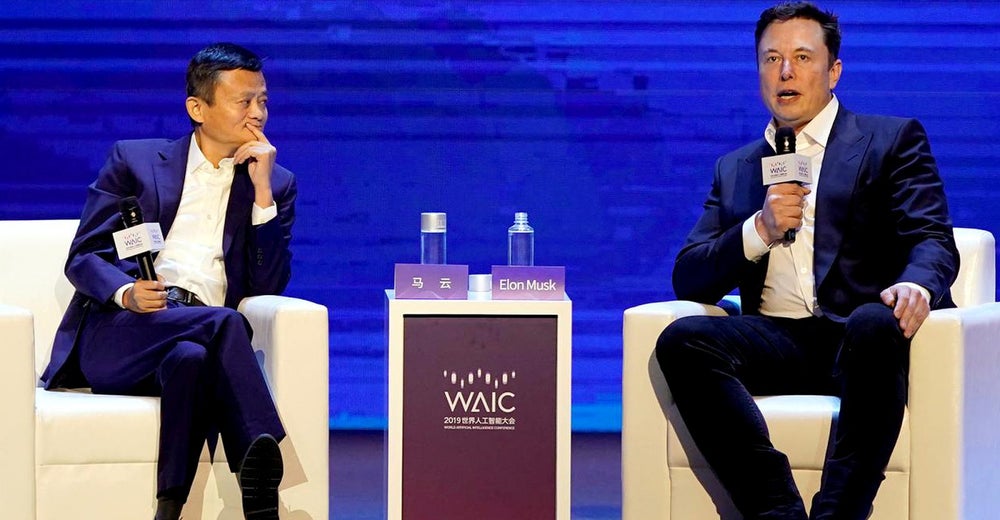 “I think AI is going to open a new chapter for the society; it will help humans understand ourselves better... I don’t think AI is a threat, or terrible. People worry a lot about this today are those people that I call them… uhhh ‘college smartiness’,” Ma said. He believes that computers aren’t smarter than humans, which Musk disagreed. “I think people generally underestimate the capability of AI. They sort of think AI like a smart human but it’s really much more than that... The biggest mistake that I see AI researchers making is assuming that they are intelligent. They are not compared to AI... So what do you do with a situation like that? There’s an old saying: ‘If you can't beat them, join them’,” Musk said.

Two of the leading luminaries on the technology, Jack Ma and Elon Musk, came together at the World Artificial Intelligence Conference in Shanghai that commenced from yesterday (August 29), and the debate was live streamed online by Bloomberg. Audience, too, had a chance to put on the table their questions on the topic.

To the discussion around what new jobs will be created because of AI, Ma is of the opinion that there will be a lot of jobs in the future. He added, “Second, we don’t need a lot of jobs...artificial intelligence or robots will do that job.” Musk also supported Ma’s opinion, saying, “I think, overtime AI will make jobs pointless. I’d recommend studying engineering because it’s into that kind of thing, or working on something where people can just interact with other people. Arts, of-course…”

Both are also concerned about the possibility that the world will face population collapse in the near future — 20 years to be precise according to Musk. Ma opined, citing China’s example, “1.4 billion people in China may sound a lot, but I think in the next 20 years we will see this thing will bring a big trouble to China, and the speed of the population decrease is going to collapse.”

In China, one-child policy was capped for most couples from the late 1970s. Although its government announced it was ending the policy in 2015, experts have time and again warned of its concomitant effects. “In China today, we have 1,800 new babies born every year, which is not enough. The best resources on the earth is not the oil, electricity, coals but it’s the human brain,” Ma said.

So, how much longer do you think people can live with the help of AI? the question was asked. Musk brought focus to his neurotechnology company, Neuralink Corporation. “If we do the neuralink essentially, age will not matter that much. You can simply save your state and restore your state, just like a saved game, or something very close to that.” He went on saying that environmental factors are relatively minor for extending lives. “You have to change the DNA. And the question is, will people be okay with changing the DNA... it’s probably a good thing that we essentially die.” Ma also agreed that it’s great to die. (Pun intended).

It is true that technology has become an integral part of our lives — from managing our daily activities on a calendar, the sensor that turns on the hot water, a device that tracks our steps and movements, the notifications that ping on our phones to shopping, commuting, ordering food, etc, etc…that we are so well interconnected with technology that we are already a cyborg. We would just be too slow assuming a benign scenario without technology, such as artificial intelligence.