"I have three dogs, I am an unapologetic gamer, and I'm originally from Brooklyn," says Golden Gate Ventures' partner, Justin Hall's online profile. Hall joined Singapore's Golden Gate Ventures as an intern in 2012, and has now grown to become an influential authority on early-stage investing in Southeast Asia – a region he's just as passionate about as X-COM, a famous sci-fi video game franchise, if not more.

"There's a lot to be excited about in Southeast Asia right now – valuations have increased across the board, and there's so much more capital in the market too. We're particularly excited about the tech sector, which is mostly where we invest," Hall says.

Even within the tech sector, Golden Gate usually invests in business to consumer companies, and stays away from business to business, or enterprise startups.

Sectors that excite him the most: Hall says logistics and social commerce sectors currently have his attention, as well tremendous growth opportunities in SEA. "Logistics is all thanks to e-commerce, if I could pick one thing to peg the boom on," says Hall, adding he expects logistics to see a lot more capital in 2020.

Space technology is another sector that's gaining traction in the region, the self-professed "gym-junkie" says.

Of all the countries in Southeast Asia, Vietnam is showing great growth prospects with some really good tech innovations coming from there, Hall says.

What he looks for in founders and their startups: "The ability to sell a product, an idea, or a business is what I look for in a founder first. The next is what market the company fits into, and how it competes with other players in that market," says Hall.

"Founders should also do their research before contacting VC firms they think might be interested in them, by finding out what verticals they operate in, what stage of funding they're at, and what sort of expertise they need from their investors," he says.

Hall's valuation methodology is mostly predicated on the sector the company operates in – for example, gross merchant for an e-commerce company, or payments volumes for a digital payments enabler. He then measures those metrics against the industry-wide numbers to see if they can be reconciled.

Hall says even though the company is at a much later investment stage that Golden Gate's usual target, he finds a lot of value in the company, and has been impressed with how it has grown.

Portfolio companies that excite him: "Everything, of course!" says Hall. But specifically, Coda Payments, an online payments platform, Carousell, a consumer-to-consumer marketplace platform, and MoneySmart, a Singapore-based personal finance portal, are some companies that he likes in his portfolio. 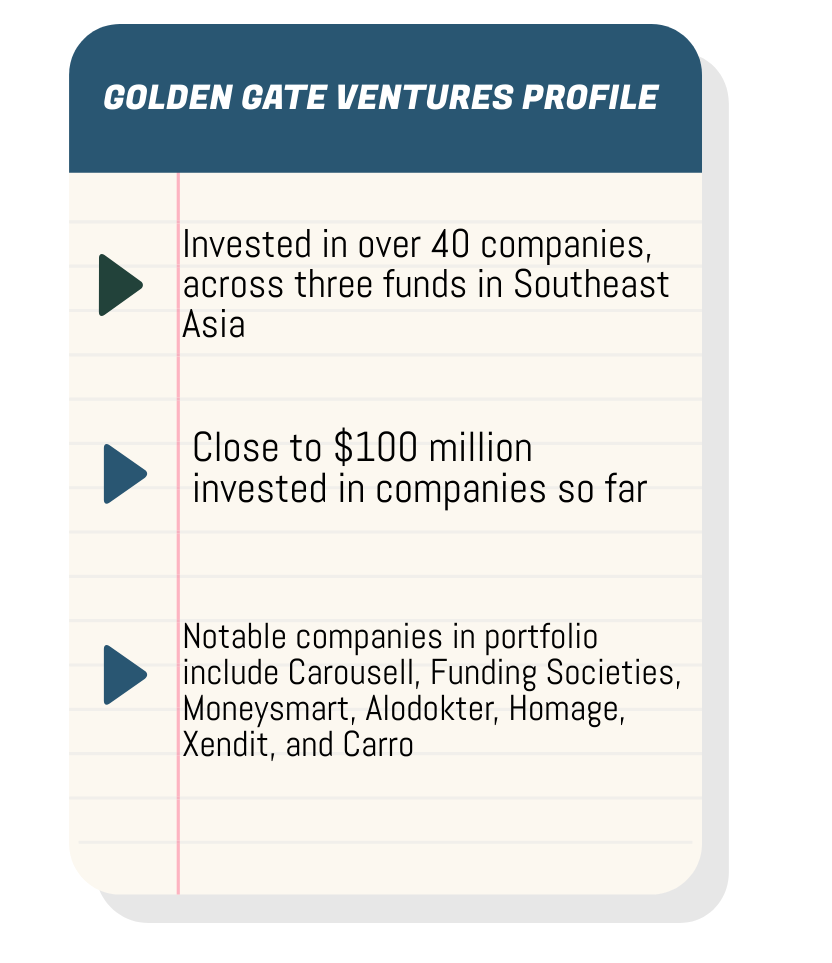 Workplace Learning Is Broken. These 5 Steps Tell You How to Fix It.

5 Forbidden Phrases You Absolutely Must Avoid in Your Facebook Ad