Stress Getting To You? A Session At The Smash Room Might Be Just What You Need

Whether you're fuming over passive aggressive co-workers, or unresolved arguments, or even just rude people in general, The Smash Room wants you to let it all out at their establishment by, as you guessed it, smashing things up in a room.

By Pamella de Leon Updated: January 28, 2020
Opinions expressed by Entrepreneur contributors are their own.
You're reading Entrepreneur Middle East, an international franchise of Entrepreneur Media.

Whether you’re fuming over passive aggressive co-workers, or unresolved arguments, or even just rude people in general, The Smash Room wants you to let it all out at their establishment by, as you guessed it, smashing things up in a room with a baseball bat, hammer, crowbar, or even a sledgehammer. Launched in 2018 by friends turned co-founders Ibrahim Abudyak and Hiba Balfaqih, they were motivated to open doors to the Al-Quoz based company during a time of struggle for both of them: Balfaqih was going through massive grief after losing her grandmother, while Abudyak was dealing with losing a corporate job and a divorce at the same time.

Designed to be a break from the everyday routine, The Smash Room is an “outlet to unleash our pentup frustrations, a way to place what’s stressing us out into a lifeless object, and then smash those stressors to bits.” As for why one would want to do this, Abudyak replies: “It’s hard to explain, other than it just feels so darn good!” 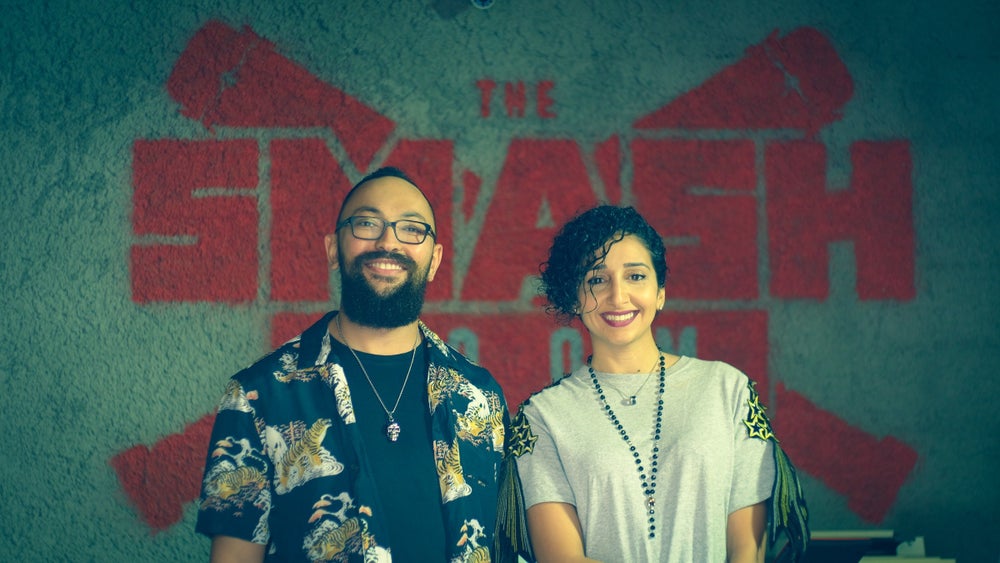 Bootstrapped with their own capital, as well as from family and friends, The Smash Room’s initial feedback was mixed. The duo managed a couple of pre-launch activities digitally to create buzz and hype, and while some people were anticipating its opening, others weren’t so keen. “Keeping in mind the cultural sensitivity of this region, some people saw The Smash Room as a waste of energy, or [they] recommended to pray when someone is angry, rather break stuff,” says Abudyak. The co-founders brushed off these comments, and had their PR efforts highlight the “positive psychological [benefits], fitness, waste management, and charity work” they aim to do, and it turned things around, as the reception for The Smash Room has been warm ever since.

The startup has had over 13,000 customers in its first year, maintained an average of AED300 per transaction, celebrated AED1,000,000 in revenue in the 10th month of operation, and are now tracking a 10% year-on-year growth rate. It has since also launched a kids-friendly smashing package, and the startup has managed to sign on its first franchise agreement after just about a year and a half of running. Plus, the co-founders claim that The Smash Room was able to breakeven in the first 10 months of opening- which, the CEO says, is to be credited to them implementing the right business practices. He advises to maintain your gross margin as on the original business plan, partnering up with the right people and companies, and most importantly, having a consistent customer experience. 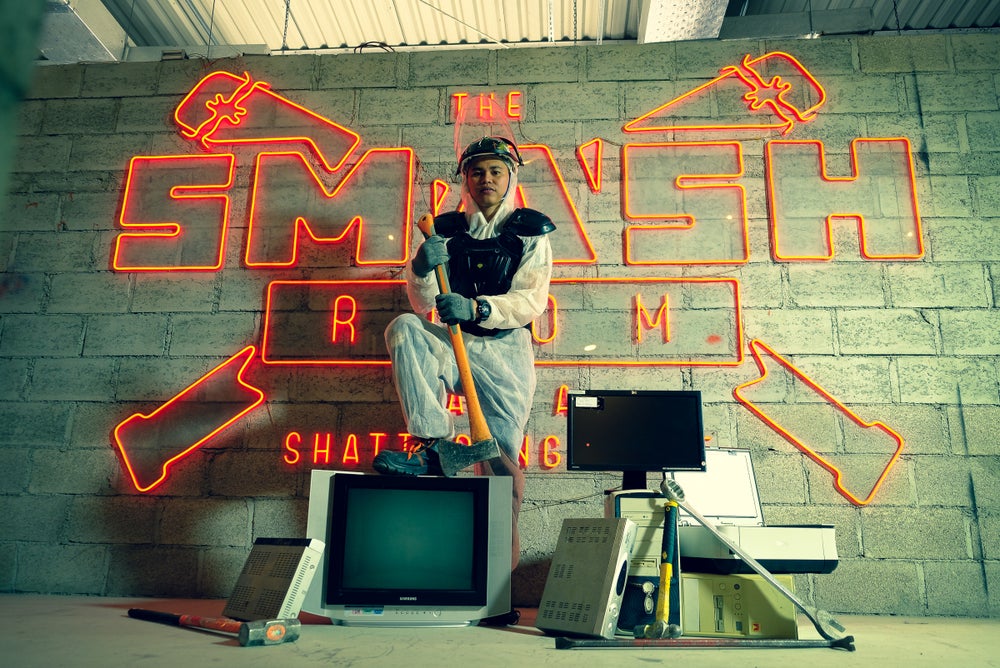 What a lot of people don’t know about The Smash Room, says the CEO, is that underneath the skin, there are many sophisticated and systematic businesses processes and practices. For example, they have an online inventory management system, full standard operating procedures, and an operation manual. Adding these to a simple concept was one of their biggest challenges, as they faced a couple of complications. Abudyak emphasizes, “The key was to be able to automate as many processes as possible at the backend, while maximizing the human element at the front end.” For the novel concept, the duo see franchising as their way to scale their venture: “I believe that there should be a Smash Room in every big city around the world right now!”

The startup offers packages ranging from AED99 to AED599 -which includes protective gear and smashing equipmentthat would allow you to take your pick from three air-conditioned smashing rooms that can accommodate two or three people, as well as groups of up to six. Plus, they have plenty of add-ons to make it a distinct experience- from smashing a laptop, to a washing machine, and to a printer. They also offer corporate team building packages that go up to 50 team members at the same time, plus private parties such as birthdays, stag do’s, and even breakup and divorce parties, and pop up shops at outdoor locations and events. 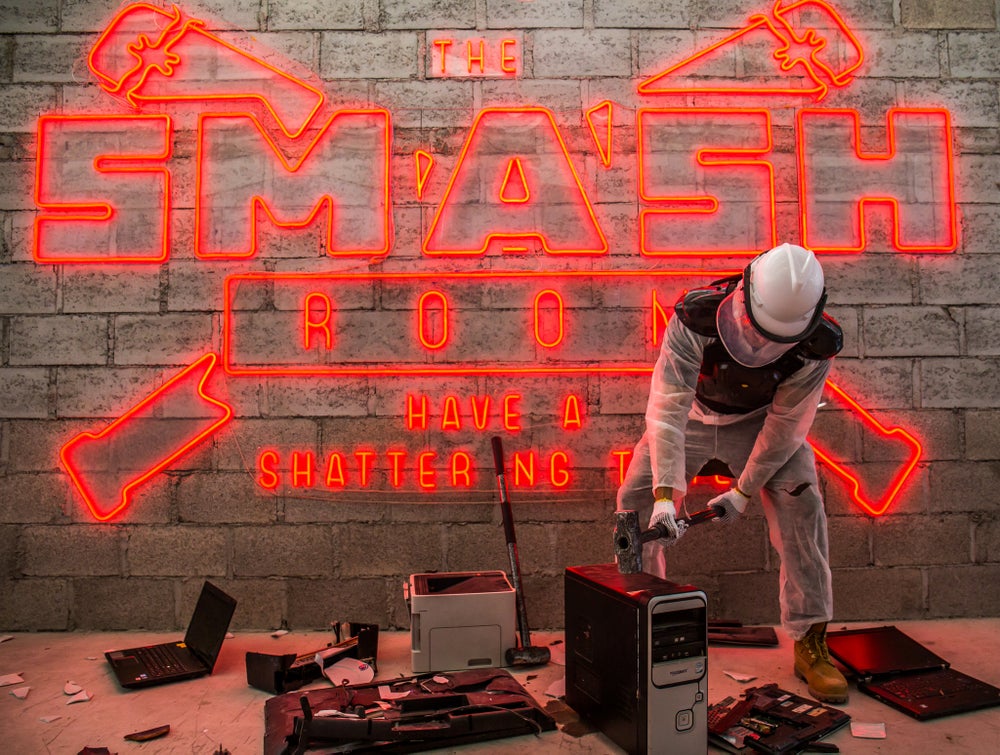 Their items are either bought from different sources (90% is their inventory), and they also welcome donations of unwanted items that can be destroyed (and which the startup aims to recycle). Safety-wise, the duo says they have implemented both passive and active safety measures- from fully protective gear, to the safety briefing done in the rooms, all the way to the cameras monitored by team members to make sure everyone is safe.

As a business that encourages an alternative approach to relieve tension and have fun, the co-founders notes the necessity to make time for such activities. “Mental health is often overlooked, yet it has that silent effect on one’s wellbeing,” says Abudyak. The CEO likens the experience at The Smash Room as a sanctuary for anyone to “experience the freeing invitation to smash everything in sight,” including a box of your own stuff- “or an ex’s!” “You can come to the Smash Room and shatter, break, stomp, tear, yell, and embrace an animalistic release you can only find here- a therapy that doesn't involve reflection, a meditation that doesn't involve soul searching. The Smash Room is some sort of badass version of a spa day, it is the prescription you need when you are about to explode.” 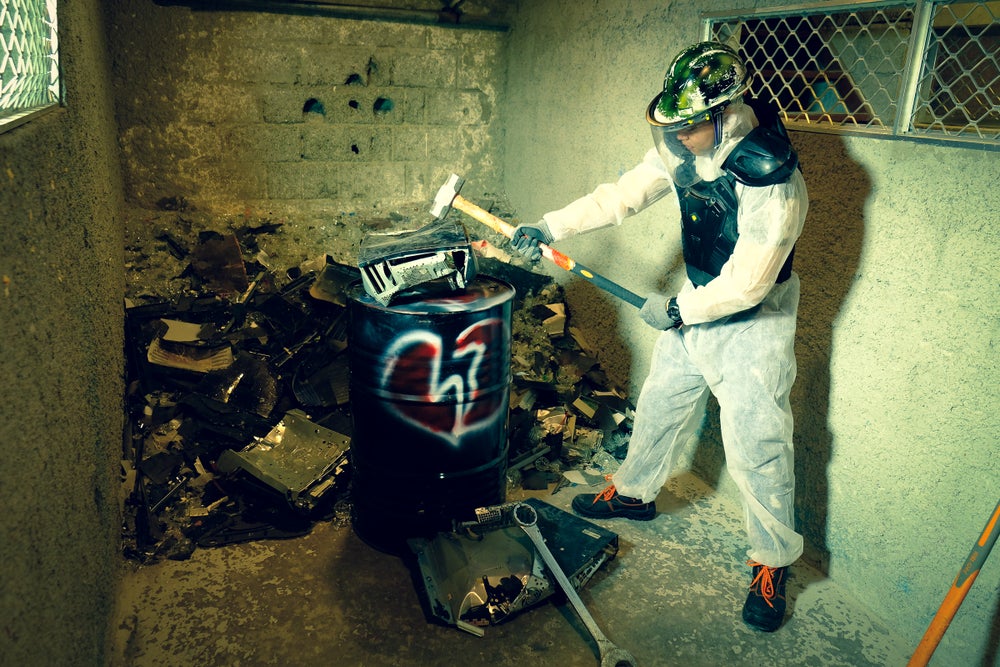 Even the CEO admits to smashing things at The Smash Room on a regular basis. Staying passionate and healthy while on the hustle isn’t that easy, says, Abudyak. He points out that people may have the tendency to forget themselves while trying to make things work, which is why it’s important to surround yourself with people “who can push me to the limits, and remind me that I should always take care of my body and soul.”

On that note, I asked how they handled rejection, to which Abudyak replies, “Rejection is another reason to work smarter and harder on your idea or proposal.” And for what they have planned for the coming year ahead, Abudyak says it’s all about focusing on their franchising business. With their first franchise secured, their goal is to eventually have 40 franchises around the globe in five years. “We do have may creative ideas and surprises still up our sleeves, so you better stay tuned!”

Related: The Personal Impact Of Leaving A Corporate To Create A Startup 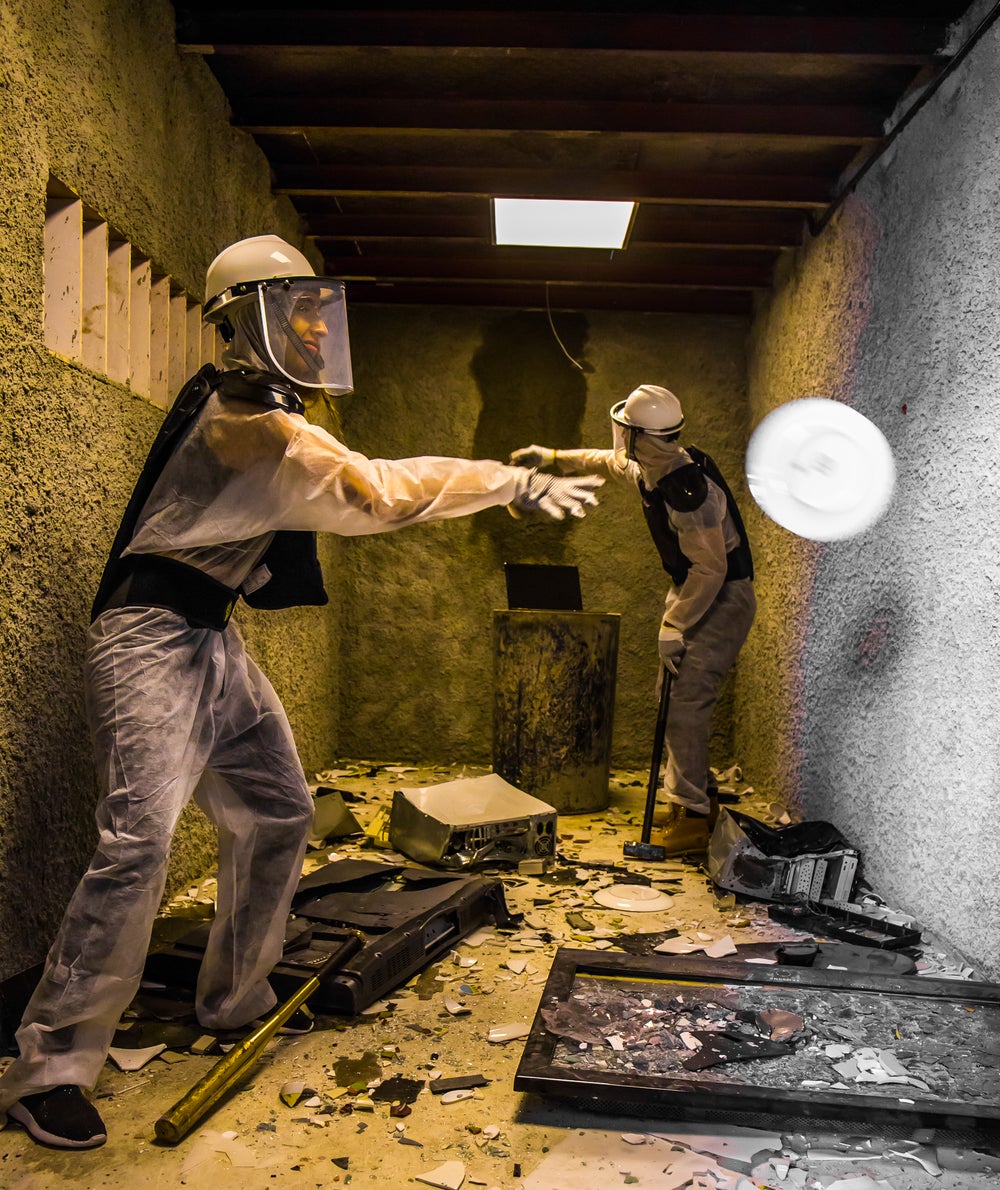 What are the factors that entrepreneurs should keep in mind (but often forget)?

“First, team is over everything else. If you get your team right, you’re halfway through success. Second, look for people who compliment your skillset rather a copy of your own. And finally, money is an illusion; the road is never as rosy as it sounds these days. Focus and perseverance are vital if you want to make it.”

Related: The Impact Of Chronic Work Stress On Your Employees