Do You Use Google Takeout? The Company Might Have Leaked Your Data To Strangers

By Shreya Ganguly February 5, 2020
Opinions expressed by Entrepreneur contributors are their own.
You're reading Entrepreneur India, an international franchise of Entrepreneur Media.

With increased penetration of the Internet, comes the risk of cyberattacks and data leak. Several instances of cyberattacks and breaches had been reported in India since 2018, especially instances of data leakage via social media sites have also been high. Social media leakages have garnered more attention after Facebook-Cambridge Analytica fiasco was revealed. Due to this, social media companies have been facing heat across the globe for not making enough efforts to safeguard users.

In the most recent case, US-based search giant Google admitted that it had accidentally sent personal videos of some of its Google Photos consumers who used its 'Takeout' service to strangers. For the uninitiated,  the Takeout service allows Google products users to export their personal data to a downloadable archive file.

According to the search giant, only less than 0.01 per cent of Google Photo users who requested for export of their data via Takeout service were affected in this glitch. However, Google Photos reportedly has more than one billion users, so the small percentage is bound to have affected a significant number of people.

Google has notified the potentially affected users via email. According to several media reports, Google said that due to a technical issue, users who requested to download their data have been affected. 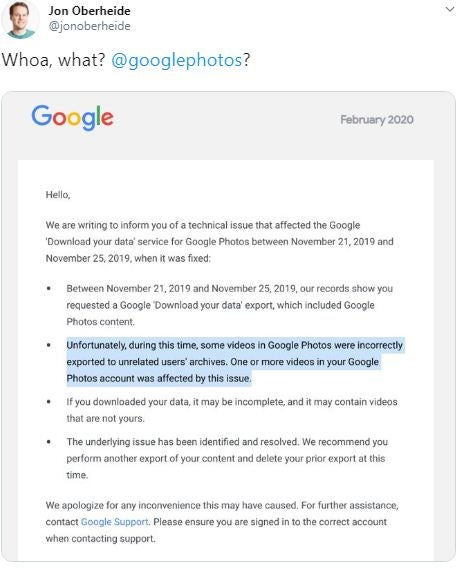 Google reportedly said that it has fixed the glitch. However, the affected users might have received either an incomplete archive, or videos of other users. Google claimed to have conducted  in-depth analysis to help prevent this from ever happening again.

Social media companies have been pulled up several times in India due to lack of proper efforts to safeguard users online. Due to increased instances of cyberattacks, the central government has been pushing for data localization under which Internet companies will be mandated to save user data on local servers only. This move will safeguard India users during international data breach incidents.

In November 2019, the Facebook-owned messaging app WhatsApp returned disappointed after the Reserve Bank of India told Supreme Court that the company is not compliant with data localisation norms. The central bank asked NPCI to not allow a full-scale launch of WhatsApp Payments in India.

The decision came in after reports revealed that spyware ‘Pegasus’ snooped into the phones of 1,400 people across the world in early 2019 through WhatsApp. The Facebook-owned messaging platform had filed a case against Israel-based surveillance firm NSO Group in the federal court, accusing them of allegedly being involved in the breach.

According to WhatsApp, the company came across the cyberattack in May 2019 wherein its video-calling feature was compromised to send malware to users. According to media reports, through this attack, NSO helped the government spies get access to the phones of 1,400 users across four continents. The targets were mainly diplomats, political dissidents, journalists and senior government officials. “This attack was developed to access messages after they were decrypted on an infected device, abusing in-app vulnerabilities and the operating systems that power our mobile phones,” WhatsApp said in a statement.

Apart from social media sites, data is also being leaked from government portals. In a written response to Lok Sabha’s query, ministry of electronics and information Technology had said that 48 government websites were hacked as of October 2019.