Gaana is followed by JioSaavn, Wynk and Spotify

By Shreya Ganguly February 25, 2020
Opinions expressed by Entrepreneur contributors are their own.
You're reading Entrepreneur India, an international franchise of Entrepreneur Media.

Content consumption trends are changing in India with deeper penetration of Internet and cheap mobile data. Gone are the days, when users had to wait for their favourite songs to be played on radio channels or burn audio files to compact discs. With the rise in number of audio streaming players, users can now play their favourite music anywhere and anytime.

Increasing demand for audio streaming has, however, fueled the competition among players. According to the recently released first OTT Audience Measurement Insights report by Kantar and VTON, Times Internet-owned music streaming app Gaana emerged as the market leader with 30 per cent market share in over-the-top (OTT) audio streaming space. Gaana is followed by JioSaavn, Wynk and Spotify. 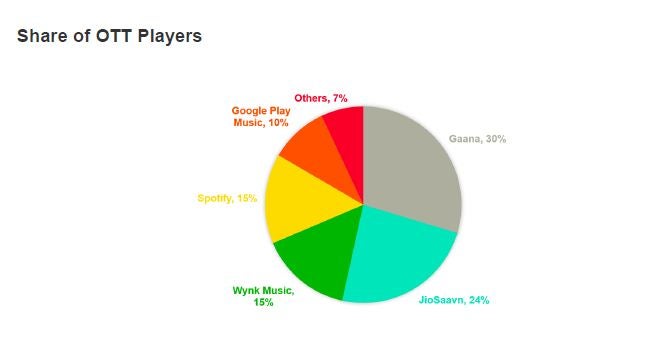 “The year 2020 will be ‘the battle for the ear’ as OTT audio platforms are shaking up the music market—especially, by creating an intense competition between radio and OTT audio platforms. Today listeners are spoilt for choice as far as content consumption is concerned and move across the platforms to fulfill their entertainment needs,”  said Hemant Mehta, managing director, insights division and chief strategy officer, Kantar South Asia.

The study which draws its result from a robust sample size of over 9,000 stretching across top 9 cities 13 million adults in India listened to any OTT streaming app in the last 30 days. According to the report, Indian users approximately spend 86 minutes on Spotify, 63 minutes per day on Gaana, 49 minutes on Jio Saavn and 40 minutes and 39 minutes per day on Google Play Music and Wynk.

The report revealed that Delhi and Mumbai are the largest OTT audio streaming markets with at 25 per cent share followed by Kolkata and Bangalore standing at 11 per cent  and 10 per cent, respectively. 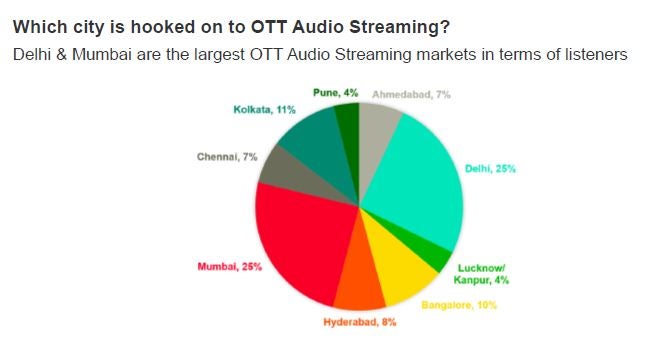 Mumbai also tops the chart in terms of time spent on music streaming with 44 per cent share followed by Delhi at 25 per cent and Bengaluru at 10 per cent.

The report also revealed there is a strong correlation between radio and streaming audio as OTT services are thriving in markets where radio listenership habits are not strong.

The competition to the top is increasing with increasing number of players looking to strengthen presence in the OTT audio streaming market. Recently in December 2019, Gaana announced the launch of its exclusive line-up of podcasts and shows. According to the company, this move is a part of its aim to provide a diverse range of original audio content by the end of FY 2021.

According to a report by Redseer, the Indian OTT market is projected to grow 80 per cent from 170 million in 2019 to 300 million by 2022. According to the PwC report, India is the world's third-largest podcast market after the US and China.