Pay attention to expenses and double down on what works.

March 31, 2020
Opinions expressed by Entrepreneur contributors are their own.

Growing up near Houston, Matt Clark didn’t seem destined to be an entrepreneur. He struggled after his parents divorced, comparing himself to kids with two-parent homes and seemingly happy lives. In high school, he hung out with kids going nowhere, doing drugs, and even selling drugs.

Fortunately, he never got into some of the same legal trouble as his friends. Still, Clark recognized his risky behavior threatened his hazy but ambitious dreams of one day running a business. He knew he needed change. Clark left Houston without telling any friends and spent the summer in Austin, Texas, to reset and distance himself from bad influences.

Clark’s aimlessness finally began to dissipate during his sophomore year of college, when he read The Success Principles, by Jack Canfield. “It was like the book was written for me,” he says, remembering how he tore through it within days. “It sparked my passion for entrepreneurship.”

That passion proved a powerful driver: He joined the college’s business-plan team as part of the undergraduate entrepreneurship program, and graduated near the top of his class with dual degrees.

But after graduating in 2008 amid the economic crash, Clark sought refuge in an investment banking job at Citigroup rather than pursue his then-hazy entrepreneurial dreams. “I didn’t know what I wanted to do at the time, and someone told me to work for a big corporation for three to five years and learn the ropes,” he recalls. But almost immediately, Clark realized that following standard advice would only get him mediocre returns. To build something huge — something bigger than he could even imagine — he had to follow his gut and fast.

Clark skipped the hand-wringing and second-guessing to quit his banking gig just seven months into the job to launch a website selling health supplements. When he expanded to Amazon soon after, he watched in disbelief as his sales mushroomed, far eclipsing the site’s volume. Soon his business had surged from selling 10 to 11,000 products on Amazon.

To fuel that astronomical growth, Clark immersed himself in the then-fledgling community of ecommerce entrepreneurs. He attended seminars about Google advertising and read every sales and business book. “This helped me go from zero to $2 million in revenue, but I was scaling so fast that I wasn’t tracking anything,” says Clark, who was so focused on that top-line number he didn’t pay attention to things like hard-line expenses, labor and profit margins. If he had, he would have quickly seen that his booming business was operating in the red.

This unsustainable growth came to a head when he got a six-figure credit card bill and realized he didn’t have the cash flow to make the full repayment. “I’d been so focused on sales that I didn’t pay attention to my expenses,” says Clark. “I realized I had to learn to produce profits, not just sales.” 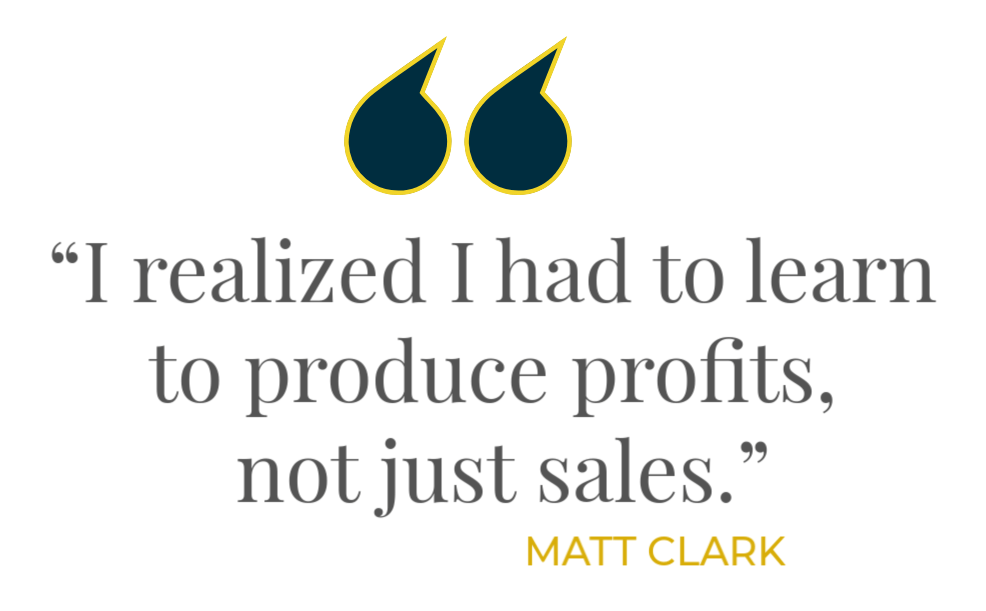 Facing such financial strain, some entrepreneurs might have tightened their belts. Clark made another bold move instead: scraping his bank account almost clean to spend $10,000 to attend one of renowned life coach Tony Robbins’ Business Mastery events — even though he was barely making ends meet. “I was desperate,” he recalls. “I needed to meet others as motivated as me and figured anyone willing to pay $10,000 must be pretty motivated.” 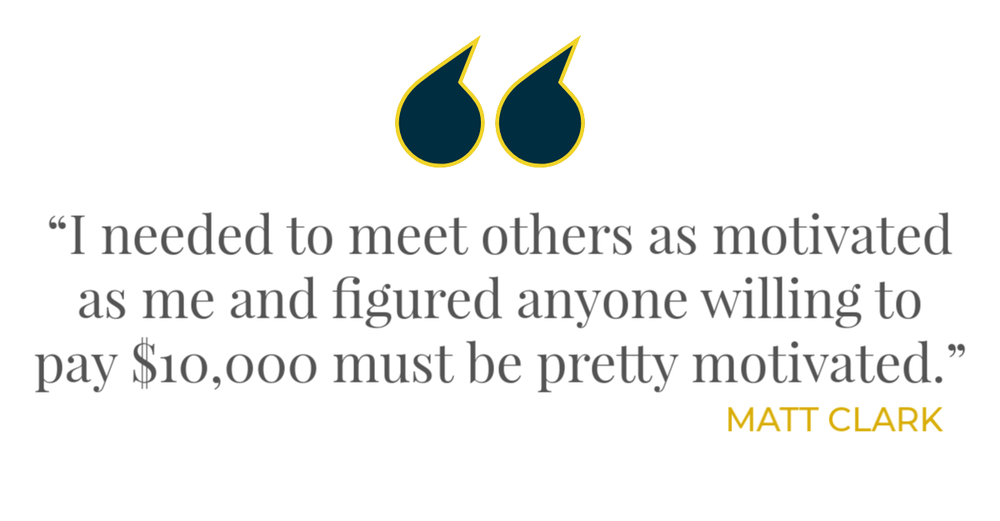 There he met someone who later introduced him to Jason Katzenback, a serial entrepreneur who was looking to dive into the next big idea. Together, they decided to help aspiring entrepreneurs build ecommerce companies while avoiding Clark’s mistakes. “I learned how to build a business in college and attended all these courses and events, but I encountered lots of challenges,” says Clark. “There was a better way to teach this stuff.”

With Clark’s supplement business now out of the picture, he was able to focus on building a new company with Katzenback: Amazing.com. One of their programs, Amazon Selling Machine, helps people create private-label businesses selling physical goods on the rapidly growing platform.

They guide students step by step, from choosing a product to sell and finding suppliers to marketing. The videos, community support and access to business tools usher newbies through the sometimes painful early stages. Customers can also leverage a mentor network to connect with someone who has successfully navigated similar challenges. 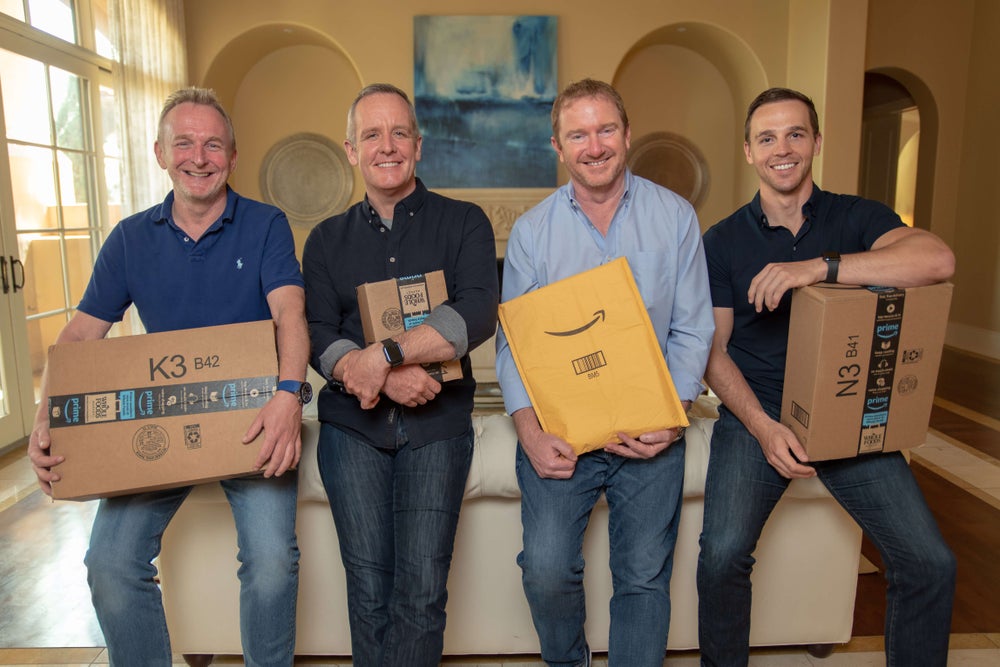 Amazing urges entrepreneurs to focus on high-quality products and take packaging seriously. “It sounds crazy to me now, but I didn’t do that with my supplement company,” admits Clark. “In my rush to get a business up and running, I sold the first thing I could get my hands on. Some of my early products had terrible packaging, while the ingredients were pretty much the same as everyone else’s.”

Clark counsels sellers to picture a real person — someone like their mother, brother or daughter — who will experience the product. “The better you can make that experience, the more likely your business will succeed long-term.”

Not Living Up to the Amazing Name

By 2015, Amazing.com hosted Richard Branson at their annual live event and had a team of around 50 working at its Austin headquarters — but the company was teetering on the edge of ruin. That year, Katzenback’s daughter was diagnosed with cancer, prompting him to quit the business temporarily to focus on family and leaving Clark to steer the ship solo. 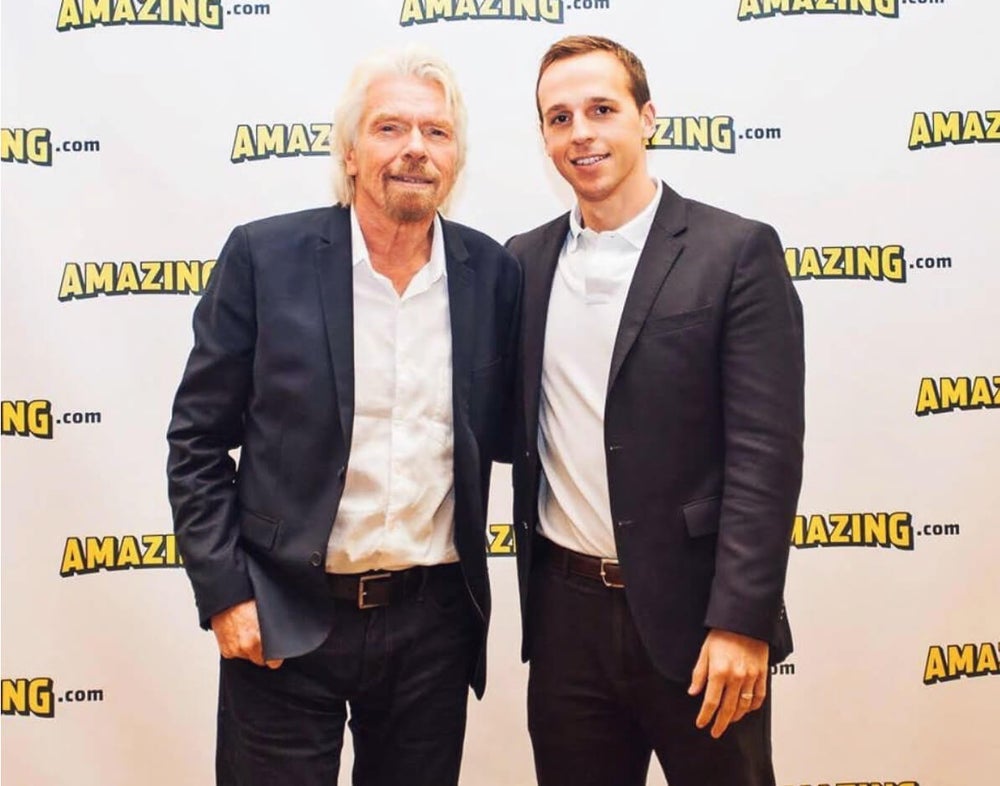 Amazing.com hosted Richard Branson at their 2015 annual event but was on the brink of ruin.
Image Credit: Matt Clark

While Katzenback was away, Clark pivoted Amazon Selling Machine from a premium-priced, intensive course to a low-priced monthly membership, hoping to help even more people build businesses. “I tried to go wide to appeal to everyone instead of going deep into a niche,” he explains.

“I made several bad decisions fueled by blind optimism and ambition,” he shares candidly. “I thought, What got us here won’t get us where we want to go. So I completely threw away our main product.

“We were stuck with a massive operational load, including $40,000 monthly rent, and were burning through half a million dollars every month,” he continues. “I had to lay off half my team and came within a week of running out of cash.” Clark found the experience personally devastating — he couldn’t sleep, eat or bear to let his mind linger on the employees he’d lost.

But he also recognized that the Amazing.com live events were a bright spot. The company continued to host the live events, and the joy he saw on members’ faces was like a salve for his soul. “They kept telling me that our original program changed their lives,” says Clark. “I realized we just needed to do what worked.”

Humility, Discipline and the Right Kind of Growth

Clark refocused the business on the original, premium ecommerce training program. By slowly expanding from there, he is looking forward to sustained growth.

He shares that the struggles taught him humility and how to spot customers who are about to make similar mistakes with their businesses. Most importantly, it taught him to be careful about hiring because others’ lives are affected.

Clark also advises not to become too risk-averse. He counsels his customers to manage risk carefully so they can aggressively pursue their targets. “We could have discovered that the new product didn’t work by simply testing it before we threw away our flagship product,” he points out.

Now that Clark knows how to take smart risks in business, he also combines caution with adrenaline in his personal life. He practices Brazilian jiu-jitsu several times a week and has spent his off-time earning his helicopter pilot’s license in Hawaii and attending Porsche driving school.

“I recharge by doing activities that consume me,” says Clark. “Pushing so hard in business burned me out; but when you’re sitting in a giant metal bucket for 12 hours a day trying not to kill yourself, you can’t think about anything but flying. I felt a million times better when I came back.”

In the end, he says building a business is like martial arts or driving a race car — it’s all about remaining disciplined while taking calculated risks and leaning into the obstacles.

Connect with Matt Clark on his website and Instagram. Learn how to build an Amazon business at Amazing.com.