From Devita Saraf, The Only Woman, To Ritesh Agarwal,The Youngest; Here's India's Wealthiest Self-made Entrepreneurs Under 40

The total valuation of all the entrepreneurs mentioned in the IIFL Wealth Hurun India 40 & Under Self-Made Rich List 2020 is INR 44,900 crore which is a staggering 59 per cent increase from last year

The list consists of self-made entrepreneurs who are below the age of 40 and have a wealth of INR 1,000 crore or more. The total valuation of all the entrepreneurs mentioned in the list is INR 44,900 crore which is a staggering 59 per cent increase from last year.

“Some of them have fully or partly exited their core businesses and are setting up investment funds and backing other young entrepreneurs. This will have a compounding effect on the growth of disruptive entrepreneurship in India”, he further added.

Of the 12 startups covered in the list, 11 are unicorns or have been unicorns at some point of time. Interestingly, the report notes that with nine individuals, the city of Bengaluru is the most opted for business headquarters  among young entrepreneurs followed by Gurugram/New Delhi.

Bengaluru-based Nitin Kamath and Nikhil Kamath with wealth of INR 24,000 crore topped the list of IIFL Wealth Hurun India 40 & Under Self-Made Rich List 2020. Both of them co-founded Zerodha, an online trading platform in 2010. The startup which was initially bootstrapped, in August this year claimed to have a unicorn valuation of $1 billion.

Udaan co-founders Amod Malviya, Sujeet Kumar and Vaibhav Gupta together clinched the third spot with a wealth of INR 13,100 crore. The report noted that they were the biggest wealth gainers as their wealth increased by 274 per cent. Founded in 2016, Udaan is the fastest startup to enter the coveted Unicron club in just three years in 2019.

The youngest among the 16 richest self-made entrepreneurs in the list was Ritesh Agarwal of Oraval Stays, popularly known as OYO. He grabbed the ninth spot with a wealth of INR 4,500 crore. The pandemic with stringent lockdowns has led to the back pedal of OYO’s growth story in the country, thus declining Agarwal's wealth by 40 per cent at INR 3,000 crore.

The only woman present in the list was Devita Saraf with a wealth of INR 1,200 crore at the 16th spot. She derives her wealth from Vu Technologies, a television manufacturing company, which she founded in 2006. 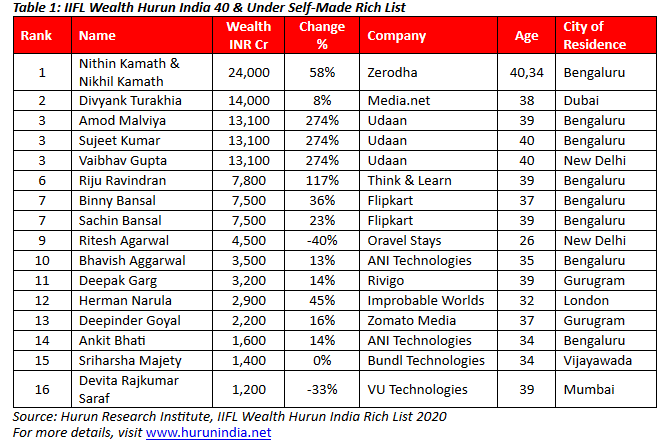