Jack in the Box will be taking over a tracker that lets customers know when McDonald's ice-cream machines are broken.

We've all been there before.

There are far fewer feelings worse than getting all the way to McDonald's only to find out that the McFlurry or ice-cream cone you've been craving can't be yours because the ice-cream machines are broken.

What began as a joke and somewhat of an urban myth (that is, the ice-cream machines seemingly always being broken) quickly gained traction in the mainstream, with one disgruntled customer even going so far as to create a broken ice-cream machine tracker online aptly called McBroken.com

Now, famous rival chain Jack in the Box is looking to capitalize off both the tracker and the unreliability of the ice-cream machines at the Golden Arches by taking over McBroken.com for the rest of March.

The new map for March will not only show which McDonald's locations have functioning and non-functioning ice-cream machines but will also point customers into the direction of the nearest Jack in the Box by labeling each location on the map.

Earlier this month, McDonald's brought back its beloved Shamrock Shake, a minty-flavored green concoction that comes and goes each year around St. Patrick's Day.

According to McBroken.com data, a whopping 10% of McDonald's ice-cream machines in the country have been down since the shake was reintroduced to customers this year February 21. 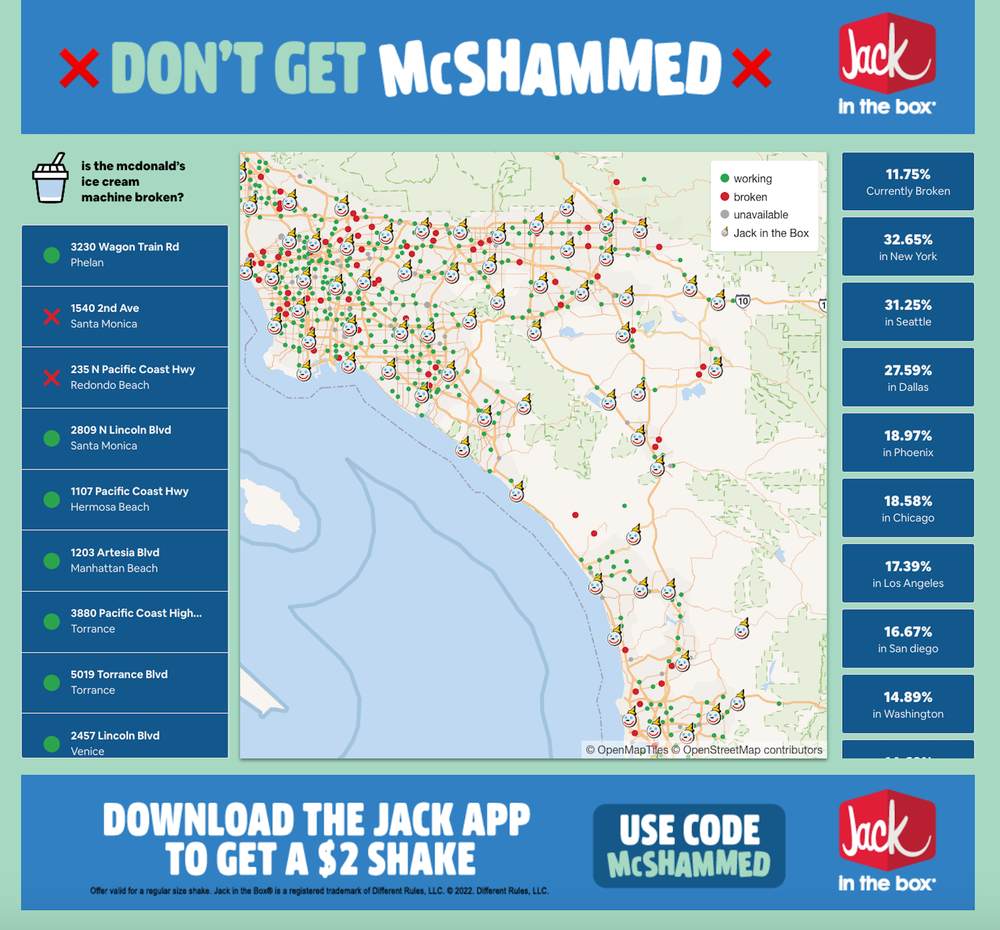 In an effort to capitalize off of sweet-toothed customers, the Jack in the Box takeover will also serve to promote the chain's new Oreo Cookie Mint Shake which is in direct competition to the famed Shamrock Shake.

"Though we are but little ... our machines work,' Jack in the Box said in a release.

The campaign comes at a contentious time for McDonald's regarding its ice-cream machines as the fast-food titan was just slammed with a whopping $900 million lawsuit by start-up company Kytch.

Related: The FTC Is Investigating Why the Ice Cream Machines at McDonald's Are Always Broken

The company, which created device meant to fix McDonald's broken machines, got in to it with McDonald's in 2020 when the fast-food chain asked franchisees to remove the device from all machines as there were claims that "serious human injury" could occur as a result of using the product.

"They've tarnished our name. They scared off our customers and ruined our business," Kytch co-founder Melissa Nelson said in a statement to Wired. "They were anti-competitive. They lied about a product that they said would be released. McDonald's had every reason to know that Kytch was safe and didn't have any issues. It was not dangerous, like they claimed. And so we're suing them."

McDonald's was up 14.79% year over year as of Friday afternoon.