Mukesh Ambani Is Ninth Richest Man In The World: Report

The global ranks of Indians in the 2022 M3M Hurun Global Rich List is moving up fast. With a total wealth of $103 billion, Mukesh Ambani, Asia's richest man, becomes the only Indian to enter the top 10 in the list. His wealth registered a 24 per cent increase. 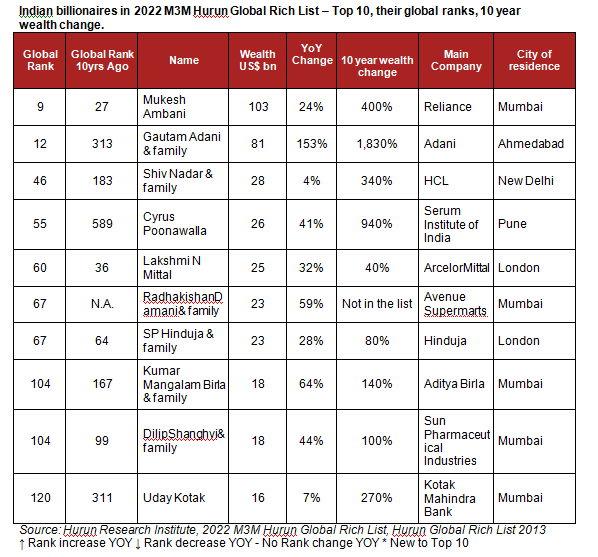 With a 153 per cent increase in wealth, Gautam Adani and family, becomes the second richest Asian. Gautam Adani is the biggest gainer in the 2022 list and added $49 billion to his wealth last year, which is more than the net addition of wealth by top three global billionaires such as Elon Musk, Jeff Bezos, and Bernard Arnault. After the listing of the renewable energy company Adani Green, Gautam Adani's wealth increased nearly five times to $81 billion from $17 billion in 2020, said a release.

"2022 M3M Hurun Global Rich List is aimed at demonstrating the positioning of Indian wealth creation when compared to the rest of the world. The list evidences India as a rocket ship when it comes to wealth creation. For instance, India ranks third based not only on the number of billionaires but also in terms of the number of billionaires who have added at least a billion dollars to their wealth. Over the last 10 years, Indian billionaires added circa $700 billion to their cumulative wealth – this is equivalent to Switzerland's GDP and twice the GDP of UAE!" said Anas Rahman Junaid, MD and chief researcher Hurun India.

Hurun Report is a leading research, luxury publishing and events group established in London in 1998 with presence in India, China, France, UK, USA, Australia, Japan, Canada and Luxembourg. It is widely recognized world-over for its comprehensive evaluation of the wealthiest individuals across the globe.