Should You Scoop Up Shares of 23andMe?

23andMe (ME) saw its shares slump in price after it reported its fourth-quarter earnings results last month. However, given the company's multiple FDA authorizations for over-the-counter genetic health risk reports,...

By Pragya Pandey June 6, 2022
This story originally appeared on StockNews

23andMe (ME) saw its shares slump in price after it reported its fourth-quarter earnings results last month. However, given the company's multiple FDA authorizations for over-the-counter genetic health risk reports, would it be worth scooping up its shares now? Read on, let's find out.

23andMe Holding Co. (ME) in Sunnyvale, Calif., is a renowned consumer genetics and research company. As the only company with several FDA authorizations for genetic health risk reports, 23andMe has pioneered direct access to genetic information. The company has built the world's largest crowdsourcing platform for genetic research, with 80% of its customers signing in.

The company's shares are down 72.9% in price over the past year and 33.5% over the past three months to close yesterday's trading session at $2.70.

The genetic-testing firm saw its loss increase in its fiscal fourth quarter and published guidance that implies the loss will increase. The company stated that it prioritizes cash burn over sales growth within its personal genomic service and telemedicine consumer businesses. 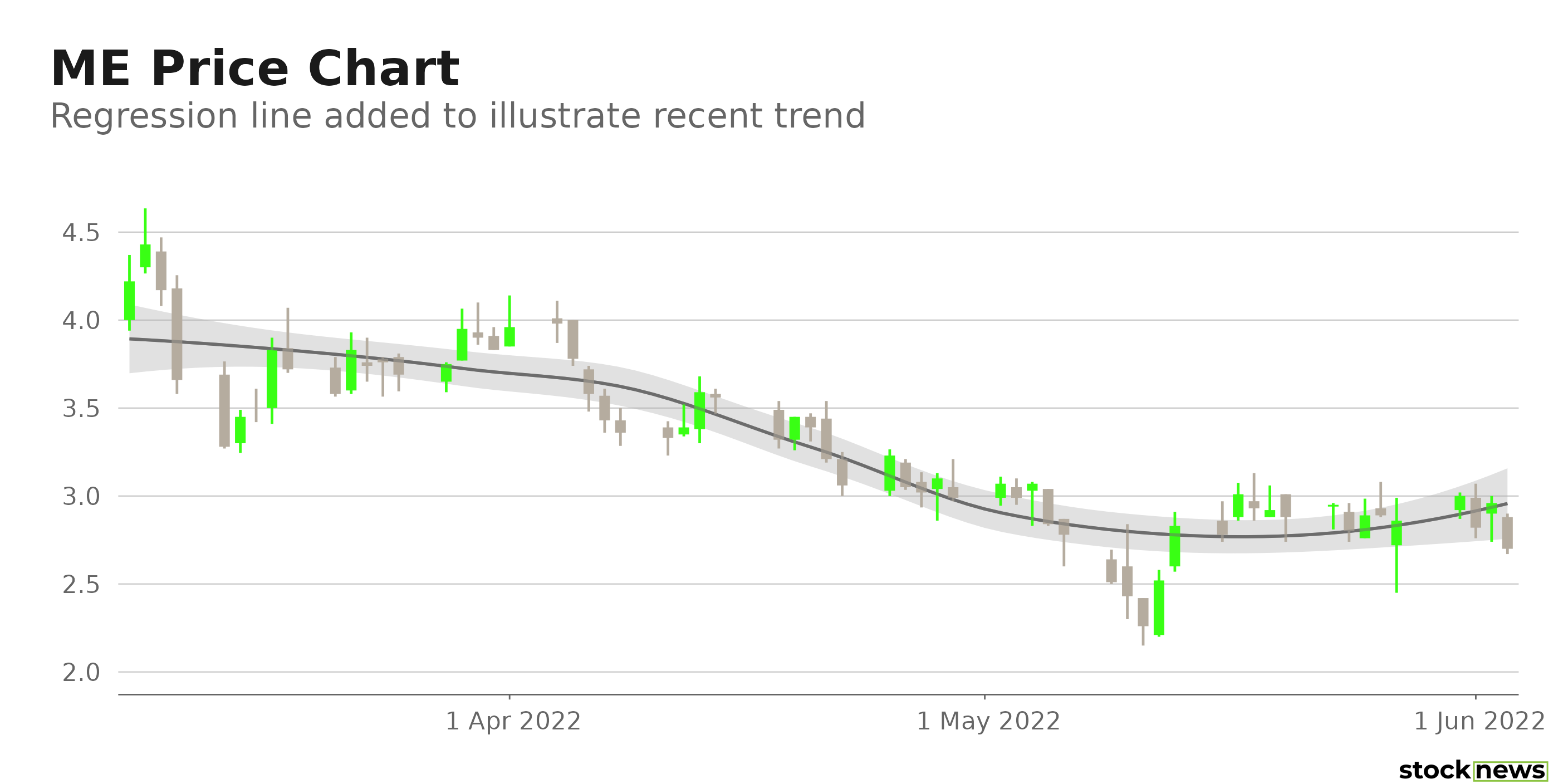 Here is what could shape ME's performance in the near term:

ME has an overall D rating, which equates to Sell in our proprietary POWR Ratings system. The POWR ratings are calculated by considering 118 distinct factors, with each factor weighted to an optimal degree.

Our proprietary rating system also evaluates each stock based on eight distinct categories. ME has a D for Stability and Quality. The Stability grade represents higher stock volatility than its peers. In addition, the company's poor profitability is consistent with the Quality grade.

Among the 52 stocks in the D-rated Medical – Diagnostic/Research industry, ME is ranked #40.

Beyond what I have stated above, you can view ME ratings for Growth, Value, Momentum, and Sentiment here.

ME's deteriorating fundamental performance could raise investors' concerns over its prospects. In addition, analysts expect its EPS to decline 45.5% in the next quarter (ending Sept. 30, 2022) and 7.8% in the current year. Furthermore, the stock is currently trading below its 50-day and 200-day moving averages of $3.17 and $6.34, respectively, indicating a downtrend. So, we think the stock is best avoided now.

How Does 23andM Holding Co. (ME) Stack Up Against its Peers?

While ME has an overall D rating, one might want to consider its industry peers, Global Cord Blood Corporation (CO), Qiagen N.V. (QGEN), and Agilent Technologies Inc. (A), which have an overall A (Strong Buy) rating.

ME shares were unchanged in premarket trading Monday. Year-to-date, ME has declined -59.46%, versus a -13.29% rise in the benchmark S&P 500 index during the same period.

The post Should You Scoop Up Shares of 23andMe? appeared first on StockNews.com