10 Profitable Reasons to Major in Math or Science

By Sarah O'Brien
June 15, 2015
This story originally appeared on CNBC

Good news for all you math and science whizzes out there: You sort of own the job market.

Most of the top 10 best jobs—based on work environment, income, job outlook, stress and other factors—call for backgrounds in those two fields, according to a recent report released by career website CareerCast.com.

"We see every year that STEM [science, technology, engineering and math] jobs are rising on the list for a variety of reasons," said Tony Lee, publisher and editor for CareerCast. "Their hiring outlook, salary, better work environment brought on by competition for employees … all walk hand-in-hand to make these jobs more appealing than any others."

CareerCast annually examines the 200 most populated U.S. jobs and then ranks them based on a variety of metrics. Lee said that while there are three health care–related jobs in CareerCast's 2105 Jobs Rated Report, they used to dominate the top of the list. Now STEM jobs have taken over.

"The jobs that are rising into the top 10 are jobs that didn't even exist a few years ago," Lee said.

Basically, actuaries analyze statistics to determine the financial consequences of current and future risk. They often work for insurance and financial companies, along with an array of other businesses.

An actuary also is a specialized job with specific education and training requirements. Actuaries must hold a bachelor's degree—typically with a math or business bent—and pass a series of exams to become certified professionals.

"The exam process is rigorous and relies on the individual to self-study," said Brad Paulis, a partner at CCRC Actuaries. Because of those things, he said, actuaries generally enjoy good job security because there aren't easily replaced.

And, he added, most actuaries truly enjoy mathematics and problem-solving.

"Often our problem-solving extends beyond math into other areas, but the process is why we entered the profession," Paulis said.

Audiologist ranked second on the list, making it one of three health care–related jobs in the report's top 10. An audiologist diagnoses and treats patients' hearing and balance problems using advanced technology and procedures.

Becoming an audiologist requires earning a doctorate degree, along with getting licensed in the state in which you work.

The employment outlook for audiologists is good, because the field is expected to grow at a 34 percent clip over the decade ending in 2022. Their median salary is about $70,000.

Third on the list is mathematician. These professionals do, well, math.

They work in a variety of private industries and government agencies, using advanced mathematics to develop and understand mathematical principals, analyze data and solve real-world problems. Their median pay is more than $101,000.

Statisticians use statistical methods to collect and analyze data and help solve problems in all sorts of industries. Typically, a statistician needs to have a master's degree or higher. Their median income is about $76,000.

In the fifth spot is biomedical engineer. Often armed with a degree in biomedical engineering, these professionals analyze and design solutions to solve problems in biology and medicine. The goal is to improve the quality and effectiveness of patient care.

In sixth place is data scientist, which Lee said has never been included in the report until now.

The job is growing in popularity because, with businesses having tons of data at their disposal, someone needs to have the skills to break down raw numbers into easily digested information. Data scientists' median annual salary is $124,000.

Rounding out the top 10 are dental hygienist (No. 7), software engineer (No. 8), occupational therapist (No. 9) and computer systems analyst (No. 10). 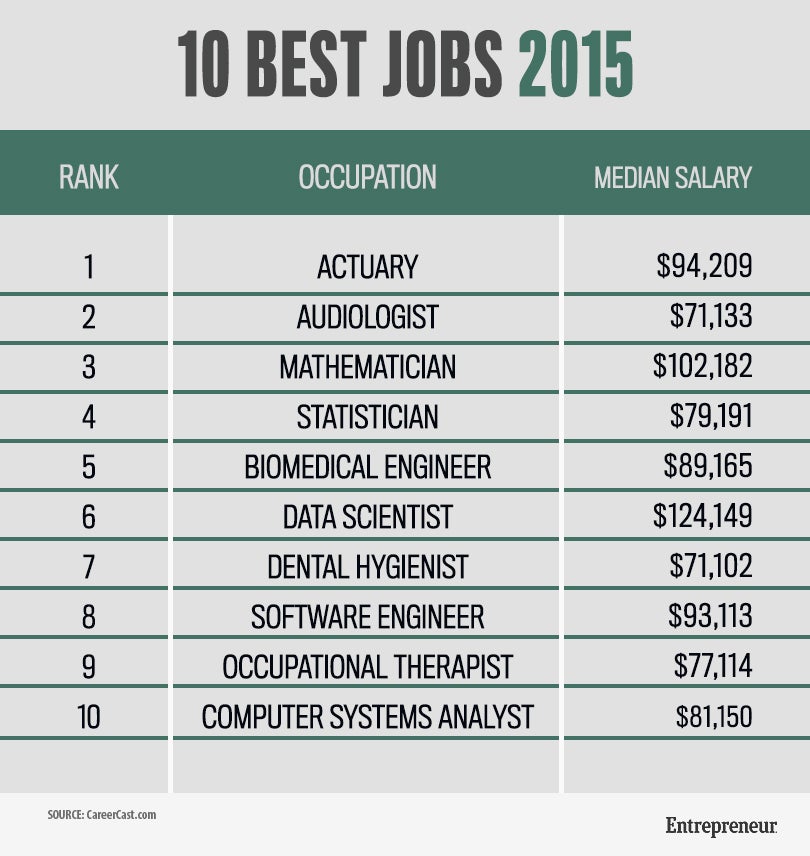 The other positive aspect for job seekers interested in these fields is the effect that competition has on hiring packages.
For instance, new research shows that job seekers increasingly want more say in when and where they do their job.

"What we're seeing is lots of people out there wanting flexible work arrangements," said Tara Sinclair, chief economist for global job search engine Indeed and head of its Hiring Lab research arm, which just released a report called "The Talent Driven Economy," which looks at the emerging interests of job seekers.

She said that during the last recession, when the job market was tight, employers pulled back on providing flex hours or allowing telecommuting.

"I think we're going to see a dramatic shift back to remote work and jobs that explicitly allow work from home," Sinclair said.

Part of that is a tightening job market. The report points out that during the worst of the recession in 2009, there were 2 million job openings, or one opening for every 6.2 unemployed job seekers.

As of four or so months ago, there were 5 million job openings, or one job for every 1.7 unemployed job seeker.

Additionally, although the STEM and health-care jobs comprise the top 10 best jobs on the CareerCast list, there continues to be more jobs available than there are qualified people to fill them.

According to the Indeed report, 14.2 percent of job postings are for health-care practitioners and technicians, but less than 7 percent of job seekers are looking for those jobs.

Another disparity exists for jobs in the computer and mathematical fields: 8.4 percent of postings are for them, but just 5.5 percent of job seekers are exploring them.

Nevertheless, there has been an increase in searches for tech-related positions, which is viewed as a positive.

"There is a dominance of tech-related job searches coming from job seekers," Sinclair said. "We've talked so much about the persistent mismatch between not enough tech talent to fill the tech-job opportunities. But now there's growth in the amount of people seeking tech jobs, so that's encouraging."

Sinclair added, however, that the opportunities still are outstripping the available talent. "Almost every company needs new hires to have significant tech skills," she said. "So the growth is reassuring, but we have a long way to go."