By Karen A. Frenkel
June 14, 2013
Opinions expressed by Entrepreneur contributors are their own.

Some business ideas come on as a revelation. Others are more of a resolution.

Consider the story of Samuel Slover. After graduating from college in 2006 and doing a stint as a financial journalist, Samuel Slover, now 27, worked in Bolivia, Honduras and India for the Canadian International Development Agency, Canada's version of the Peace Corps.

While abroad, he developed social entrepreneurship initiatives, including microfinance programs, and taught English and business. Though, he felt under-qualified to teach the assigned curricula.

He knew there had to be a better way to improve the educational opportunities in spite of the lack of local expertise on the ground. Though developing countries often lag behind the West in many ways, technology adoption rates are picking up across the world.

To seize on this opportunity and bridge the expert and education gap, in 2010 Slover and his brother, who had a similar experience in Nepal and Honduras, launched Learn It Live, a web-based social-learning platform. The site's goal is to bring online education courses to those in other countries and in the U.S.

Related: How One Young Entrepreneur Built a Credit Card Processing Empire at 16 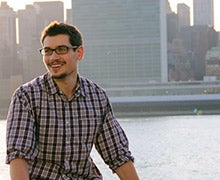 Samuel Slover co-founded Learn It Live in 2010 to help improve the state of education in the developing world and at home.
Image credit: athinkingsam.com

Currently, the site boasts more than 1,200 experts, who teach on average 50 classes a month. According to the company, about 200 of the most active experts teach more than one class a month. And tuition ranges from $10 for an online yoga class to $300 for an online certification class for topics like web development, sales and marketing, and nutrition.

The company takes a 25 percent cut of what the instructors bring in, and Slover expects revenues of about $600,000 this year. He won't disclose the number of students, but they tend to be professionals between 30 and 50 years of age.

So how is Learn It Live different from live streaming and archiving a class taught by U.S. instructors? While many companies simulcast and record their virtual classrooms for archival purposes, Learn It Live's streaming video lets instructors interact with students in real time and enables up to six students to simultaneously ask questions. They might question a chef about a recipe while he or she is cooking, for example, or ask an instructor about a spreadsheet projected on a whiteboard. The system also recognizes streaming delays due to students' individual Internet connections, and adjusts the rate of the stream to eliminate choppiness so that it doesn't interfere with watching the class.

Further, Learn It Live taps independent experts in specific niches outside of traditional academia, whereas programs like Coursera and Udacity work with large universities and their professors. By contrast, Learn It Live's instructors are typically known or published experts and the classes they teach tend to offer more practical skills such as how to build a WordPress blog or how to perfect your online brand.

"We focused on recruiting and working with experts who already have large audiences, as this helped build the student network and audience much quicker," says Slover.

"Their focus is on real time, and their course topics are more suited to real time," he says. Plus, he adds "if 130,000 students are attending a MOOC, you're more focused on delivering the educational content than on real-time interaction." But Greenberg believes Learn It Live's main advantage rests with content, not technological know-how. "The differentiation is it's early to market with its unique content," he says.

Last year, the company added Learn It Live Learning Centers, which deliver customized e-learning websites to organizations. Organizations choose the look and feel to represent their brand and preselect courses.

"If an organization wants a class on public speaking that is not currently in the catalog, for example, LearnItLive reaches out to the relevant expert in its network," Slover says. Aramex, one of the biggest transportation and logistics companies in the Middle East, with employees across the globe, created its own corporate university site powered by LearnItLive.

Slover is also a graduate student at New York University's Interactive Telecommunications program, where he and research scientist Shawn Van Every are extending a system built for streaming live events. It includes added features that let remote viewers switch between cameras in real time and make themselves present in the room to ask questions, says Van Every, 38. With a webcam and a microphone, users anywhere can initiate a streaming session, and their video will be projected on a wall. They can then indicate that they have a question or comment. When a moderator chooses them, their audio will become live in the room.

"Perhaps this project will point the way toward more interactive distance learning scenarios," Van Every says. "I believe live interaction is key and often overlooked when thinking about streaming events or classes."

How do you think online learning will change the face of education? Let us know with a comment.