The pro golfer racked up quite the bill while celebrating in Miami this week.

We've all been there — having just a little bit too much to drink and an insatiable craving for fast and fried food, instantly regretting all of our decisions the following morning when the inevitable stomach ache comes on.

For most of us, this involves stopping by the nearest pizza joint or fast food drive-thru, never really taking a financial hit but most certainly taking a general wellness one.

But when you're a professional athlete who can eat more than an average person — and afford more, too — your options are seemingly limitless when it comes to your intoxicated eats.

Just ask golf legend John Daly, who racked up an impressive $446.10 in Taco Bell delivery after a presumably very fun night out. 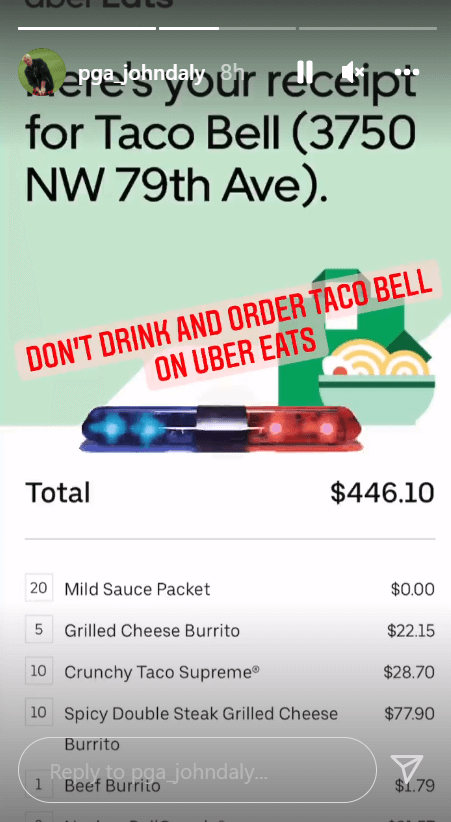 "Don't drink and order Taco Bell on Uber Eats," the athlete jokingly wrote on top of the screenshot.

Because the bill was cut off in the photo, it's between Daly and the liquor gods to know the full extent of what he ordered that night.

The Taco Bell incident went down in Miami, where Daly was having a blast at the Trump Touring Pro.

Daly is known to be one to have a good time — the ever-popular alcoholic version of the Arnold Palmer (half lemonade, half iced tea) has even been coined the "John Daly."

Safe to say this drunken order was probably just par for the course in a typical Daly weekend.

"I want to show accountability not just in words but in my own actions," Zoom CEO Eric Yuan said in an email to employees.

6 Inspirational Movies to Get your Entrepreneurial Juices Flowing

Ignite an entrepreneurial fire inside you, especially if you are getting started in your business venture, by watching the movies mentioned in this article.

Actor Says Kiss in Netflix's 'You People' Was CGI Generated. What Does It Mean for the Future of Rom-Coms?

On his "Brilliant Idiots" podcast, "You People" actor Andrew Schulz said the kiss by Jonah Hill and Lauren London was completely fake.