Sharing What You Know Benefits You, Your Team and Your Company

"Those who can, do. Those who can't, teach." So the saying goes, but it's incredibly shortsighted.

Great teachers amplify the work of everyone around them, and that's only the beginning. Don't fall for the tired truism.

Those who can't teach are missing out. Why dismiss yourself as unable to contribute beyond your own abilities? Putting time and care into sharing what you know benefits you, your team, and your company.

Hire people who learn constantly and teach others what they learn.

The impact of great teachers

Ben Horowitz was not impressed by the training experiences he'd had in business, as he confesses in one of his essays. Then one day, while reading Andy Grove'sHigh Output Management, he had his opinion flipped on its head.

Horowitz decided that the gains to be had in education far outweighed the cost in time. The resulting effort was his now well-known "Good Product Manager/Bad Product Manager." As Horowitz tells it:

Most dramatically, when I was Director of Product Management at Netscape, I was feeling frustrated by how little value most product managers added to the business. Based on Andy's guidance, I wrote a short document called Good Product Manager/Bad Product Manager which I used to train the team on my basic expectations… I was shocked by what happened next. The performance of my team instantly improved. Pretty soon, I was managing the highest performing team in the company.

(One addendum: learners are taught, not trained. Teaching is for people, training is for dogs.)

Horowitz says that this was a revelation he would carry from that moment on, into the founding of his own companies.

There was just too much at stake to not invest in teaching: performance from every team member improved (and was easier to evaluate), fewer people stagnated or plateaued, and employee turnover—which was always closely connected to personal growth and the current standing with leadership—dramatically improved.

Every would-be "10x employee" considers herself a voracious learner, ambitious enough to never stay static. But even the greatest of contributors has limits. Where the individual peaks, the team transcends.

Teaching at every level

Knowledge is a rare product, which, once delivered, remains with the supplier.

Better still, it often returns bearing gifts. "Teaching" in many scenarios means conversation, whether asynchronous or in-person. Great conversations don't just communicate ideas, they create them. That makes all of us potential teachers.

If you're like me, you noticed Horowitz's emphasized one word in particular: manager. While "training is the boss's job," the opportunity doesn't end there.

Teaching occurs whenever information and feedback are used to positively influence future outcomes. There's room for everyone to contribute.

Sure, makers have to make. The team depends on them. But where enthusiasm for learning and sharing goes, an environment conducive to great work follows.

I'm reminded of what our own Paul Jun wrote about his first few months at Help Scout. As a new marketer on our publishing team, he recounts the initial struggle to find his voice, until it was overcome with "teaching" from me.

I was genuinely surprised—I never considered our conversations to be anything but conversations, and, if anything, I felt like I was learning as much as I was sharing. But who else would have been suitable for these talks? Not only is "management" a lazy answer, it's an incorrect one.

Management is no limiting factor. Sometimes the best way to learn is from a peer. Those above may have a vantage point on the situation, but the closest camaraderie is built down in the foxhole.

Learning has positive externalities but so does teaching. Everyone should be teaching all the time.

Sharing what you know

With the urge to teach comes the vision to see improvement and potential in everything. But you have to be careful—in this mindset, you can start to offer suggestions without being invited to do so. This can create frustration if it sounds like nothing ever meets your standards.

Most of us recognize this. Perhaps it is this potential negative spin that stops us dead in our tracks: the fear of coming off as lecturing. Nobody wants to do that.

Related: Silence at Work Is Like a Noxious Gas

Communication benefits from ebb-and-flow. When is it most appropriate to share something you've learned? What's the best medium to do so? Each team is different, and this is only something you can learn as you go. It's a process that has some complexity and nuance.

But kicking things off is easier than you might expect. As Horowitz notes with his light bulb moment on teaching, "The whole thing started with a simple decision to train my people, and an even simpler training document." 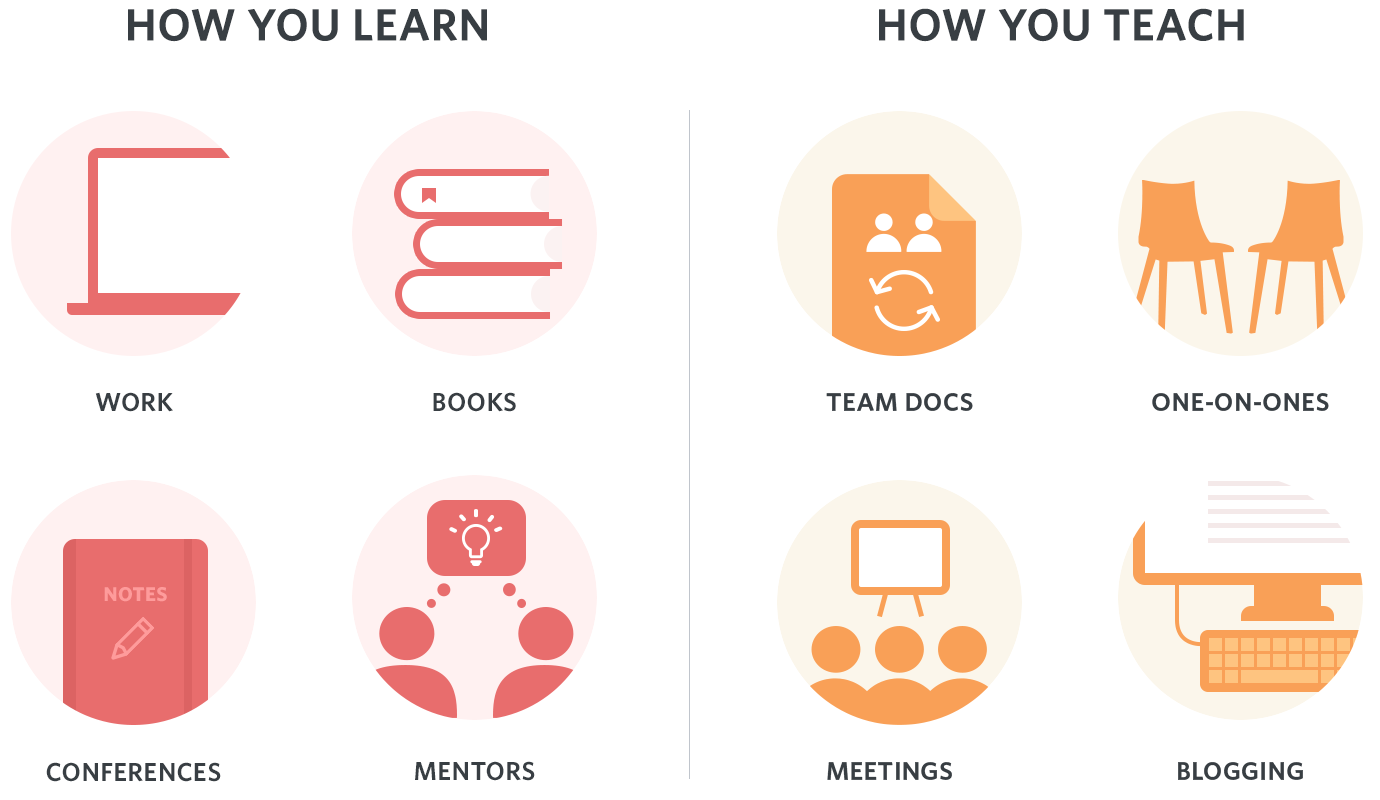 It's about fewer ping-pong perks and more learning stipends. It's caring about not only where your teammates are, but where they could be.

For leadership, it's about recognizing the contributions of teachers within a company. Those who can teach are those who:

I've heard it said that it's hard to consider yourself a success if no one around you could ever be your successor.

Maybe that's true, but I know one thing for certain. The world has given fair warning to those who can't teach—you'd better make way for those who can.