Digital Royalty's Amy Jo Martin left the Phoenix Suns to launch her digital and social-media empire. Here are her tips for how to score more points with customers.

After a former life as the director of digital media and research for the Phoenix Suns, Martin started up her own companyDigital Royalty, a firm that develops social-media campaigns for corporate and entertainment brands along with professional sports teams and athletes like Shaquille O'Neal. Her company also dishes out social-media education programs through Digital Royalty University, which offers to train individuals, small businesses and corporate brands.

We sat down with the social-media maven to chat about her new book, Renegades Write The Rules and hear her tips for breaking industry molds to connect and engage more effectively than ever before. Here is an edited version of that conversation:

Q: Who are these renegades you refer to in your book?
A: Renegades are curious by nature and they don't conform to the way things have always been done. They color outside the lines, but they don't cross the line. They ask forgiveness instead of permission, but they bring their results with them. Within large organizations, renegades are oftentimes disguised as "intrepreneurs," which are internal entrepreneurs. 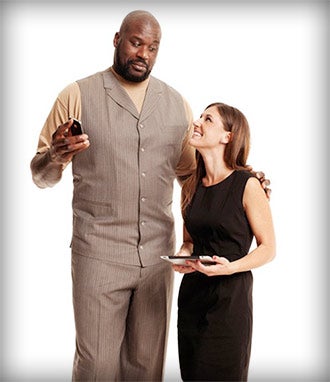 Q: What does it take to be a renegade in business today?
A: It's important to experiment and fail early so by the time everyone else catches up, you're already polishing up your knowledge. But keep in mind that whenever people do things that haven't been done before, adversity and healthy tension shadows them. At Digital Royalty, we call these 'innovation allergies.' Renegades learn to embrace the notion of getting comfortable with being uncomfortable.

Q: What's the most important thing you teach clients about social media?
A: That it's not media. Whoever coined the term 'social media' didn't do us any favors. It's not 'media,' it's simply communication. Think of it more like the telephone than the TV. The goal is to deliver value when, where and how your audience wants to receive it. That means identifying your value by listening to what your audience wants to hear. Social-communication channels are tools which allow us to humanize brands -- whether that's a large corporate brand, a small business or an individual brand. People connect with people, not logos.

Related: Thrillist's Ben Lerer on his Success as a Young Trep

Q: You've worked with some pretty big celebs and brands. What are some examples of how you've helped them build awareness, engagement and increase sales through social media?
A: One of my best examples actually started out as a mistake. President of the Ultimate Fighting Championship and Digital Royalty client Dana White accidentally tweeted out his phone number to his 1.5 million Twitter followers. His followers retweeted his number, and, within minutes, an estimated 9 million people had his number. He called me in a panic, asking if I could undo what he had just done. After I explained that there was nothing I could do, he said, 'Well, if I'm stupid enough to tweet my phone number to everyone, I'm going to take their calls.' For the next 45 minutes, Dana took as many calls as he could. He listened to fans' concerns and answered their questions. As a result, headlines were made, engagement levels spiked and the UFC fan base increased. Dana exposed the human behind the brand, and in doing so, created an authentic community of loyal followers that has made the UFC one of today's most successful sports organizations.

After listening to the response, Digital Royalty took the concept of creating a 'Fan Phone' to Dana. We encouraged fans to call Dana before events by tweeting the Fan Phone number to his millions of fans. Eventually, we were able to secure a marketing partner to sponsor this concept, which made this social-media mistake a revenue generating opportunity. The concept became scalable when we provided all the athletes with fan phones as well.

Also, beware of SOS (shiny object syndrome). It's important to know the difference between a distraction and a real opportunity. Learn to motivate and inspire yourself, everyone else is busy. The business you say no to is just as important as the business you say yes to. Lastly, your hustle factor is often your differentiating factor. Work hard.