By Cadie Thompson
December 12, 2013
This story originally appeared on CNBC 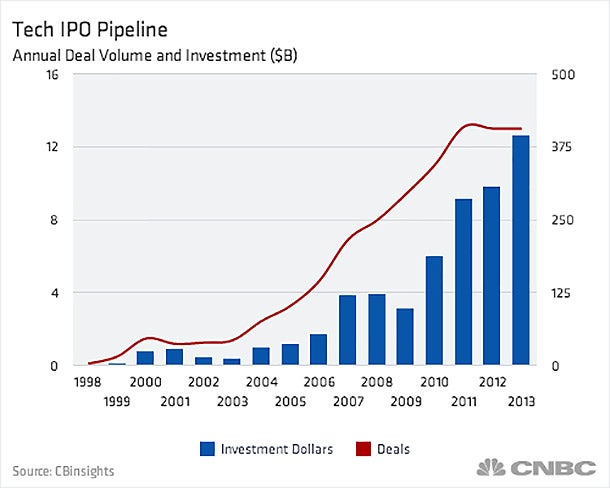 The tech IPO market shows no signs of slowing down in 2014.

In fact, going into the next year there are 590 U.S. tech companies in the IPO pipeline that are either backed by venture capital or private equity and are valued at $100 million or more, according to new data published Thursday by CB Insights, a research firm that collects venture capital and angel investment data.

At this time last year, there were 472 companies in the pipeline.

"2013 was a pretty good year in general for IPOs. It was a little better in health care than tech. But for tech 2014 will be a better year, assuming that the market doesn't suffer some crazy downturn or sentiment doesn't get very negative," said Anand Sanwal, founder and CEO of CB Insights. "2014 will be a good year for IPO and exit more general."

Here's a glimpse of what kind of tech companies are in the pipeline for next year. 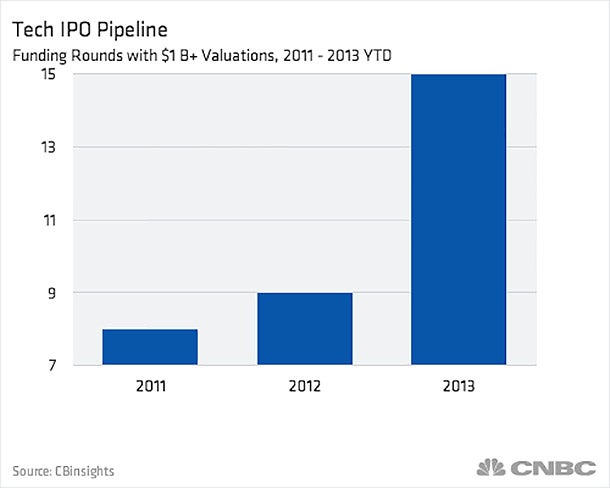 These days it seems to be the new normal for a tech company to be valued in the billions.

Earlier this month Facebook reportedly tried to buy Snapchat for $3 billion. Not to mention, Spotify, Pinterest, and Uber have also made their way into the billion dollar club. And it looks like the trend of funding for these high valued companies will continue.

The number of funding rounds for the tech companies with a valuation of $1 billion jumped 67 percent this year compared to 2012.

There are currently 25 companies in the tech IPO pipeline that are raising or have raised a financing round at a valuation of $1 billion or more, according to the data. To put that in some context, there were only 15 companies like that last year and there have only been 45 VC-backed tech exits greater than $1 billion since 2004.

Given the increase in the number of companies with such high valuations, investors may want to take heed.

"The fact that there are 25 companies valued that high right now in the sector does suggest a bit of frothiness. It does appear to be a little bit overheated," Sanwal said.

However, he added that he wouldn't call it a bubble just yet.

"The public markets haven't acted very crazy. Tech companies that don't do good get pummeled. It's not companies with no fundamental business model that are going to go public," he said. "Only if the public market starts to lose its grip on reality would we have a bubble." 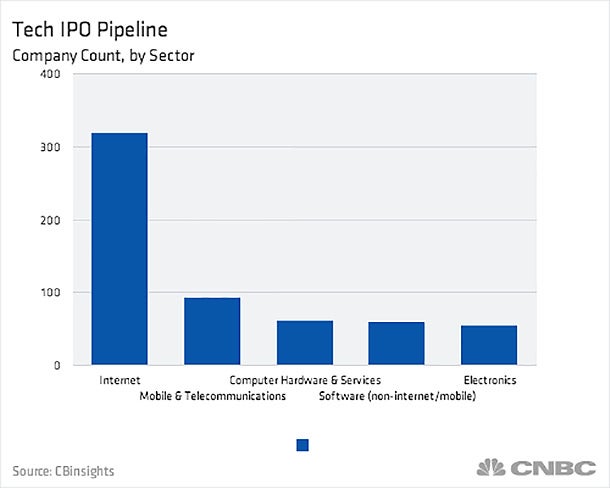 Most tech companies in the IPO pipeline are Internet companies. 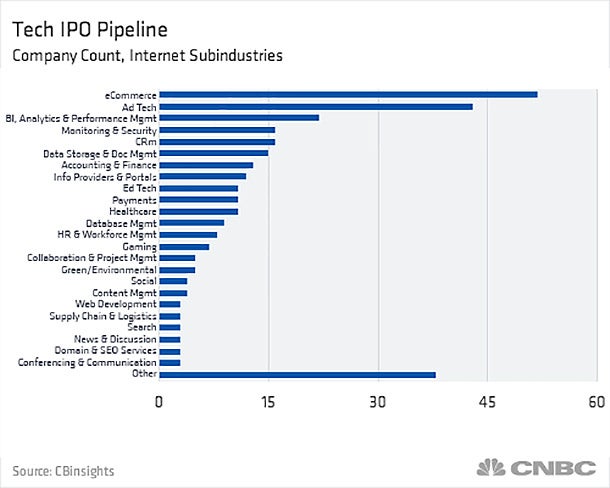 Twitter may have been the sexy tech IPO of 2013. But there's not a lot of social companies in the pipeline for 2014.

In fact, broken down by subsector, there are only four social companies in the Internet sector that are valued at more than $100 million, according to CB Insights' data.

E-commerce companies make up the most of those in the pipeline at 52 percent, followed by ad tech companies at 43 percent.

Not surprisingly, most of the companies—308 to be specific—are located in California. But New York's tech presence is growing. There was a 49 percent spike in the number of tech IPO pipeline companies headquartered in New York than there were last year.