How a chef turned her love of retro fashions into a new career.

By Melinda Fulmer
January 24, 2011
Opinions expressed by Entrepreneur contributors are their own. 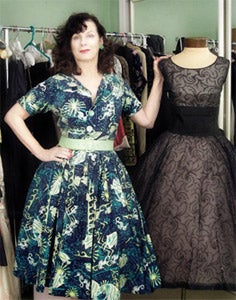 When Theresa Campbell McKee was working as a personal chef, both on Martha's Vineyard and on private yachts sailing around the Caribbean, she told herself that someday she'd settle down and open a little vintage shop with the clothing she had collected from her travels.

After her mother passed away, McKee, then in her 40s, decided she couldn't wait for "someday" anymore. In 2002 she started her business the easiest way she knew how -- with one rack of clothes and an eBay store. Today, she sells thousands of vintage dresses a year through her web store, Blue Velvet Vintage.

By selling on the web rather than setting up a brick-and-mortar shop, McKee and other vintage vendors can keep costs down and find customers as far away as Russia, Finland, Australia and Cypress. In turn, vintage lovers can find that perfect '50s frock without driving all over town rifling through dusty thrift store racks.

Interest in vintage clothing has swelled in recent years along with the popularity of shows such as AMC's Mad Men and HBO's 1920s-era Boardwalk Empire.

According to eBay UK data published on the Queen of Vintage blog in August, sales of full skirts were up 252 percent, year-over-year. Sales of '50s-style kitten heels jumped 140 percent, while sales of sling-backs soared by a staggering 600 percent.

"I think Mad Men brought a new level of consciousness to how spectacular clothing of that period -- the late '50s and early '60s -- really was," says Ashley Kane, a vintage clothing blogger for About.com. And in many cases, she says, the workmanship is better than you'd find today.

Of course, not everybody can fit into wasp-waisted vintage dresses. So McKee began expanding her site several years ago, adding vintage reproduction clothing for those who don't have a 24-inch waist (or just don't like the idea of pre-worn clothing). She also started her own line of '50s- and '60s-inspired halter dresses that she sells on her site.

Her customers come to her, she says, because they're looking for something one-of-a-kind, something that will make them the "center of attention."

"A lot of people just want that unique look," McKee says. "They tell me they don't like a lot of the styles they find in the malls."

Getting Started
McKee says that part of the reason she has succeeded is that she launched her business slowly -- a rack at a time on eBay -- before setting up shop at an online antique mall and then gradually migrating to her own site with the help of a web designer.

There was a learning curve: McKee met with vintage dealers and trolled estate sales by day and read books on search engine optimization by night. She also started blogging about her finds and advertising on other blogs to bring more traffic to her site.

Sales have grown every year since she started the business, prompting a move to a new warehouse in Stuart, Fla., and the hiring of two part-time workers to update her website and ship orders.

Her biggest challenge now is finding enough time in the day to do the things she wants to do to expand her business. She talks about adding more hats, jewelry and gloves to make her site a one-stop shop and expanding her own dress line.

"It's getting harder and harder to find relatively nice vintage things at decent prices," she says. "So much of it goes overseas."

The Price of Popularity
Indeed, she says, she has a lot more competition these days for those 1950s Hawaiian sundresses and 1940s satin evening jackets: everyone from huge warehouse operations to Etsy's small army of vintage resellers. She doesn't have time anymore to troll thrift shops or travel the country extensively searching out vintage stock, so she often has to pay a bit more for her pieces from dealers or estate sales.

And these finds are not without risk. Sometimes a 60-year-old dress she has paid $100 for will simply fall apart or fade when it's dry-cleaned.

That's why more of her sales have shifted to higher-margin reproductions. Still, she says, she loves the treasure hunt of finding good-quality authentic vintage clothing. It's a rare thrill, she says, when she can find something like an Emilio Pucci dress hidden away in an old dusty closet.

You Gotta Love It
McKee says the main reason she does what she does is because of her fascination with the clothes and their history. She loves styling people in vintage clothes, wearing them herself, and talking about fashion on her blog. Her South Florida home is decorated in mid-century style, and she loves to wear her prize finds to swing dance parties on weekends.

"It makes me happy to have a job where I can talk with people who like to dress like me."

She says her customers run the gamut from teens looking for rockabilly-style prom dresses to women of her age and beyond looking for styles that are ladylike, but not frumpy or matronly.

She'd better love it, McKee says. Though her site brings in enough for her to live comfortably, she says she won't get rich from it.

"I work about 70 or 80 hours a week," she says. "I wouldn't work this many hours for someone else for the money I make now. It's really a labor of love."

Here are a few of McKee's favorite vintage sites:

How One Woman's Amazon Side Hustle Passively Makes $15,000 Each Month