I Quit Teaching After 20 Years to Open an Ice-Pop Franchise. I Make $150,000 More a Year and Work Fewer Hours.

Sonya Matthews was an elementary-school teacher for 20 years before she joined an ice-pop company.

This as-told-to essay is based on a conversation with Sonya Matthews, a 50-year-old franchisee of a gourmet ice-pop company in Newnan, Georgia. Insider verified the revenue figures mentioned with documentation. It has been edited for length and clarity.

I'd wanted to be a teacher since I was young, but in 2018, after 20 years of teaching elementary school, I admitted that my passion had died, and I started thinking about what I could do next.

My husband runs his own haulage business, and I liked the idea of being my own boss. At first, I thought about opening a tanning shop because I noticed that tanning beds were being used year-round at the gym. When I shared my plans with a friend, she told me about a gourmet ice-pop shop in Le Grange, the town right next to mine, and said it was so good I should open a location in our town. 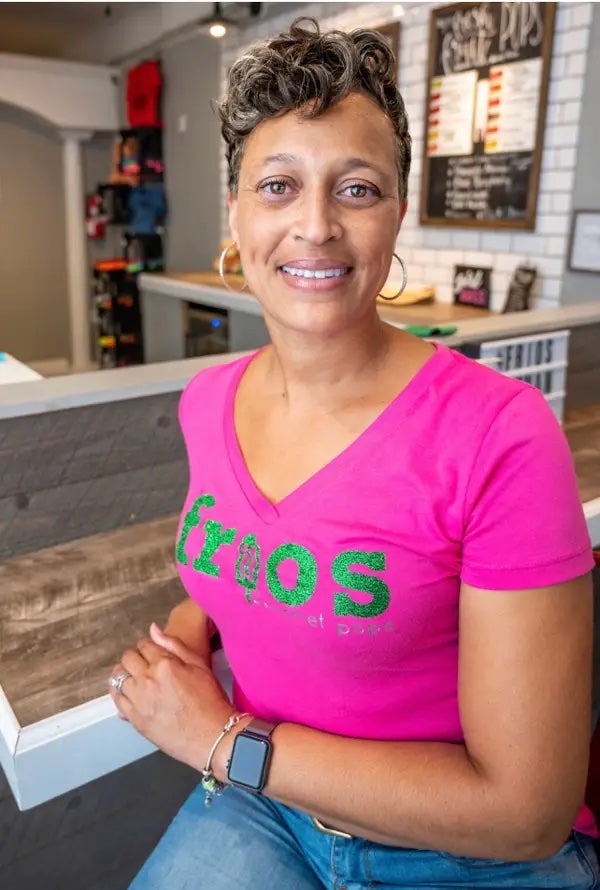 At the end of that summer, I took a trip to the Frios gourmet ice-pop store she told me about. From the moment I tasted the pops, I was sold. I tried them on a Friday, and on Monday I called the owner and asked how I could buy my own franchise.

Since then, I've sold Frios ice pops for birthday parties, corporate events, and tailgates; I've opened brick-and-mortar stores; and I now make $150,000 more a year than I did as a teacher. 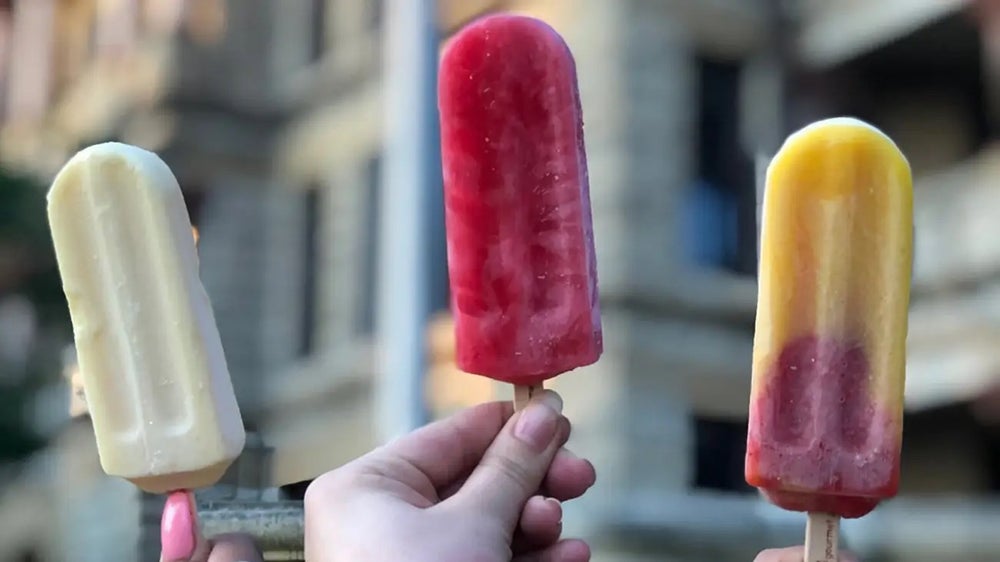 A territory is equivalent to a town, and when you own a territory you have the rights to be the only seller in that area. I also bought a refrigerated cart and 1,000 ice pops that I stored in a new freezer I bought for my home.

When I was getting started, Frios didn't offer any training, but the franchise owner in Le Grange was generous with his time, and I also took tips from Google — I searched "How to be a successful business" and found a blog that said you should pound the pavement and stay in customers' faces with whatever you're selling, so that's what my family did.

By November 2018, a few months after buying my first territory, I had my refrigerated pop cart on order and a Christmas festival booked at The Depot, a former train station turned event space, in Hogansville, which is 20 miles away. My cart hadn't arrived in time for the festival, so I covered a picnic table in a cloth I'd printed with the Frios logo, wrote the ice-pop menu on a chalkboard, and stored the ice pops under the table in a cooler. We sold more than 150 pops at $4 each in one day.

A lifestyle store then gave us permission to park our cart outside its store each weekend.

We attracted customers on social media and in person

My children told me that I needed to be on Instagram and Facebook, so I started posting where we were going to be and sharing pictures of limited-edition flavors. Our most liked posts were shots of our customers or posts about seasonable pops.

At our second event, in December 2018, I met a lady who told me she was getting married the following year, and she loved our gourmet pops, so I offered to provide pops at her wedding. I ordered a bespoke refrigerated cart just for weddings that we decorated in white and draped with ivy. We now book so many weddings that we're listed as a preferred vendor at the Murphy Lane wedding venue. The price that people pay for the cart depends on how many hours they want us to stay and how many pops they want each cart to contain.

Our sales were so strong by January 2019 that I told my husband I wanted a storefront.

I took out a loan, and a month later, I'd secured my first brick-and-mortar store 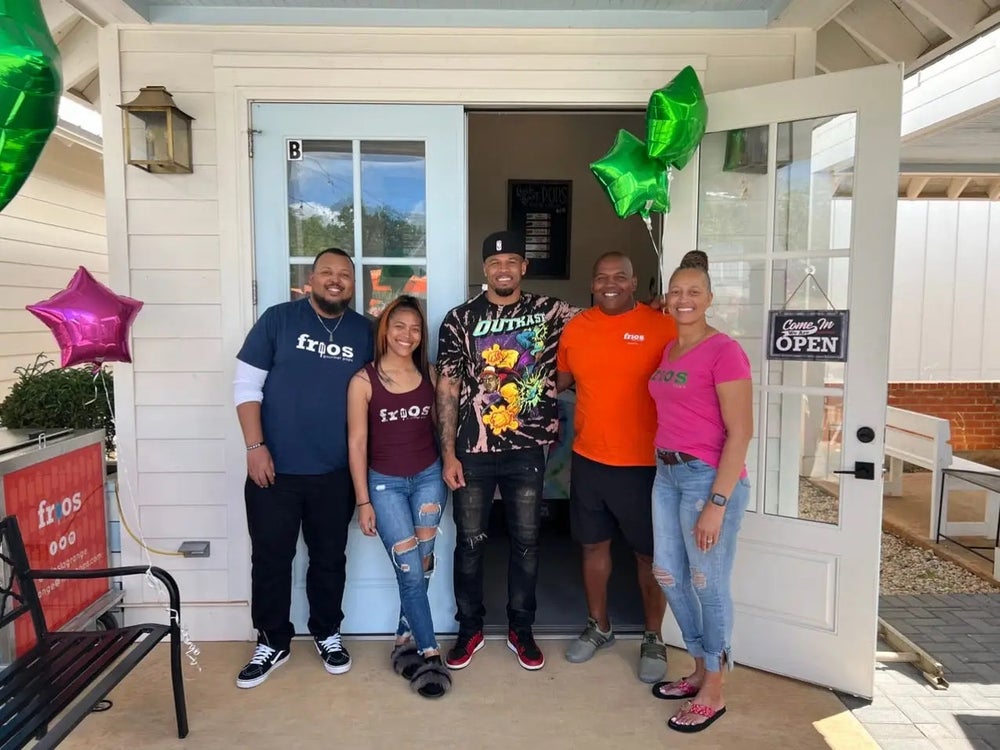 Matthews with her family outside the store. Courtesy of Sonya Matthews

I retired from teaching in May 2019 to start selling pops full time. We planned to open in May, but the opening was delayed by two weeks because the "Lovecraft Country" film crew contacted me and asked to rent my empty store and use it as a set for the HBO show. Not only did the crew pay me to use the store, but it let us set up a cart outside the store and sell our gourmet ice pops to the crew and cast members. When "The Walking Dead" was filming in Newnan, its crew also stopped by.

We opened officially on June 18, 2019, with five staff members, including my daughter, my sister, and two of my former students. We were open for 16 days in June, with gross sales totaling more than $15,000.

I continued to buy the rights to sell in different territories

I also bought the Le Grange territory where I tried my first Frios pop. I bought that territory in November 2020 during the coronavirus pandemic, so I chose not to buy the brick-and-mortar store and just supply gourmet food stores or events with pops in that region.

While our ice-pop store in Newnan was able to stay open during the pandemic, I wanted to do more to help make a few people smile during this tough time, so we decided to take our ice-pop cart with its brightly colored umbrella to neighborhoods. We would share our schedule on Instagram and then invite customers to preorder their pops, which we would box up for them. In one hour, we'd sell $400 worth of pops in each neighborhood, and we'd would visit up to four neighborhoods a day.

Our events have become as important as the stores

My daughter and sister manage the stores, and I now oversee events. I learned early on that I needed to delegate when I realized I was spending more time than I wanted doing tasks that someone else could help me with. I now work fewer hours than when I was a teacher. My workday used to start at 7:20 a.m., but now I may not start work until 9 a.m.

I've also worked hard to build relationships with universities and corporations, often by starting with a cold email. A few months ago, we delivered 966 pops to the Delta ground staff at Hartsfield-Jackson Atlanta International Airport and 1,000 pops to Auburn University.

I opened my second Frios store on May 7, 2022, in Auburn, Alabama, which my sister now runs. My son, Tray, who is a professional athlete, came home to support us and became our celebrity cashier. My eldest son, a cost analyst, drives our food truck to events when I'm unable to do it. It's definitely a family business.