Young Entrepreneurs Weigh in on the 2012 Presidential Election

It's often hard to pigeonhole a generation of business owners, but as a voting block they do seem to come together -- at least on one issue.

Being young in America seems to be getting tougher by the day.

In addition to hitting record-high levels of student-loan debt, young people today face a dearth of employment options. According to a May study from Rutgers University, just 50 percent of those graduating from college between 2006 and 2011 are employed at a full-time job.

And though the overall unemployment rate stood at 12 percent among 18- to 29-year-olds in October — more than four points above the national average — that number ticks higher for those who don't have a college education. According to the Bureau of Labor Statistics, the unemployment rate among those who didn't graduate from college is more than twice that of their college-educated peers.

Yet even those in better shape, who've turned to making their own jobs when none existed — a.k.a., young entrepreneurs — aren't much more optimistic. And ask them about the economy and whether either candidate running for president can do anything to make it better, their attitudes can often take a grim or apathetic tone. 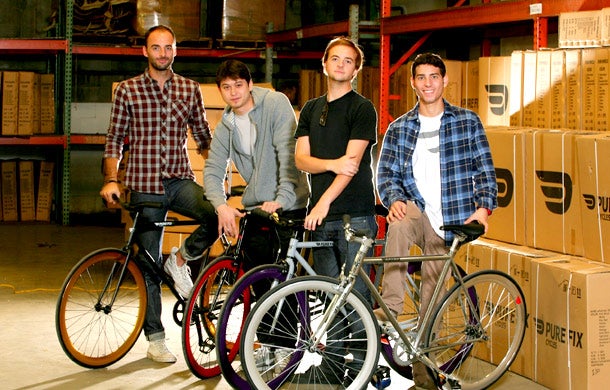 The Pure Fix team in their Los Angeles home base. Jordan Schau, second from the right, thinks his business will need to change no matter who wins the election.

Jordan Schau, the 24-year-old co-founder of Pure Fix Cycles, a web-based bike shop in Los Angeles, offers a common refrain among young entrepreneurs. "We fall in to a few hotly debated categories. Startup? Check. Small business? Check. Manufacturing? Check. Leveraging China's manufacturing prices? Check." No matter who wins the presidency, he adds, "our business will surely have to make some changes with the coming presidential term, as both candidates have said they will change American policy for each of the mentioned issues."

You could call it disappointment in the job Barack Obama has done as president — especially after he swept into office in 2008, thanks in large part to the support provided by young people. As William Galston, a former policy advisor to President Clinton and a scholar at the nonpartisan Brookings Institution, puts it: "Disappointed. That's the median Millennial response to the past four years. And that's making it very difficult for young adults to feel as passionate about politics as they did then."

Neil Howe, a Great Falls, Va.-based historian specializing in generational political trends, thinks it's a little more complicated than that — at least as far as young entrepreneurs are concerned. "Millennial Entrepreneurs are kind of in a very bizarre situation," says Howe, referring to the generation of Americans born in the 1980s and 1990s. "On social issues, they trend liberal. But as business people, they tend to see things from another perspective. For instance, they're likely to be more conservative when it comes to fiscal issues and taxes."

Just ask Syed Balkhi, the 22-year-old owner of Awesome Motive, an apps maker in West Palm Beach, Fla., who disagrees with President Obama's tax plan. "I would be expected to pay higher taxes on capital gains and income as well. Higher taxes equals less profits for me. Normally I invest my profits in hiring more folks or starting new ventures," he says. "This will definitely hinder that."

Related: What the 2012 Presidential Election Can Teach Startups About Finding a Niche

Anisha Sekar, also 22, may be a self-described "strong liberal," but the vice president credit and debit products at the San Francisco-based website NerdWallet does fear the status quo. "A credit squeeze brought on by economic contraction from [the automatic spending cuts due to kick in at the end of the year], or increased interest rates demanded by those who distrust the U.S.'s ability to repay, would directly and meaningfully hurt our business."

So the heart of the matter isn't politics at all, it's business, says Howe. Entrepreneurs old and young are concerned about how the economy and how the decisions made under this president or a different one could impact their business. So which way will young entrepreneurs vote?

To be sure, factors such as age, education level, yearly income and geographic location have significant bearing on the proclivities of Millennial entrepreneurs. Furthermore, Howe points out that social entrepreneurs are typically more liberal than others. But even taking these factors into account, young entrepreneurs are impossible to pigeonhole.

This is not to say they don't comprise a unique subset of the electorate. For example, Howe notes that "On average, Millennials trust national institutions more than boomers or [generation] Xers did. They're generally more optimistic that these institutions can function well."

Although many of the young entrepreneurs we spoke to were more skeptical about the role of government in society, some did suggest that business could overcome these obstacles. They touted the capacity of good business ideas, which could transcend political and economic realities. This sense of optimism stands in stark contrast to the bleak outlook of many un- or underemployed Millennials with college degrees.

So while the young entrepreneur vote could go either way, the youth vote, overall, would seem to favor some level of change — no matter what happens on Election Day.

How do you think young entrepreneurs will vote today? Leave a comment and let us know.