Ask (In Arabic) And Ye Shall Receive: Jawabkom's Raed Malhas Has All Of The Answers

By Kareem Chehayeb
September 15, 2015
Opinions expressed by Entrepreneur contributors are their own.
You're reading Entrepreneur Middle East, an international franchise of Entrepreneur Media.

This article originally appeared in the July 2014 print edition of Entrepreneur Middle East.

Jawabkom sounds like an Arabic Ask.com, but Jordanian "trep Raed Malhas has developed an online service with greater depth- and it's filling the market need in the MENA region for a majorly underrepresented online demographic. Malhas, who says that his "passion is to build products that can positively affect tens of millions of lives," noticed that Arabic speakers don't have a website that provides a platform for them to speak with experts in different fields online if they have a particular question. "When studying the Arab market, we found that there isn't a Q&A site like Quora or JustAnswer so, we saw an opportunity and built Jawabkom." Jawabkom has experts from different fields, including law, medicine, information technology, and nutrition, all targeting the Middle East's 400 million strong Arabic-centric population. Malhas is a Purdue University alumnus with a degree in Computer Science, and comes from a family of "treps. His dad co-founded an Arabic computer company called Sakher. His entrepreneurial idol? Paul Thelen, founder of Seattle-based Big Fish Games.

So what's setting up an online service with a variety of experts like? Malhas worked at light speed- after quickly setting up a quick trial website in 2013, Malhas and co. tested it in a few countries and subsequently formed Jawabkom "within weeks". They hired 14 employees through another venture of Malhas' R&D Labs, and then connected with Arabic-speaking experts in a variety of different fields. It seems like a majorly capital-intensive project, especially with the experts who are taking in questions on a daily basis. That said, Jawabkom certainly have money in the bank: "R&D Labs funded the first couple of months of development, operational, and marketing costs," said Malhas, who later garnered US$250,000 through angel investors MENA Ventures. ROI? "Taking out the operational cost, our ROI is: 210%. That means, for every $1 we spend, we make $2.1 back on average."

Despite having the capital, when talking about keeping Jawabkom running smoothly, it seems that Malhas and co. have a lot on their plate. A lot of it has to do with the straightforward fact that they're catering to the Arabic-speaking audience of 22 different countries. Raed Malhas said that "without truly understanding our users in each and every Arabic country, our product won't be "sticky' or "relevant', and it won't grow. While we continue to grow rapidly, it is crucial for our team to continue to closely study the behavior, and needs, of users in each country, so we can tailor our product." I guess it's no surprise that most of their operating costs are allocated to marketing and product development. And what successful marketing strategy was used to gain so much traction? Facebook and good old SEO.

Malhas currently has 60 experts for Jawabkom, and they're compensated to answer all questions that the wesbite's users ask through their paid services. That said, he has adopted something that slightly resembles a Freemium model. Aware of the staggering differences in economic conditions, specifically GDP per capita, Jawabkom also works with volunteer experts. "For users who have less access to payment methods or are in low income areas, we decided to look into providing those users with potentially free answers delivered by volunteer experts, when these users invite friends from Facebook," explains Malhas. It's clear that Jawabkom does all they can to make sure they are able to provide the answers, but are Arabs in the Middle East asking questions? Since Jawabkom launched in January 2014, Malhas claimed that they have grown "exponentially. We started getting hundreds of questions posted a day almost immediately and now we're getting over 3,500 per day." Want to learn more about their user-base? When it comes to gender, it's almost at an even split, with males making up 50.9% of Jawabkom's users. 42% of Jawabkom's users are under 25 years-old," said Malhas, referring to an UN report that concludes that approximately 50% of the region's population is below the age of 25. And finally, regarding geography, it appears that most of Jawabkom's users are active in Egypt and Saudi Arabia, but there is an evident presence in Jordan, Morocco, Kuwait, Iraq, and the UAE.

When asked about the most popular question categories, we were told that there are three exceptionally popular ones at the moment: "Legal, medical, and dream interpretation." It doesn't stop there though; the folks at Jawabkom are really keeping tabs on their demographics. Malhas was very eager to share some interesting information that he believes says speaks volumes about the region, including the fact that 32.3% of people who asked legal questions are under the age of 25, 48% of them being women. His take? "My guess is that the Arab Spring has had a hand in the interest in law." What really stood out for us was dream interpretation; it sounds like some whacky psychology experiment, but it really has to do with theological interpretations of people's dreams. The experts for that category have backgrounds in religion and theology, and we are told it was an instant hit across the Arab world. Malhas says that after a mere two months, dream interpretation has "become one of the most popular topics and has already had 60,000-plus questions posted." Jawabkom's team studied the different kind of questions asked for that category from the different nationalities and yielded some interesting results. While Palestinians tend to dream about land, Syrians dream primarily about death and the military, and Libyans tend to dream about Syria… We'll leave that last one for you to interpret. 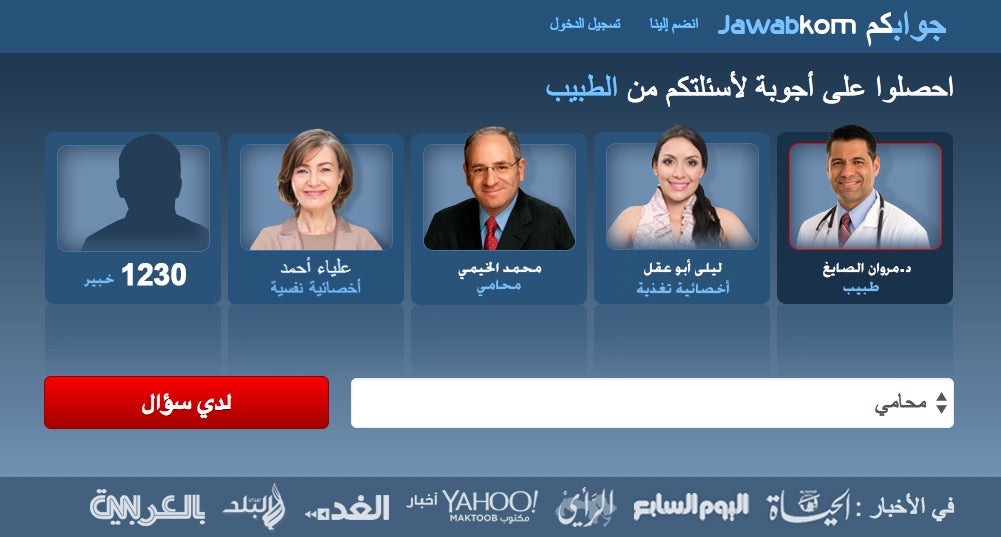 Jawabkom looks like they're going to sign off their debut year on a good note, but what's next? You can expect mobile and iPad apps to be available by "mid-summer" of this year. Malhas made this decision based on consumer behavior, adding that they "actually studied the traffic coming to Jawabkom.com per device, and found that mobile phones accounted for the majority of our traffic in several countries." Until then, you can log onto the website from your smartphones and have a more mobile-friendly experience on their mobile site. The big plans though are rapid growth, revenue… and then even more rapid growth and revenue. Malhas further elaborated on his big development schema: "We're averaging around 3,500 questions posted a day with our target being to cross 10,000 questions per day by mid-summer; then double it again by fall."

Before signing off, we couldn't help but ask about his end goal with Jawabkom. "I'd like Jawabkom to become the Quora of the Arab world, with a tiny difference: I'd like it to generate real revenue." There you have it, while many startups often struggle with the big question of how exactly to monetize on their ingenuity, it seems that this founder has already found the answer.