By Pamella de Leon
December 28, 2015
Opinions expressed by Entrepreneur contributors are their own.
You're reading Entrepreneur Middle East, an international franchise of Entrepreneur Media.

Instead of going for the usual funding routes taken by startups in the Middle East region, Artscoops chose another option to grow its business: crowdinvesting. The MENA art platform specializing in buying and selling art from MENA artists and commercial galleries has raised funds through equity crowdfunding platform Eureeca. Commenting on the raise, co-founder Raya Mamarbachi says, "We raised US$130,000, although we have yet to receive anything as we are still in the process of finalizing the share holder agreement and issuing the shares (I think this will be in January), but after Eureeca's fees are given, I think it will be around $105-110,000."

Mamarbachi decided to opt for the equity crowdfunding route than traditional means of raising capital after reasoning that it might be easier to gain seed money from various smaller investors, instead of targeting just one or two high-net-worth individuals, or an institution. Among the factors that influenced her choice were the benefit of Artscoops getting validated by the "crowd," as well as the ability to include her family and friends who wished to "participate in [their business] journey." The process also allowed Mamarbachi to learn how to evaluate a business, presenting it in a one-minute pitch, defending its financial projections, and pitching in front of total strangers, while being ready to answer potential questions on the site's live Q&A feature. 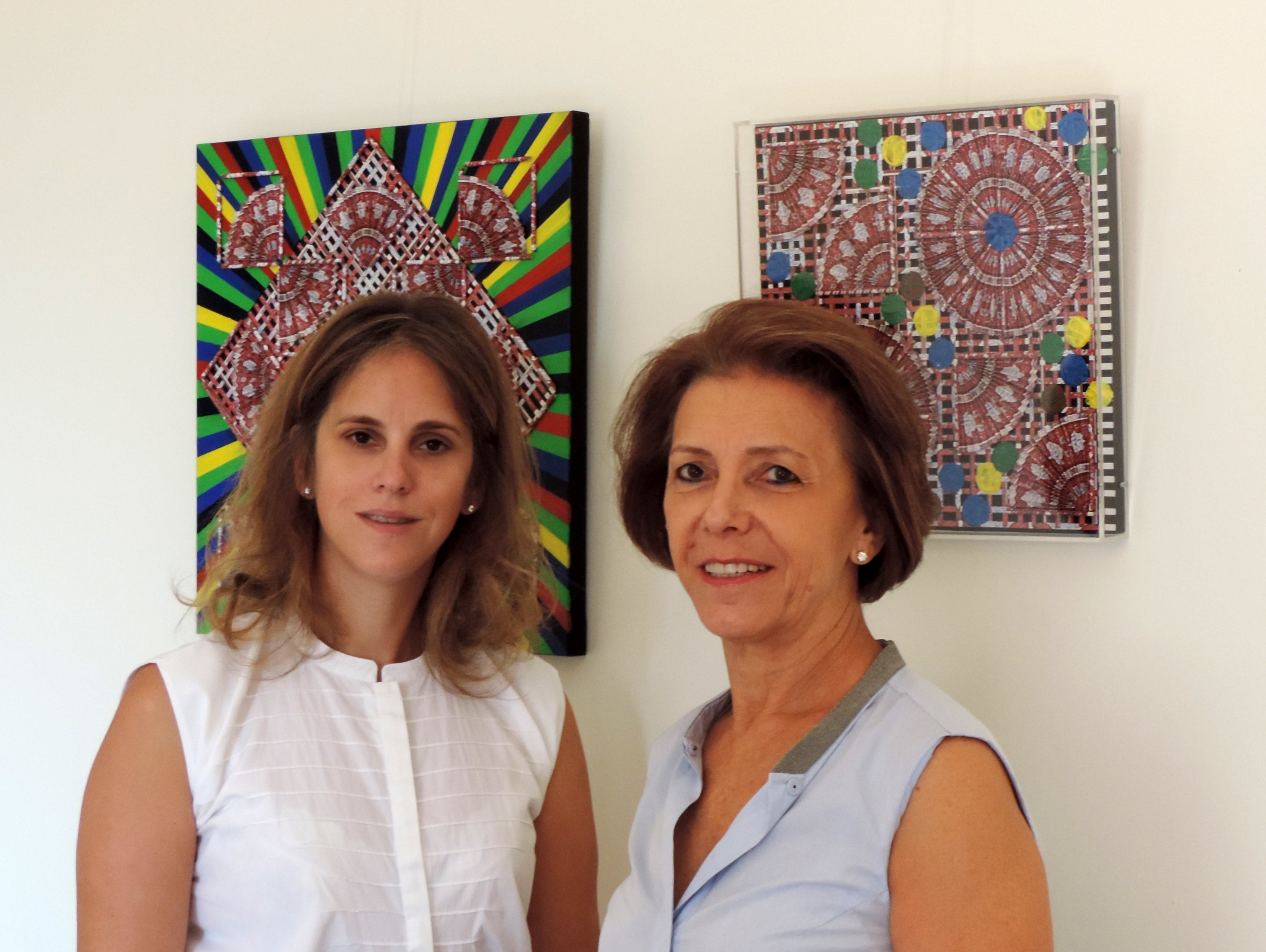 The process began with Mamarbachi submitting her business plan with a five year projection to an investment committee, which determines the proposal's eligibility to be on the website or not, checking "if it is viable, an interesting business or already has proof of concept." In this stage, Mamarbachi recalls an account manager was available "doing what's called an "onboarding' consultancy with us." It took approximately one month to prepare requirements such as its executive summary, business plan and creating offshore company, followed by a three-month planning for the launch. The Eureeca team trained them on questions that may arise from prospective investors, with the Artscoops team then given the opportunity to pitch to a room full of potential financial backers in Dubai.

Mamarbachi has planned the funds to be divided into two broad areas: 75% of it will go into operations and IT development, and 25% in marketing and advertising. On Artscoops' agenda is creating an online auction feature, a mobile application, a design platform, and a responsive website, alongside goals to hold a live auction in Beirut and further work in marketing, SEO and gallery expansion in the GCC.

Tips for MENA startups when pitching from an equity crowdfunding platform

1. Be realistic. "Set a realistic goal if you don't reach 100% proceeds. It's better to raise smaller amounts and use it wisely. Then, in the following year, raise more, [instead of] trying to raise too much at once. It sets a standard."

2. Have a viable business model. "It's better to already have proven sales or concept [than] just an idea on paper, as it's an "easier sell,' even better [if the startup] is [already] at growth stage."

3. Be willing to ask and accept help. "Seek the advice of the [platform's] investment committee on one's evaluation, as they have more knowledge of the startup world." 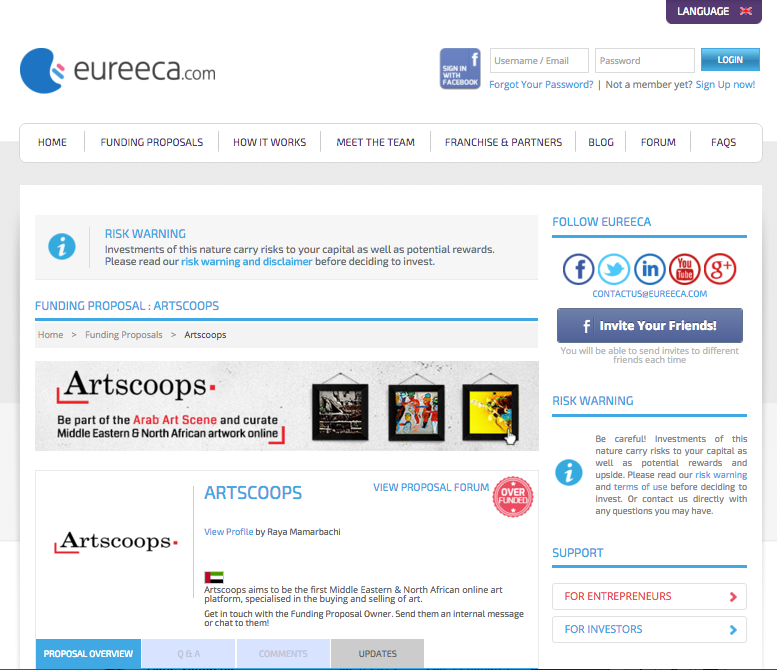 Equity crowdinvesting: what you need to know

According to Eureeca co-founder and Managing Director Sam Quawasmi, Artscoops' campaign on the equity crowdfunding platform saw a total of 49 investors from its network (incidentally, it's a Eureeca record) contributing to funding the enterprise, which specializes in buying and selling art from MENA artists and commercial galleries. Being a scalable business in the emerging art market of the MENA region made Artscoops an attractive enterprise on Eureeca, given the potential for it to be acquired by a larger online marketplace in the future. For startups hoping to replicate Artscoop's success on Eureeca, here are a few of Quawasmi's pointers on what to keep in mind when considering equity crowdinvesting as a funding option:

1. Equity crowdinvesting requires effort- a lot of it. "Entrepreneurs who think they can launch a campaign, and then check back in in a few weeks to find that they have $300,000 in the bank, are mistaken. A lot of effort is required in the preparation of the proposal and engaging with investors during the campaign. If raising money offline is a full-time job, equity crowdfunding makes it a part-time job."

2. Does your startup make the cut? According to Quawasmi, only businesses with two to three years' of operation and ideally generating revenue should consider crowdinvesting as a funding option. For a business to succeed on a platform like Eureeca, it needs to be scalable and also have a feasible future exit opportunity to attract potential investors.

3. Beware of overvaluation. "Another pitfall is for businesses to overvalue themselves. It is natural for entrepreneurs to seek the highest valuation possible, but they must be wary of overdoing it. Over-valued businesses won't get funded and entrepreneurs need to ask themselves if they are willing to greatly delay the capitalization process over their valuation."

4. Use your network effectively. "Generating early momentum in a campaign is important for it to be successful, and the best way for entrepreneurs to do this is to tap into their personal networks for investment. People who know you and your business are most likely to invest first. Once they do so, and thereby validate your proposal, the crowd will have more confidence to follow suit and invest. To not tap into your networks is risky. Eureeca works with all businesses on the platform to build out their contact lists. You know a lot more people than you think!"

5. The investors' advantage. For investors hesitant on the ROI of equity crowdinvesting as compared to traditional channels, Quawasmi points out that SME private equity, the asset class offered on Eureeca, has the potential to generate large returns for investors when liquidity occurs. "We are talking about 10, 20, 50, even 100x multiples," he says, adding that equity crowdfunding has made the asset class more accessible and not just limited to angel investors. "Now pretty much anyone can tap into the asset class and invest in deals that can potentially yield this kind of returns."