By Pamella de Leon
May 9, 2016
Opinions expressed by Entrepreneur contributors are their own.
You're reading Entrepreneur Middle East, an international franchise of Entrepreneur Media.

"We want to use technology to reduce the world's energy consumption by 20%." That's how Taka Solutions founder and Managing Director Charles Blaschke began his pitch at the regional round of The Venture, a global competition staged by Chivas seeking social enterprises for a chance to win a share of a US$1 million fund. The startup ended up winning the GCC round, and it will now represent the region at The Venture final round in July in New York.

But being an entrepreneur wasn't something that Blaschke initially set out to do- it wasn't until 2010 when he was working at a tech consulting firm in Abu Dhabi that while "doing some calculations, like analyzing some energy saving on some buildings, I called Chris [Burkhardt] in and I was like, "Look at these savings we could get from buildings!'"

Burkhardt -who was Blaschke's roommate and now co-founder and Commercial Director- used his background in finance, investments and economics, while Blaschke used his engineering and tech background to build Taka Solutions: "We realized there's a serious opportunity to save energy in buildings, and happen to save a lot of money as well- so it may be a viable business model."

Established in 2013 and officially launched in 2015, Blaschke and Burkhardt are joined by founding team members Philip Scholoss and Henry Jeha- whose experiences ranged from business to energy and technology.

A small seed fund from family and friends in the U.S. helped cover the initial costs of launching at approximately AED100,000. Blaschke emphasizes that the business is taking a lean approach: "We didn't take salaries for the longest time; we still don't really take much salary."

As difficult as it was, he attributes their "relentless" work ethic to the startup's current state of stream of projects and clients: "I think the biggest reason we are where we are today, is because of [the] commitment, ambition and hard work of the people of the company."

Initially, they planned to get a fresh capital injection every year, but within seven months, the enterprise became profitable. Although there's been interest from other parties before, at the time of writing, Taka is in the final stages of finalizing an investment with a partner.

On its business operations, Taka Solutions has three basic steps: analyze, implement and manage, with an additional revenue stream from consulting. This entails utilizing technology, "building information modelling (BIM) and energy modelling" to optimize a building's energy efficiency by installing IoT sensors to be connected for cloud-based analytics.

Engineers can analyze, monitor and predict a building's real-time energy and display in a user-friendly dashboard or app during its contract. It's on a paid-from-savings business model, meaning "[the customer] only pays, if we save [energy and cost]." Contract periods are between three to seven years, "so, we'll go in, and we'll sign a five-year contract, and we'll split the savings 50/50 with the owners."

Blaschke says that on average, Taka reduces energy consumption between 20-40%, but what had also stirred The Venture GCC judges' interests was its free app- which allows users see how to lessen energy consumption at home with an element of gamification. As a B2B energy solutions startup, it's a B2C approach "closing the gap between consumers, buildings, Taka and the environment." The startup is even in discussions with regional utility companies for an app testing phase.

For up and coming "treps, Blaschke advises that careful consideration is needed before launching a business: "Before you jump in, really take a step back and ask yourself, "Are you ready to sacrifice everything you know in your life for this?' And not just for a week, a month or a year, I mean, really for one to three years, if you had to give up everything that you know in being normal, and go through a lot of pain -mental, physical, emotional, health, relationships- would you do it? And is it worth it?"

While he doesn't mean to sound discouraging, the founder says, "I think they need to understand that this isn't a walk in a park, especially if you're doing something that people don't understand." He speaks from experience, as Blaschke has been on the receiving end of being talked down on as a startup that's not just an app or in e-commerce.

On that point, he says that if your idea really does solve a problem and adds value, then don't give up, and encourages to take the support and resources of initiatives for the ecosystem such as TURN8, Impact Hub and in5, which Blaschke now wishes they had taken more advantage of.

Moreover, he says, "Don't be so proud to give up some of your company. Don't think your valuation is $1 billion because Facebook had, or "I've been working on this thing for three months, taking half of my salary, so it's worth it'- it's probably not. Don't be afraid to give away 30% of your company, if there's somebody who can help you and has the money, and can enable to grow your business. Take the damn money; take it early, seriously."

Public voting, which will help determine who receives funding from The Venture, begins on May 9, 2016. To vote, click here.

THE VENTURE JUDGES TALK BACK: WHY DID YOU VOTE FOR TAKA SOLUTIONS? 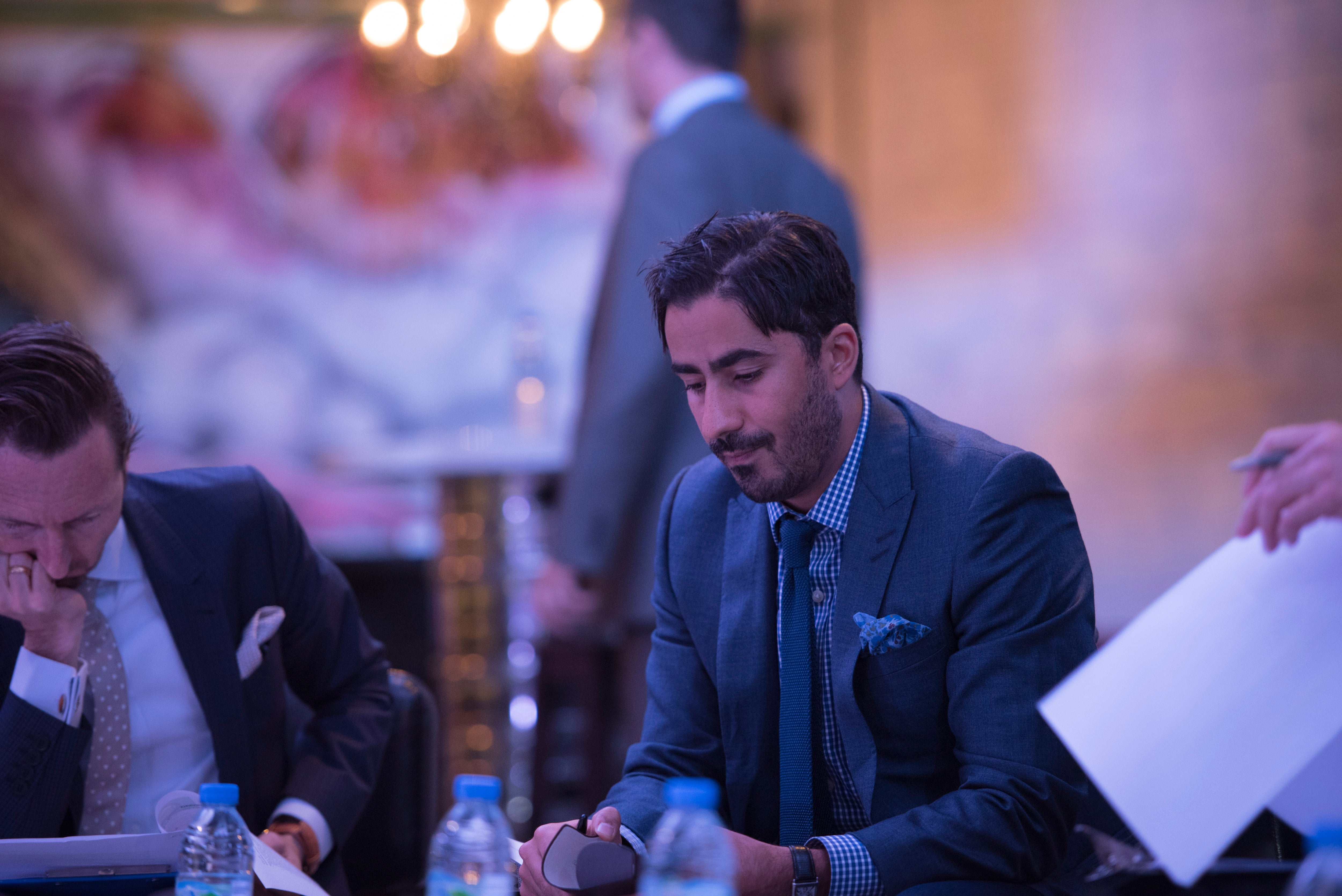 "The Taka Solutions founders were charming, poised and extremely knowledgeable about their industry. They've built a solid b2b business that analyses and saves energy for large buildings and earns money on a performance-based revenue model aligning risk and reward between them, the customer, and the planet. What convinced me that they deserved a chance at the global finals was their inclination to evolve towards a B2C product. The free app they plan to build -if successfully adopted- can help everyday individuals understand their daily energy use at home and help mitigate unnecessary loss, which can scale quite exponential and create massive energy savings, which are easily quantifiable and will benefit our planet." "Clearly, Taka Solutions were my favorites as they have a perfect energy-saving proposition complete with an app, hence a perfect solution for the business customer as well as the common citizen. A business idea that also benefits our society!" "We were absolutely delighted with the proposal Taka Solutions presented to The Venture judging panel. Their business plan has the capability of positively impacting both the environment in terms of energy savings, as well as individual consumers. Taka Solutions were worthy winners, and we are confident they will positively represent the Gulf in New York at The Venture Final in July.

Related: Three Tips For Turning Your Cause Into A Business "I think that Taka Solutions had a great handle on how gamification in a mobile app can encourage users to become interested in topics that may not garner the general public's attention- in this case, it's sustainability. Pairing the Taka Solutions business model with an engaging app to ultimately generate a culture of responsible consumption is, for me, what sets them apart and got my vote to send them to The Venture finals in New York." "Taka Solutions' pitch was confident and engaging. They are bright guys who understand their field. Their work to retrofit buildings with energy-saving solutions is admirable and also very important. However, it's the development of a personal app that really won me over; this technology will have a direct impact on peoples' lives in terms of saving them money and, in a larger sense, helping reduce the world's carbon footprint and reduce demand. This is scalable, smart, simple, and potentially game-changing."

TAKA SOLUTIONS ON THE VENTURE BY CHIVAS

JOINING THE VENTURE "The Venture as a competition and as a program has got to be one of the top tier demands in the world for enterprises that focused on solving big real world problems. I can't say enough about how great everything has been."

WHY SHOULD PEOPLE VOTE FOR TAKA SOLUTIONS? "Because we're addressing a real problem of our generation and the future of our planet, and obviously there's a good opportunity that within the people and using technology, we can make a very positive impact around the globe. And also our goal to save 20% of energy of the world- that's very beatable if we have the right support. So, if everyone can go out and vote, every little thing counts, and we'll be able to save the planet faster, and save people money."

A view of the app, Source Taka Solutions

PREPARING FOR THE VENTURE FINAL "In the lead up to every week, I have to present the pitch- every single week [in the office], then I get a seven-minute Q&A and I get some very brutal feedback. So we take that and then refine it, and then do it again next week. And so after five weeks, after I feel I've nailed it, the five-minute pitch, everyone's happy and agreeing with what we're saying and how we're saying it and what I'm doing it, then everyone in the company for the next week up to the run up is going to have to do the pitch themselves. So they're going to have to give a pitch, then I'm going to have to give in July, so that they understand what we do, how we do it, why we do it, and get really good at presenting, and give feedback and continuously just refine the pitch."

PITCHING "Dumb it down, make it so simple. Practice that early on, make a 5-10 slide pitch that really communicates all of your thoughts, and practice it. Talk to people, show your parents, show people that aren't related to you, and until you can really deliver that effectively towards everybody you thought would understand, don't put together the business plan, don't try to get funding, don't try to get acquired- really understand what you're doing and how to communicate it."

THE VENTURE'S ACCELERATION WEEK "We did the Acceleration Week in March in Oxford [University School] at the Skoll Centre for Social Entrepreneurship, [and] there isn't an amount of money that could have reproduced the experience that we got as [one of the] global finalists- [it was] really, a life-changing event. We got into it thinking it was all about preparing for the finals in July in New York [sic], but it ended up being much more of an empowerment course."

"An empowerment accelerator for the individual and the companies that all 27 of us represent, to really enable us to make a big positive change in the world- now and into the future. It was almost like a mini MBA hyper-focused [event] for people that are making a social positive impact around the world. Like I said, you couldn't really recreate it and because you have 27 like-minded people from around the world that have been through the same thing, they all speak the same language about a common goal and solving the biggest problems in the world using business."

Related: Dumyé Is A Means To An End