Innovations in International Trade is the latest special report by Entrepreneur Middle East, published in partnership with Lucidity Insights and sponsored by DP World Group, that takes a deep-dive look into the world of trade.

The report analyzes the historical evolution of trade, the rise and fall of major trading economies, the role of disruptive technologies and sustainability practices, and the impact of trade on global supply chains, inflation, food security, and so on.

Here are some of the major take-aways from the special report:

1. Today, international trade makes up nearly a quarter of the global economy. Trade has always been a major player in our global economy, but it has seen a dramatic rise in its prominence over the past 60 years. International trade contributed just 9% of global gross domestic product (GDP) in 1960, but ballooned to over 20% after the year 2000.

2. Trade dominance is moving from West to East. There was a time when all of the world's major trade hubs and ports were in Western Europe and North America. Today, the market landscape is quite different, with Asian cities leading in port traffic. Today, 13 out of the top 20 ports globally are in Asia, of which eight are from China alone.

4. Trade plays a role in inflation. The COVID-19 pandemic and the Russia-Ukraine war are two recent events that have caused significant supply shocks. These affect freight prices since they have grown from US$1,500 per container in 2019 to reaching over $11,000 in 2020. As the cost of containers goes up, the cost of goods rises too, as transporting the products across the world gets baked into the final sticker price, paid by consumers. These supply disruptions have undoubtedly played a part in the inflation trends facing many of the world's economies today. 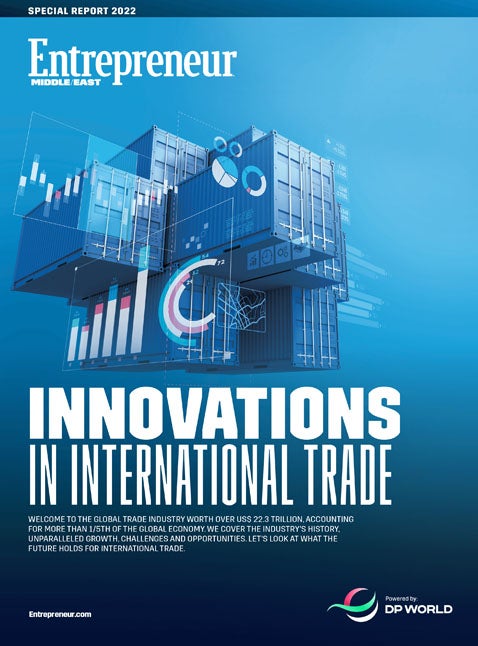 6. The increasing role of technology has made trade more economical and efficient. Technological evolution has impacted the evolution of trade, from the introduction of steamships, to the opening of the Suez and Panama Canal, containerization, improvements in locomotives, emergence of global value chains to the fourth industrial revolution led by digital technologies. The emergence of global value chains highlighted that being near was not as important as being efficient. The fourth industrial revolution, led by digital technology is leading the next wave of innovation.

The report also looks into how innovative companies in the trade sector address challenges that lie ahead. Here's one example- as freight transport relies heavily on fossil fuels, it's one of the largest areas which contribute towards emissions. In fact, international trade contributes to 7% of annual carbon dioxide emissions, mostly through freight. This value is set to increase fourfold by 2050, unless the industry takes initiative to address the challenges that lie ahead.

And one company is doing just that: DP World is working towards carbon neutrality by 2040. Announcements to decarbonize have been made by multiple firms, with the largest announcement made yet by Dubai's DP World, which is planning to invest up to $500 million to cut emissions by nearly 700,000 tonnes over the next five years.

Looking ahead, trade is set to play an extremely crucial role mitigating different concerns, and to learn more about how countries and companies rethink their supply chains, or what strategic investments can be expected in this sector, read the full special report here, courtesy of DP World.