For someone whose last name is a celebrated technology brand, I was pleasantly surprised to note that Jake Dyson had no airs about him when I met the man during his visit to the UAE in late February. Over the course of our conversation, he didn't talk about his lineage a lot (for the uninitiated, he's the eldest son of the legendary Sir James Dyson, founder of the multimillion dollar enterprise that is Dyson), but it became easily evident to me that he was a chip off the old block all the same- he is, after all, much like his father, an inventor, designer, and entrepreneur in his own right. Following his education in industrial design at the Central St. Martin's art school in London, Dyson worked for a while as an interior designer, though he admits to not have been too taken in by the way the discipline was perceived at that point in time, which was the early 90s.

"Design, in those days, was much more about how something looked," he remembers. "And it was all about making things look nice. So, design education was a lot about that, and I didn't really fit into that, because, well, for example, my degree was a water power generator that you put on drainpipes of buildings, so that when it rains, or you flush the bathroom toilet, you generate electricity. And they thought that was a bit strange, because everyone else is doing fancy things that looked nice, and I was in this sort of mechanical space. I've always been interested in mechanisms, but strangely when I left college, I did a bit of interior design work on my own as freelance. So, I designed a few bars, cafes, that sort of thing- quite good money, which is the reason I did it, and it was quite easy, actually, and fun. So easy, in fact, that I got a bit bored of it."

At this point, Dyson decided to go and work at his father's enterprise, and over the course of two years, he worked on a project from concept to just before manufacture- but it never went into production, because, as Dyson remembers it, it was too contemporary for the time (and it may be still be so today, he adds). But Dyson learnt a lot from the experience. "It did teach me how you work an idea to manufacture, those two years," he says. "But I felt a bit like I had moved back home, and into a shoebox- and I wanted to get out and, you know, make my own life, and do my own thing." And that's exactly what Dyson did. During his time working on interiors, Dyson had been getting increasingly frustrated with the lighting products in the market then- designers were, he felt, more focused on their externalities, as opposed to the technology that was powering them and thus make them more beneficial, efficient, and long-lasting. 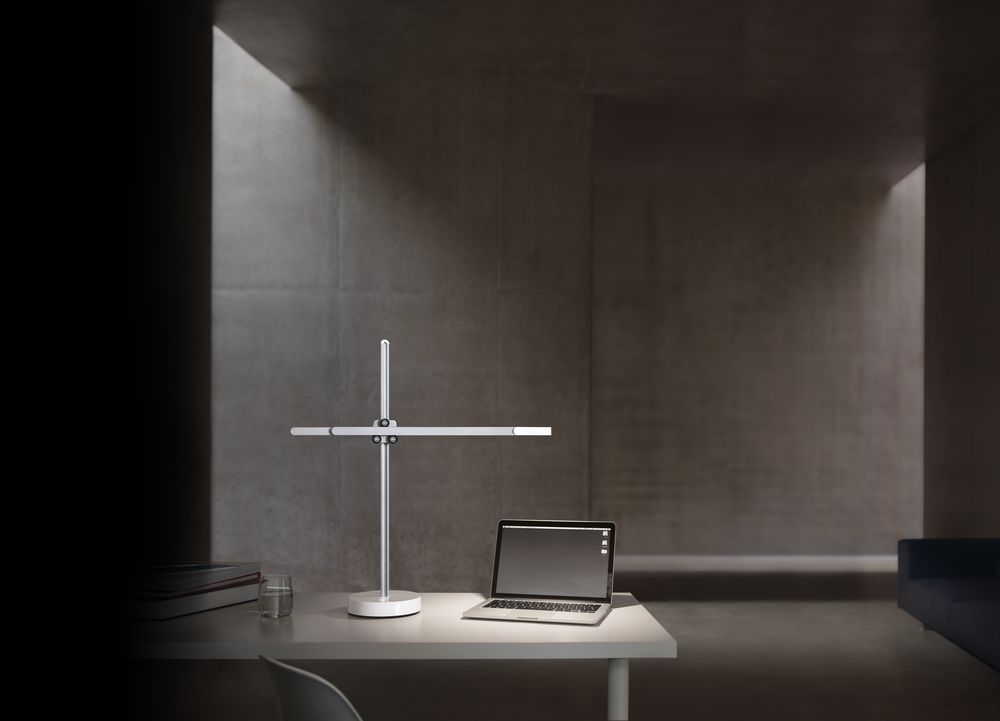 CSYS LED Light by Dyson. Image credit: Dyson.
So, I started to experiment with light, and understand how you could get more benefit from the projection of light," Dyson remembers. "And that led me into lights with mechanics- so, motorized lights that change the angles of light coming out of it. I started to learn about light reflectors, lighting technology, and more mechanisms and mechanics." It was around this time the industry at large was becoming increasingly focused on energy efficiency, and lighting designers thus turned toward LED technology to power their lamps. However, Dyson noted several issues with the products that were available in the market. "I couldn't understand why people were making LED lights that didn't last a lifetime, when LED [technology] had the potential [to do that]," he says. "So, I did a lot of research into how I could make that happen, and I had to make them run as cool as possible, so then, that led me to looking for, and developing cooling technology, which I did."

All of this led to Dyson setting up his own company, Jake Dyson Products, in 2004, which invented, manufactured and sold LED lighting products that aimed to overcome the issues seen with existing lights in the market. "I set up my own studio; I ended up with a team of about 12 people," Dyson remembers. "We were selling lights around the world into architectural projects, we were manufacturing three or four lights, marketing them… I learnt a lot by being very hands-on in all of those areas." And remember that issue Dyson faced with LED lights not lasting longer than they potentially could? One of the products that his enterprise came out with was the CSYS LED task light, a desk lamp that boasted of a lifespan of about 40 years. With innovations like these continuing to come out of Dyson's company (another of its noteworthy offerings was the suspended Cu-Beam light series), he thus began to be rightly recognized as a pioneer in his field in a span of just over 10 years, which, in turn, heralded the next phase of his career.

Given the success that Dyson's enterprise was able to achieve in the market at large (and not to mention its innovation-focused personal ethos), it wasn't too much of a surprise when his father announced in 2015 that he'd be acquiring the company, and folding it into the larger Dyson business. In this process, the younger Dyson, who had been a Non-Executive Director at Dyson since 2013, now took on more responsibilities at the company by becoming its Research and Development Director, as well as its Chief Lighting Engineer. In an interview with the Financial Times at the time of the acquisition, Sir Dyson noted that bringing his son and his company into Dyson was also an indication of its future as an enterprise and how it'd be run in the years to come. "The beauty of a family business is that you worry about getting the product right, not about any investors with short-term views or what others think," the senior Dyson told FT. "I would hate to be [a public company]. We can be very long-term, developing technology that can take years to come to fruition. We can be patient." 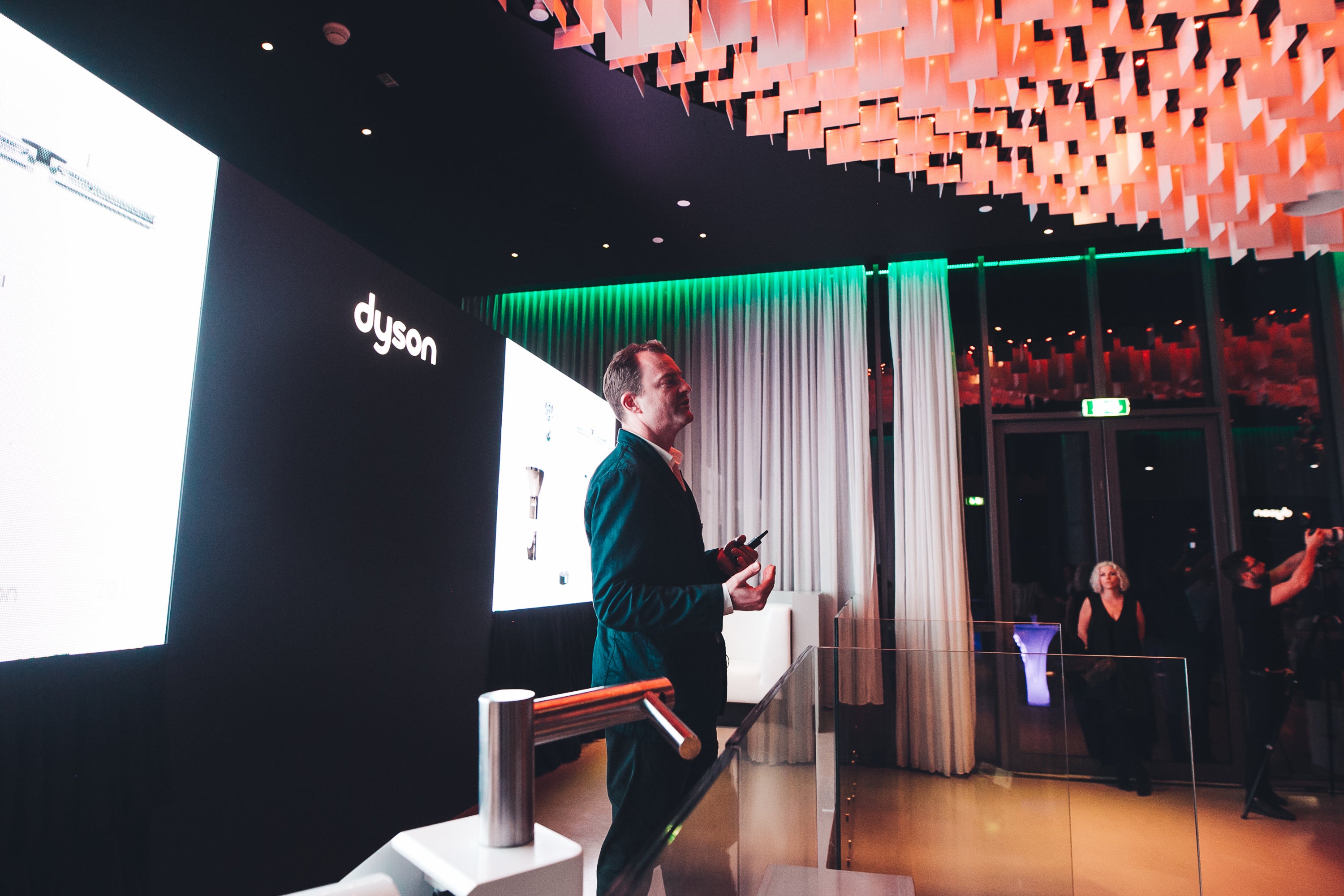 Jake Dyson at an event. Image credit: Dyson.
Indeed, this is the same reasoning that Jake Dyson reiterates today as he talks about Dyson's current standing in the market, where it has chosen not to rest on its laurels, and instead be focused on enabling innovation in whatever sector they can put their expertise into. And proof of this is now there for everyone to see: sure, its brand may have been established by its signature vacuum cleaners, but Dyson now has an assortment of innovative products to be proud of, be it bladeless fans, hair dryers, or yes, even desk lamps. "Dyson is completely unafraid to go into an industry where there are very established companies that have been doing it for decades- we don't care about that," Dyson declares. "We are not afraid about that. All we want to do is solve a problem. Invent things, and solve problems. Develop technology, invest in technology, to solve those problems, and make much, much better products. This is why, through the investment in technology and being focused on that, we are able to go into new areas, to design different products, to solve more problems, and to enter into new industry areas, and disrupt."

It is this particular aspect of the Dyson business that both Jake and Sir James Dyson continue to be fiercely passionate (and protective) about- they are not at all keen on comprising the inventive nature and vision of the company. (In explaining Dyson's running as a family business, Dyson notes, "We have a direction and a purpose for the business that we don't want to contaminate with shareholders.") From a personal perspective, Dyson himself remains true to his inventorial roots, and he was happy to share his insights to help those who may want to venture in his footsteps. "Don't give up," he declares. "Keep experimenting. The impossible is not the impossible at all. Something that is seen as impossible, you've just got to keep trying and solve the problem." But how does one know what are the, well, right problems to solve? "Well, I think talking to industry is key," Dyson explains. "You're talking to the industry to guide you, so that when the product is designed, it fits their needs. So, don't be insular; go out and talk to the industry. And the industry, you'd think, would shut the door in your face- but it's the absolute opposite. They are very interested to see what people are working on, and if they can help- because they are experts in that profession, so it's flattering."

But in the quest to solve a problem, Dyson warns against working on solutions that are only focused on the externalities, or worse, not fixing a real issue. "I wouldn't do a product if there's no problem to solve, or if there's no advantagethat's crazy," he says. "And also, I'd be very, very careful about designing something just because of the way it looks. Because looks go out of fashion, whereas the performance of a product doesn't." Dyson speaks from experience, of course- he's someone who has chosen to go against the tide plenty of times in his career so far, and yeah, it's fair to say that he's fared the better for it. "I've had one or two or the world's biggest lighting companies come up and say to me, "Why are you bothering to make a light that lasts more than seven years?'" Dyson remembers. "And I'd turn around and say, "Why aren't you?'"