In his first Middle East appearance, the VaynerX Chairman makes his presence felt at the 2018 Sharjah Entrepreneurship Festival by not sugarcoating the realities of startup life.

As someone who is considered to be a bona fide entrepreneurial celebrity by loads of people around the world, VaynerX Chairman Gary Vaynerchuk certainly looked the part when he came to the Middle East for the first time to be a keynote speaker at the 2018 Sharjah Entrepreneurship Festival in the UAE on November 20, 2018. Vaynerchuk had fans approaching him pretty much everywhere he went in the UAE- while you can see this for yourself by checking out the 7.5-hour-long video he posted on his GaryVee YouTube channel featuring raw footage of his time in the country, I got to see this happen in real time during his time at the event.

It was a delight to watch people's eyes light up when they realized that Vaynerchuk –the social media star with over 12 million followers around the world- was there, in the flesh, right in front of them, at the event: their jaws would momentarily drop, big smiles would then envelop their faces, and once that initial sense of awe subsided, they'd awkwardly fumble with their smartphones to make sure they capture this instant in time to post on their own social media pages. But while these GaryVee aficionados were reveling in the joy of having been able to meet an icon of theirs, I admit to have been both surprised and heartened to see how Vaynerchuk responded to pretty much every person who approached him. You could have asked him for a selfie, or you could have solicited some impromptu advice from him for your startup- regardless of the request, Vaynerchuk would reply to all of them, in a completely courteous, and, from my perspective, an overwhelmingly thoughtful manner.

For someone who's perhaps known better for his hard-hitting, hustler persona in video clips shared all over the internet, I found Vaynerchuk's kindness and humility to be a revelation of sorts, as it's a character trait that I believe we absolutely need to see more of not just in entrepreneurs, but in everyone. Note here that Vaynerchuk has been preaching the importance of kindness for quite a while now on his social media platforms, though it seems to have become more of a recurring topic for him to talk about only lately. But when I asked Vaynerchuk if this change in the tonality of his messaging, which today focuses more on things like mindfulness and self-awareness, as opposed to hustling and working the grind, was something he deliberately embarked on in the recent past, he replied in the negative. "It's a philosophy that's always been there," Vaynerchuk says.

"It's always how I acted, and I would say that it was 5-10% of the content that I was putting out, always. But I definitely feel like that when the world was not aware of the opportunities in entrepreneurship, and [people weren't aware of] all of the opportunities at their fingertips, I was very passionate about speaking about work ethic and opportunities. Now that we are in a world where everybody is trying to be an entrepreneur, I want to be talking more about self-awareness and balance, because I feel there are a lot of people in the game that are not emotionally cut out for it. So, I evolved based on the realities of the marketplace that I am living in."

Now, this response by Vaynerchuk should serve as a good indication of how this serial entrepreneur became the icon that he is today- he does seem to have a rather good knack in identifying (and capitalizing on) prospects in the realm of business, before they become, well, trendy, and the status quo of sorts. His career so far is indeed a reflection of this- the son of Belarusian immigrants in America, Vaynerchuk's "origin story" has him identifying the potential of the internet in the late 90's, and then transforming his family business into an e-commerce enterprise that went from making US$3 million in sales, to a whopping $60 million during his time at its helm.

This was also when Vaynerchuk's personal brand began to ascend- he was one of the first people to make use of YouTube as a channel for episodic video shows to market his business in 2006, through which his charisma and personality allowed him to build an engaged audience that was tuned into him and his ideas. His profile and fame grew, and a keynote address at the Web 2.0 Summit in New York City in 2008 then marked a turning point in Vaynerchuk's career. His speech at the event on building a personal brand within the social media landscape led Vaynerchuk to a $1 million, 10-book deal with HarperCollins, while also making him a highly sought-after speaker for major events thereafter. Vaynerchuk's prominence in the entrepreneurial realm grew further after he launched his full-service digital agency VaynerMedia in 2009 (which today boasts of clients like Chase, GE, Unilever, and more), which was around the same time he also became an angel investor in companies like Twitter, Facebook, and Tumblr. His business has since grown and diversified- Vaynerchuk remains the active CEO of VaynerMedia, which is now under a parent company, VaynerX, which he chairs, and has other enterprises like Tracer and Gallery Media Group under it. In the meantime, he has also become a five-time New York Times bestselling author, and perhaps more famously, a social media sensation in the startup space, with his content finding favor with entrepreneurs (wannabe, and otherwise) from all around the globe. 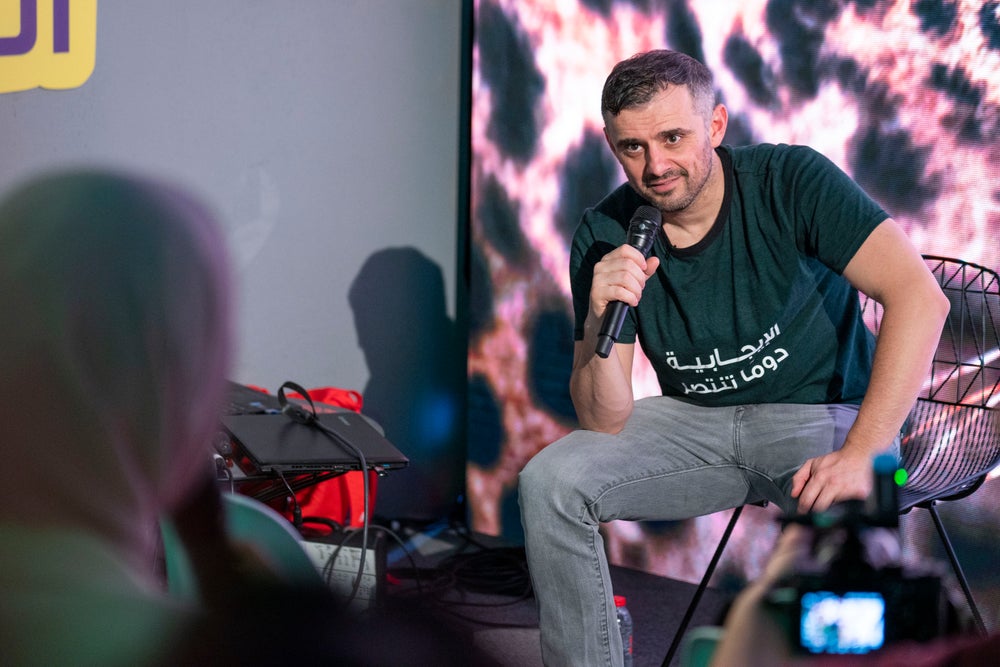 In case you are, at this point, wondering what's fueling Vaynerchuk to do all that he does, he has publicly stated that his lifelong dream is to buy the American football team, The New York Jets, but perhaps more importantly, Vaynerchuk claims to be driven by his want to leave a legacy on the world, by being the most impactful entrepreneur of our generation. A disclaimer here: what I have written above is an obviously abridged version of Vaynerchuk's career trajectory, and I'm sure there are many initiatives and ventures of his that I have missed including in my retelling of it. But what I hope the above paragraph makes clear is that Vaynerchuk is not just a social media star- he's an accomplished businessman, with quite a few entrepreneurial successes under his belt.

But not everyone is aware of this, particularly on the internet- it's easy to see that there are several "haters" of Vaynerchuk on social media platforms, whose critiques are, arguably, often misguided, and, most of the times, simply not based on fact. I ask Vaynerchuk his thoughts on negative feedback that he doesn't necessarily deserve, and he replies, "I'm a human being, and when you work as hard as I do, and you spend that many hours operating businesses that, you know, aren't just funded, aren't losing money, and aren't a house of cards, sure, there is a level of disappointment… But, to be frank, to be very transparent, I have empathy for people that, you know, say those things. I'll tell you why: if you've watched videos of me for a minute and a half, I don't have the audacity to expect people to dig into my truths. Right? People are busy, people have a lot going on… So, I have empathy, and a lack of audacity, and humility to understand [where they may be coming from]. I also know that the truth will win- at the end of the day, if I build a global communications company that is beautiful, then the results will speak."

Vaynerchuk's personal mantra when it comes to such criticism on the internet is that they are "the cost of entry for my ambition," he declares. "I want to accomplish things, and I put myself out there, and judgment comes along with that. But I know that in the end, only the truth wins, regardless, one way or the other. And so, I will be heralded for my good accomplishments and my good deeds, and I will be criticized for my mistakes and shortcomings, and I think that's fair… In the long-term, I think that I will prevail, or the truth will." It's his candor on topics like these (and many others) that, I guess, have made Vaynerchuk the beloved entrepreneurial icon for those who, to borrow the slogan from the 2018 Sharjah Entrepreneurship Festival, "dare to be different," and not follow the status quo when it comes to chasing their dreams and aspirations.

But in a world where it has become "trendy" to be an entrepreneur, Vaynerchuk also advises people to not enter this realm for the wrong reasons. "I think it is important to ask yourself if the only reason you're jumping into entrepreneurship is because it's cool now," he notes, and this was a topic Gary touched upon in his talk at Sharjah as well, and noticeably, quite early on in his speech.

He said: "I encourage every single person here who has the stomach and mindset for entrepreneurship, but I implore you, if you take anything from my keynote today, please go home and look yourself in the mirror, and have unbelievably honest conversations with yourself about who you are, versus who you wish you were. Today, entrepreneurship in 2018, in 2019, across the world, is put on a pedestal… Today, I walk into an event like this, and everybody wants a selfie, and I get treated this way, and it's unbelievable. But I promise you, as I stand here, I am mentally prepared for 2027, when the global economy collapses, and I start getting blamed for teaching or telling you to pursue entrepreneurship, when your startup fails. For me, this is my life- when it wasn't "cool,' now while it is "cool,' and in a decade, when it won't be "cool' again. I want that for you. Because when you do what you were meant to do, when you are able to put two fingers in your ears and hear nothing, not the hate or the negativity, but equally, not the admiration and the accolades, you're playing for yourself… My great fear, around the world, is that so many people here aren't playing for themselves- they are playing for their parents, they're playing for their friends, the things they buy, the things they start- the way they live is predicated on other people's opinions, not themselves. I'm not coming here to start with a buzzkill, but I also do not want to be delusional to the reality of the situation." 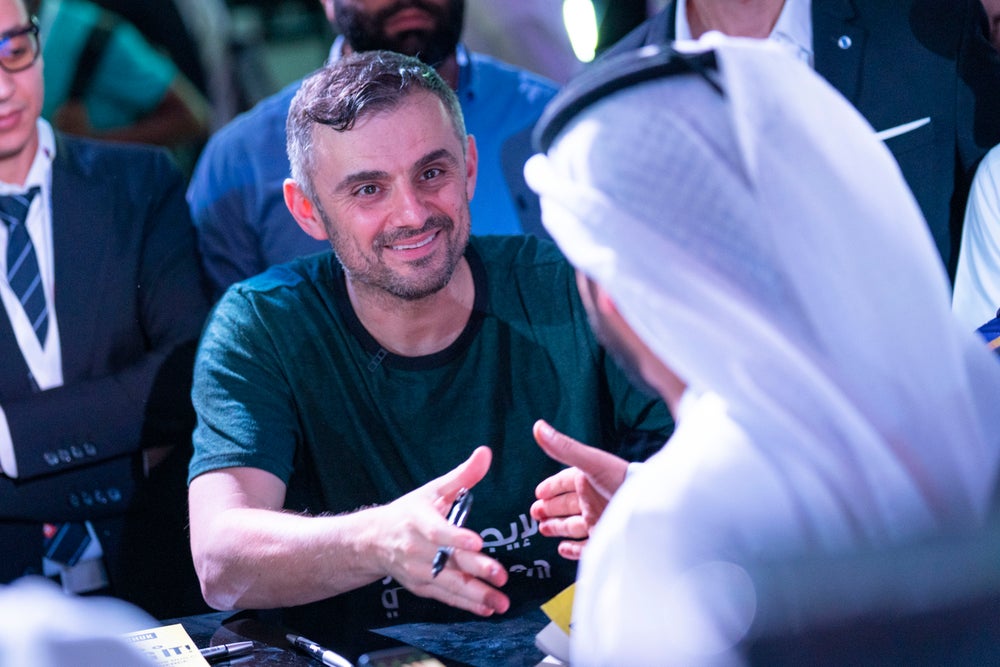 As sobering as this might have been for some of you to read, it's clear that Vaynerchuk is incredibly self-aware and knows what he's talking about- this is real talk right here, which makes him, in my opinion at least, someone worth listening to in your own entrepreneurial journeys. In terms of advice for entrepreneurs chasing their dreams, Vaynerchuk is of the opinion that in order for one to know if they are cut out for this kind of life, then one must let one's work (and only that) do the talking for that.

"If you really feel it [the need to be an entrepreneur], then you got to go and do it," he says. "You know, you're not going to know if you're a good painter until you start painting, or a great cook until you start cooking. So, I just I think you need to be lead with caution when you make that jump. Don't over hyperbolize what you're going to do and accomplish. Like, don't let your mouth get ahead of your actions, so that you then don't become, you know, a victim tied to your hyperbole. But the way to find out is to find out."

10 Franchises Reveal What They Look for in a Franchisee