I've always been drawn to Polaroids. The texture of print images, seeing the nostalgia-inducing borders, and hey, almost feeling like Ansel Adams. It's making a comeback; retro is in along with the (over) sharing of pictures and of course, selfies. Finding an opening in the event market, BlackBox transforms the usual offline photo booth experience at events into a social online experience. By having guests tag a photo on Twitter or Instagram with a predetermined hashtag specifically developed for your event, you can get a Polaroid-like printed photo from the booth. In turn, BlackBox generates advertising value around a brand's event as visitors promote it on their behalf, and later on provide an analytics report, allowing them to further develop their social media strategy.

Founders George Eid and Christine Dwairi, also business partners at PurpleGlo, the marketing company behind BlackBox, had the idea after seeing Polaroid photographers in Beirut streets and thought of combining people's love for the Polaroid and the ever-pervasive instant gratification of social media. Coupled with the duo's penchant for all things retro, Mad Men and its era's "sense of design", the Co-Founders try to preserve that "feel and keep it alive." Involving different prototypes and experimenting with materials, designs and platforms for software operation, the idea to inception stage took approximately four months.

Initially, they built the first prototype themselves, and then went to a production factory for the final product. When they started, they had a specific goal to enter the market- working with Red Bull. During their pitch to Red Bull Lebanon's Digital Specialist, they did a live demo and "a few minutes into the meeting, the whole Red Bull office was posting photos on Instagram and taking their photos and putting them at their desks," says Eid. It seemed that Red Bull liked the idea since BlackBox had their first event with them in September of last year. 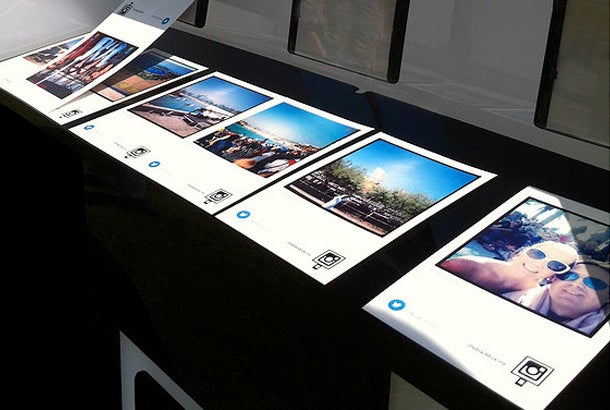 After launching in Lebanon, they began expanding regionally to Dubai and Doha, and then in North America beginning in Austin and New York. The Co-Founders share management roles with Eid overseeing the Lebanese market, and Dwaire running their operations in Doha and handling the Dubai market.

The BlackBox business model is fairly simple: the product can be rented to clients holding events and brand activations, while also building a "network of PR agencies, event companies as well as digital and social media ones that promote our product to their clients". This startup is already in profit mode, their ROI happened almost immediately- a major anomaly in the startup tech space.

"We have been able to cover all our initial investment three months into our operation, and have been operating in profit ever since," adds Eid. "We're looking to double our revenues in the coming year as part of an expansion plan that increases our penetration of the market." In terms of finances, the self-funded startup haven't considered funding rounds yet, with Eid remarking that "it might be an option in the near future as part of one of our global expansion plans."

Of course, every company has their struggles. For BlackBox, it's letting event-goers know that "The Social Media Photo Booth" BlackBox is onsite and ready for action. So it's crucial for event planners to have an effective marketing strategy that ensures BlackBox visitors. Other problems are also are weak Internet connection or non-existent ones in crowded areas, and the regular Lebanese power outages. Photos are only printed once they have been posted on Twitter or Instagram with a predetermined hashtag, so Internet availability and signal strength is key to user engagement.

Eid says that their future plans include a more interactive experience, "surrounding BlackBox with new real-time event based [on] social media products", and releasing an "unannounced product" in the market. Besides plans of becoming more pervasive regionally, they are also "flirting with the idea of franchising" out their product.

Prince point Want to have BlackBox present at your event? The cost ranges from US$1000 to $2500 in Lebanon, and $1500 to $3000 in Dubai. The cost for the booking depends on the size and duration of the event.

What you get Unlimited prints for event-goers, a post-event analytics user report, an onsite BlackBox representative, and an Internet connection.