We Just Launched An App... And It Went Great!

Brndstr CEO Simon Hudson on how his company went about developing Innbx, an iOS and Android app to manage multiple accounts on Instagram.

Over the past few months, we've been heads down busy building a new mobile app for multiple accounts on Instagram called Innbx for both iOS and Android. It started back in February during a trip to San Francisco. Whilst there, I got talking to a couple of people about an app we were building for internal use. At Brndstr, our main clients are advertising and media agencies, and one request we heard over and over again was that users needed to manage multiple Instagram accounts. We did our research and found that no such app existed- and so we built one.

Initially, Innbx was just meant to be a raw build that only a handful of people would use, but during my trip to SFO, I was told the app sounded exciting and I should apply to TechCrunch Disrupt due to take place in New York in May. I applied, was accepted to attend, and suddenly that was it- we were going to launch a mobile app in two months and it would be available on both iOS and Android platforms from day one- yikes! 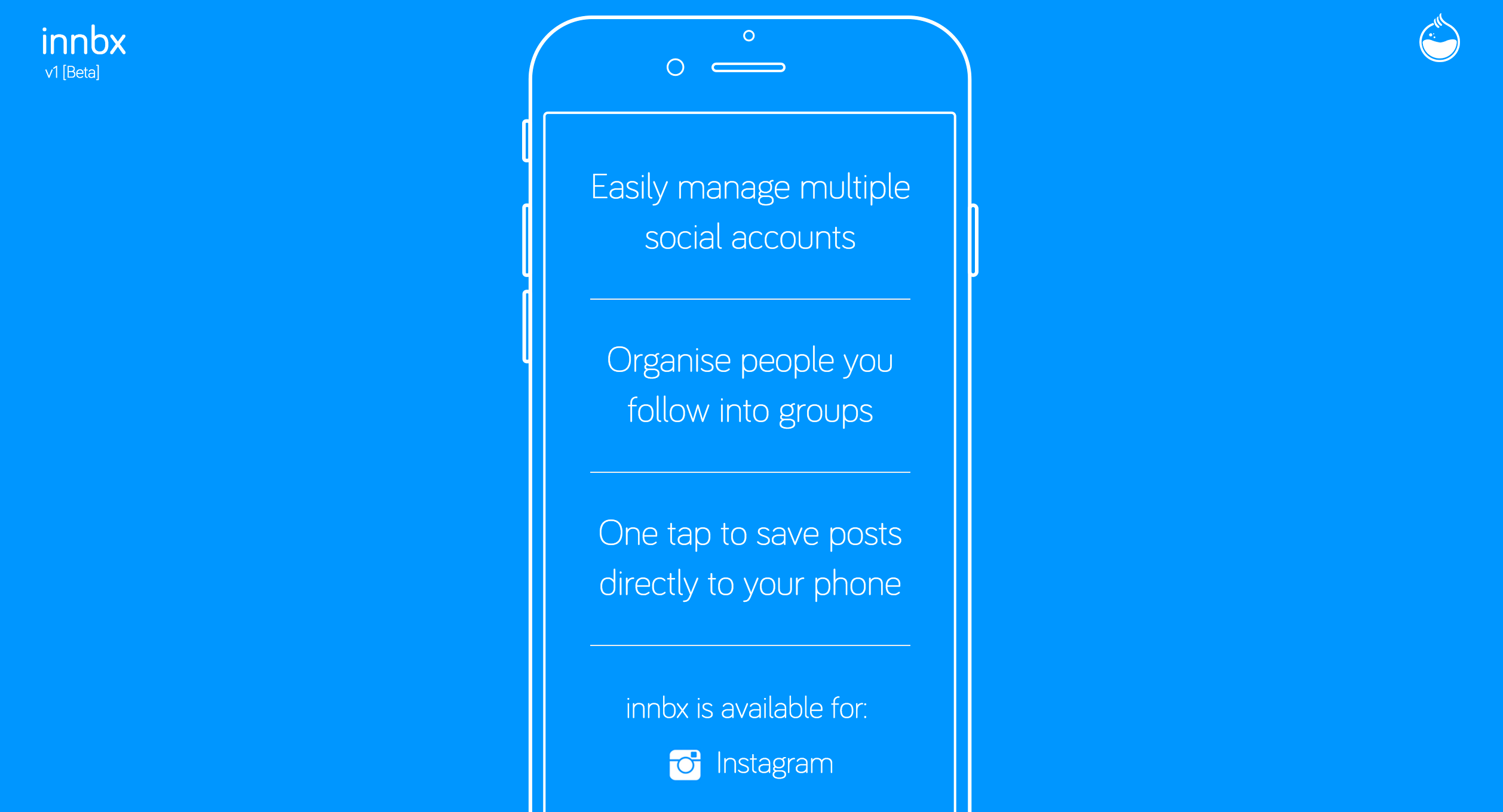 So how did we do it? First of all, you need a team. At Brndstr, we have spent the past 18 months building a fantastic team of talented engineers- our guys are quickly able to bring an idea to life. We cleared some space in the production schedule and set about designing how to take this raw, barebones concept we had into a fully-loaded, polished app ready for the New York event in May. During the months of March and April, it was exciting: the build was in full swing, and the Innbx app was slowly evolving. We had a small focus group in place who helped test the new features and give feedback, allowing us to swiftly shape the app and avoid any delays.

We had a plan- the app would officially be launching at the event in New York, however, as with any product, we wanted to gain interest and get the app known. As a company, Brndstr already helps brands create awareness campaigns, so we simply applied what we do for clients to our own app. Once the first version was ready and in the app store, we put our strategy into place. There are two major platforms we used to help with the awareness and downloads of Innbx: ProductHunt and Twitter Ads. For those of you who are unaware of ProductHunt, you are missing out! The website allows influencers (you have to be invited by an existing member) to "hunt' new products so the community can up vote up the ones they think are good, thereby creating awareness. I was lucky enough that the founder, Ryan Hoover, sent me an invite, so that I could add Innbx to the website. In our experience, ProductHunt is one of the best places to launch. We saw a huge spike in downloads after being featured, and I truly believe this has helped with the success of the app. We also used Twitter Ads as part of the strategy -an app Twitter Card and marketing spend will blow you away with the increase in downloads- at one point, we were seeing 1,000+ downloads a day coming just from Twitter. For anyone launching a new app, Twitter Ads are a must. 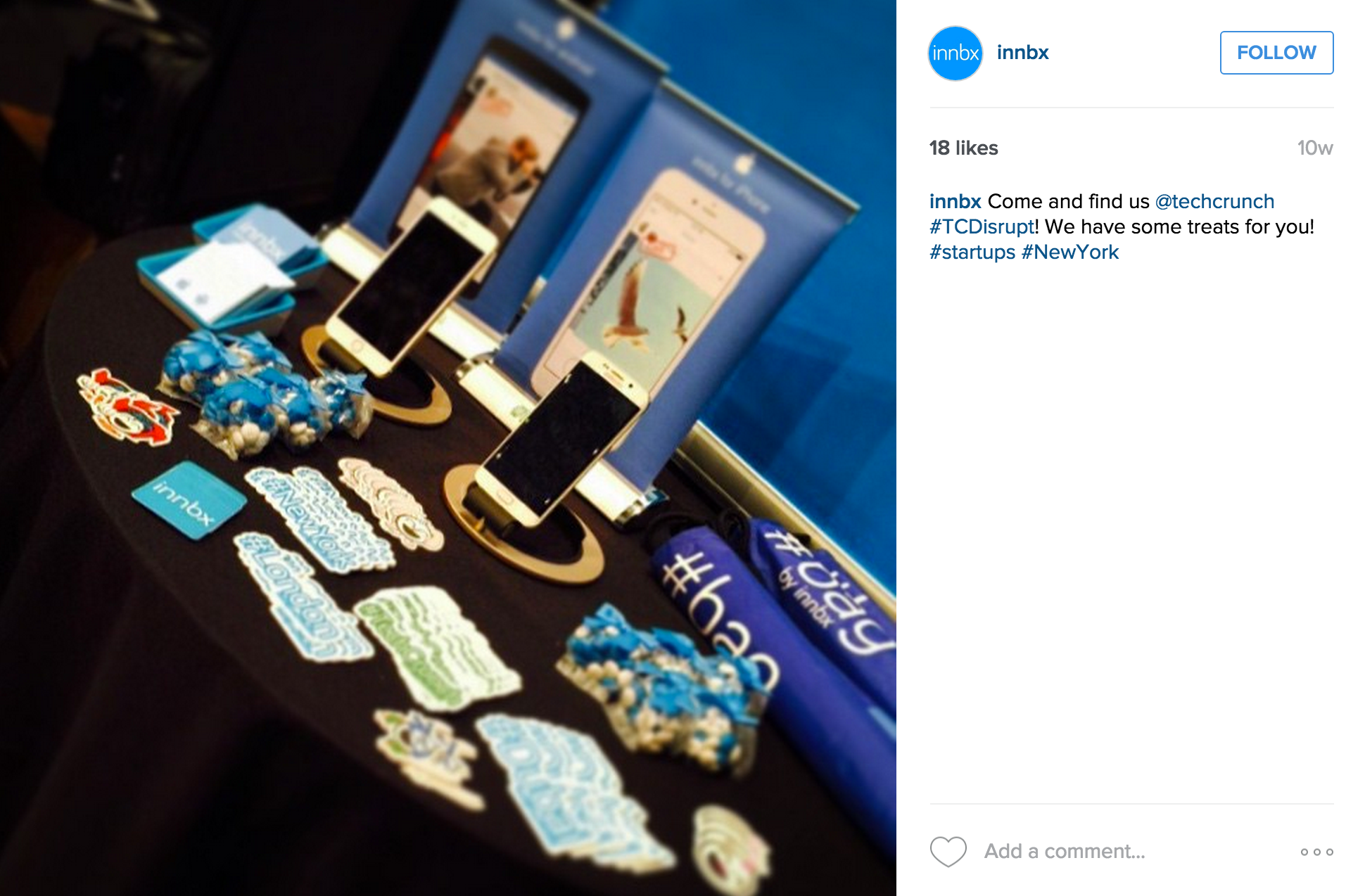 At the end of April, our team jumped on a plane and flew west to the big Apple. As a tech startup, especially one based on the Middle East, we felt a huge level of achievement being alongside some of the world's best startups and part of an event like TechCrunch Disrupt. The event was a great success and led to increased downloads for Innbx again.

So what did we learn? My advice for anyone looking to launch a new app in this hugely competitive world is to make sure that you are solving a problem. Innbx was born out of a need- people were looking for what we made. Secondly, make sure you have a release strategy: know where you will market your app, the period of time you intend to do so, and what the budget will be that you can allocate to marketing. There are no two ways about it: you have to spend money, unless you are lucky enough to get mentioned by a global influencer or news outlet, and even then, keeping the interest high will require a plan of action. Finally, keep it simple. Our app started as a complex web of features, but using the focus group meant we were able to remove parts that were irrelevant- don't ever guess what people want, make it a point to actually ask them.

The future now for Innbx is bright, and our team are already working on an Innbx for Twitter and Facebook, so watch this space. Best of luck fellow "treps, and good luck with your new projects!

Simon Hudson is the Founder of Cheeze, Inc., a company that aims to help people capture moments together via its mobile app called Privy. Prior to Cheeze, he was the founder and CEO of Brndstr, a social intelligent company established in 2013. Based in Dubai. Brndstr helped brands integrate social chat technologies into their company’s internal systems.

Before moving to Dubai in 2011, Simon was on the founding team of a London-based company Streetlife.com that sold to Nextdoor in 2017.

A passionate entrepreneur, Hudson was responsible for helping the early Dubai startup ecosystem evolve by taking global community Startup Grind to the city and mentoring other local entrepreneurs at Startup Weekend.

Leaders are judged on their results and respected for how well they treat people.

How to Write a Business Plan

Now that you understand why you need a business plan and you've spent some time doing your homework gathering the information you need to create one, it's time to roll up your sleeves and get everything down on paper.