Two Entrepreneurs Tackle The Software Engineer Supply In The US

By John Stanly
December 13, 2021
Opinions expressed by Entrepreneur contributors are their own.
You're reading Entrepreneur Asia Pacific, an international franchise of Entrepreneur Media.

In 2019, Gaper was founded by two tech enthusiasts as a marketplace for software developers. The "idea" was first brought to light on a retreat where the two founders, Mustafa Najoom and Ahmed Muzammil met for the first time. Mustafa is an accountant turned B2B Growth Hacker while Ahmed is a tech enthusiast and has been in the technology sector serving various roles from advising to leading. However, the journey that started off with helping businesses find the right resources soon found itself heads on with a global supply chain crisis.

"Sustainable supply chains were a pretty alien concept when we first started. More and more people were getting CS degrees and IT and technology was all the hype. However, in the midst of the startup and entrepreneurship boom, resource building took the back seat" says Ahmed Muzammil, VP Technology at Gaper.

Gaper has now vetted more than 1500 developers and has helped businesses set up remote development teams in countries across the globe. Even before the global pandemic, there was a looming developer shortage in the US. The global crisis caused by the pandemic however escalated the gap. It accelerated the country's digitization efforts, worsening the country's tech talent shortage. The IT talent crisis is worsening as machine learning technologies advance and drive up the demand for new skills, and 92 percent of enterprises expand their cloud workloads.

"We have been following the global tech talent shortage very closely. In our recently published trend report, countries like Japan, US, Brazil and even India are likely to be the worst hit. Businesses generally spend 50% more time hiring tech talent than other roles. Now add to that equation a shortage of specialized skill sets and you have a really big problem at hand", adds Ahmed.

According to Forbes and the US Bureau of Labor Statistics, demand for engineers with the correct skillset is predicted to increase by 22% from 2019 to 2029. With 62,900 job vacancies, software and application developer positions made up the majority of this total. There was also a high demand for IT support specialists (18,100), systems engineers and architects (16,600), systems analysts (13,700), and IT project managers (13,500). According to Korn Ferry's forecasts, the United States is expected to be short 6 million workers.

Ahmed and Mustafa both have a decade of experience working with startups and have built an amazing community to drive the change towards more sustainable supply chains. Both agree that the pandemic has driven a shift towards digitization and as much as this adds to the growing shortage, it also presents an incredible opportunity for businesses to start looking at on-job education. Most of the shortages worldwide, if not all, are driven by the inability of education systems to produce tech professionals with the right skills.

"There is no denying the fact that skills training programs and technical bootcamps have a pivotal role to play if we want to overturn this crisis. The world is seeing a shift in the way businesses grow and expand. The answer is in aggressive and effective skills training programs combined with businesses opening themselves up to hiring globally" Mustafa Najoom, VP Growth at Gaper.

All six technology domains covered in a survey conducted by Gartner – computer infrastructure and platform services, network, security, digital workplace, IT automation, and storage and database – mention talent availability as a major barrier to adoption. For the bulk of IT automation solutions (75 percent) and nearly half of the digital workplace technologies, IT executives highlighted talent availability as the top adoption risk issue (41 percent ). A similar survey conducted by Gaper also found that lack of talent and outdated skills (53 percent) is the most commonly cited reason by businesses as an adoption barrier to emerging technologies. 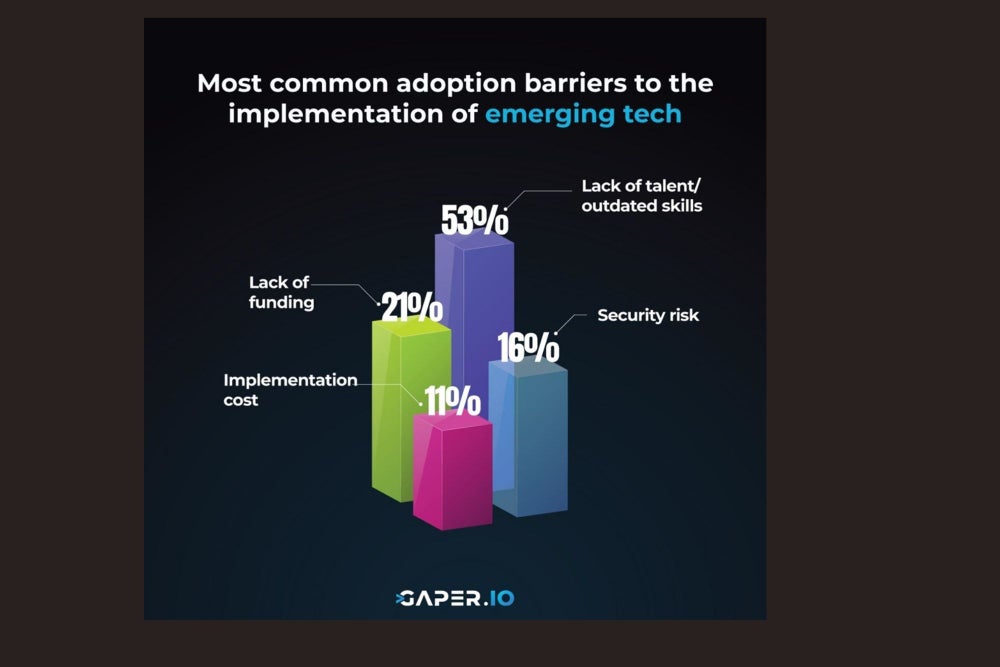 Apart from a lack of talent being the biggest barrier, it is safe to say that prices have also gone up for software developers. Even before the pandemic, digitization was becoming increasingly common, and more and more tech companies and startups raced to set up development teams. As mentioned before, this meant an increase in the demand for highly skilled developers and engineers and hence an increase in developer rates.

"We have seen funding happening at record valuation in the US as more and more startups looking to expand and grow. This has also resulted in an unprecedented 'price hike' in developer rates especially in the highly skilled experience bracket of 5-10 years... So what you will see now is essentially a race to secure tech talent and a huge bottleneck because there just aren't enough skilled resources for everyone!", added Mustafa.

Ahmed and Mustafa believe that marketplaces like Gaper, which are focused on building supply chains that are sustainable for businesses every step of the way, are the key to the puzzle. By 2030, the majority of "baby boomers" will be out of the workforce. Yet by that time, the newer generations will not have had the right training to take up the skill-intensive roles if we don't act now. The responsibility now falls on companies to incorporate training programs and on-site bootcamps and to also encourage governments to work on improving education systems to be more skilled-focused.

'Why me? Why now?': 8 Months Pregnant Woman Says Google Laid Her Off