Thanks to fierce competition for rapidly scaling up businesses in the Indian technology ecosystem, acquiring start-ups primarily for its tech talent rather than the product is gradually becoming a rage in the country. That's acqui-hiring for you.

Although coined in 2005 in the West, acqui-hiring is relatively a new phenomenon loved by tech giants like Facebook, Google, Twitter in Silicon Valley and Alibaba and Tencent in China. A case in point is last year's acquisition of Bangalore-based product start-up Little Eye Labs by Facebook for Rs 90 crore.

In India, big and emerging e-commerce tech companies like CommonFloor, Flipkart, Urban Ladder and Housing.com, and foreign companies like South Africa based media and Internet group Naspers' owned ibiboGroup have done acqui-hires. It is not about hiring regular run of the mill talent just to add up to the workforce. "These acquisitions are mainly done for the team. If there is a commonality in the work done by two companies, then there is a huge merit in bringing their teams together," says Ashish Goel, CEO and Co-founder, Urban Ladder.

The furniture e-tailer Urban Ladder acqui-hired online furniture and home decor marketplace BuynBrag in November last year for an undisclosed amount to expand its home decor segment. "BuynBrag is a small yet fantastic team that has taken on things independently at Urban Ladder. Prithvi Raj Tejavath, who co-founded BuynBrag, and his team are now heading the home decor space," adds Goel.

"We joined hands with Urban Ladder to create the best in home decor space. We are working to develop a unique range of home decor products for Urban Ladder with additional design knowledge and thinking," says Tejavath, VP–Home Decor, Urban Ladder.

More than the commonality of work, the race to acquire the best talent in the market with the increasing growth appetite of tech companies is encouraging them to do such acqui-hires. "I am tired of finding new people. I have spent around a year doing around 150 interviews for a product manager profile. I don't know where the good people are," says Advitiya Sharma, Co-founder, Housing.com. Set up in 2012 and backed by Japanese Internet and telecom major Softbank Corp., Housing.com is in talks to acqui-hire Delhi-based PropEquity, a B2B subscription based real estate data and analytics platform. The deal will help Housing.com earn revenues through PropEquity's B2B clients. 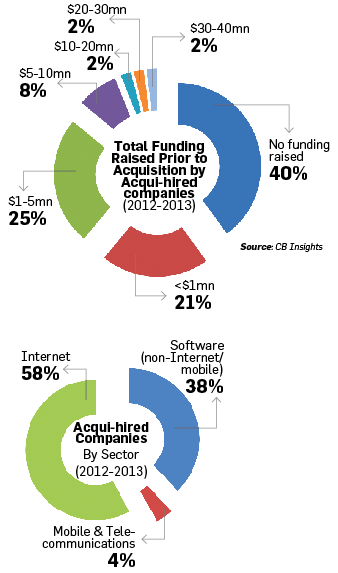 While product becomes secondary in acqui-hiring, companies like online real estate portal CommonFloor have done acqui-hiring where product was out of the picture. Bullish on mobile, CommonFloor acqui-hired Bakfy in January this year for an undisclosed sum for its team's proven capability in growing a mobile-only social network in India. Bangalore-based Bakfy is an anonymous app for college gossip and experience sharing among students and will help Commonfloor in products on social and mobile.

"We liked Bakfy's team but what they had built was not directly useful for us. They demonstrated their understanding of building a product on mobile and understanding social media. They had great ideas around real estate so we thought that the team could help us build innovative technologies to help people find properties online," says Sumit Jain, Co-founder and CEO, CommonFloor.

Over the last many years, the acqui-hiring trend has also been there in other sectors as well. French company Schneider Electric, which acquired 74 per cent stake in power backup and power solutions provider Luminous Power Technologies in 2011 for around Rs 1,400 crore, helped it to enter Indian B2C market.

"Companies have always looked for getting specialised talent via acquisitions. During 2011, a large part of Schneider's revenues came from B2B while we were a B2C retail-focused consumer company with a great distribution network. They wanted to foray into retail business, which was B2C, as they had done that in other countries. Hence they acquired a part of our business," says Rakesh Malhotra, Founder and Chairman, Luminous Power Technologies. 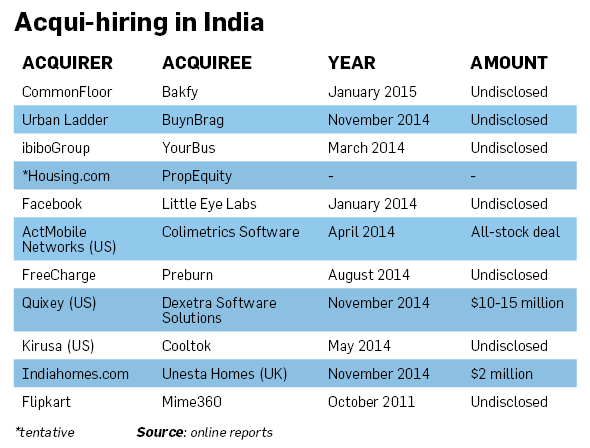 An Alternative to Shutdown

Acqui-hiring gives a kind of an exit to the companies, which are not able to hit their growth targets within time for multiple reasons, including inability to raise funds. As a better alternative to shutdown, acqui-hiring allows investors in businesses to recover some or most of their money and allows entrepreneurs to join a company they admire and create a possibility of earnouts in the future. "The acquiree gets an opportunity to work with a larger company and achieve its goals with more resources and backing," says Tejavath.

Started in 2011, online bus tracking and analytics platform YourBus was acqui-hired by ibiboGroup for an undisclosed amount and integrated with ibibo's existing online travel portals, redBus.in and Goibibo.com. However, Rajesh Mallipeddi, Co-founder of YourBus never wanted to sell the business. YourBus used to charge bus operators for sending them MIS reports to monitor daily operations regarding arrival and departure timings of buses.

"We had more than 100 buses on our platform, but we wanted to take it to around 1,000 buses. Being a value added service, it was very tough to convince bus operators to buy our services. Hence we approached ibiboGroup seeking an exit. Given that ibiboGroup already had redBus on its platform, it was complimentary for them to acqui-hire us for our team's expertise in live bus tracking as well as for us to continue build what we wanted to through ibibo's established platform," says Mallipeddi. The entire YourBus team joined redBus. Angel-backed YourBus couldn't think of Series A round without finding clear growth path.

Acqui-hiring plays an effective shortcut to hiring best talent in large number than taking the traditional HR route which also filters out those that don't have the entrepreneurial spirit.

"Sometimes building great talent takes very long time. For example, if you want to get a large set of people around 100-200 in your company, hiring them through HR route will take a lot longer time and it will be difficult too," says Goel.

Though difficult but factually, hiring through HR has the cost benefit over acqui-hiring which is highly expensive. However that's not a smart move for growth-hungry entrepreneurs. "Instead of the cost benefit of hiring talent through HR, it is important to see its opportunity cost which is faster scalability of product and business growth that comes with acqui-hiring. So it is a strategic investment," says Naru.

A hyper-competitive technology landscape like India will see multi-fold increase in acqui-hiring deals. Good but how disruptive can be the company's success post that is debatable.