With Byju's, OYO, Ola in its Kitty, Sequoia is the Top Investor in India

The Indian arm of US investment giant Sequoia capital has emerged as the top investor in India with eight unicorns—unlisted startups valued over USD1 billion—in its kitty, as per the Hurun Research Institute.

Hurun has released its India top unicorn investors list 2020 that lists out all the investment firms that have invested in three or more India-based unicorns.

Also Read: 40 of the 61 Unicorns Founded by Indians are Based Overseas

"These investors play a significant role in accelerating the creation of new wealth in India. The success of these investors goes on to show that Indian HNIs should actively start allocating part of their portfolio towards start-ups," said Anas Rahman, MD and chief researcher, Hurun Report India.

Sequoia Capital has closed seven funds in India since its debut in the country in 2006 and holds investments in over 150 startups. Earlier in July, the VC fund announced two new India dedicated funds— venture fund of USD 525 million and growth fund of USD 825 million—totalling USD1.3 billion.

After Sequoia Capital India, Japan's Softbank and UK's Steadview Capital shared the second position on the list having invested in seven unicorns each.

In 2019, Softbank made just one fresh investment in India by pumping USD 275 million in Lenskart through its Vision Fund.

Saif Partners, Matrix Partners, Indian subsidiary of US's Matrix Partners, Ratan Tata's RNT Associates, media conglomerate Bennett Coleman and Company and Chiratae Ventures are the other Indian funds to have made it to the list. 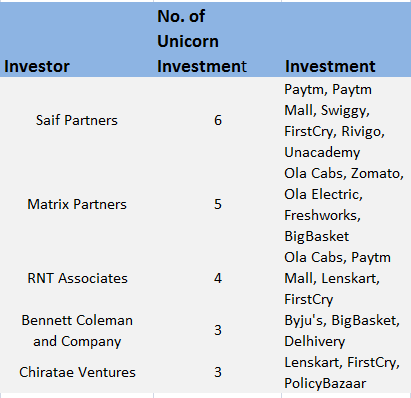 Hurun has used regulatory filings and feedback from the VC funds in their research. The report has listed only those unicorn companies that were founded and "not-exited' after the year 2000. For this year, Flipkart has not been included in the list as it ceased to be a startup and unicorn after the Walmart deal in 2018.

4 Films to Watch this December