Sign spinners--or 'human directionals'--are trying to stop traffic with eye-catching tricks and acrobatics. Does it work?

In pockets of the country, at city street corners, a curious thing can be seen among the motion of jackhammers, honking of cars and throngs of people passing by: sign spinners.

It's not what it may sound like--that is, a neon or wooden sign, spinning around and around, thanks to an extension cord plugged in somewhere. Sign spinners are people holding signs, usually in the shape of an arrow, with a company's name and logo emblazoned on it. At first, that may not seem like an improvement over a neon sign or a person walking around in a sandwich-shaped billboard, but these sign spinners take it up a notch with tricks, dancing and other acrobatics. It's advertising, but it's also something of a sport--even a performance art. 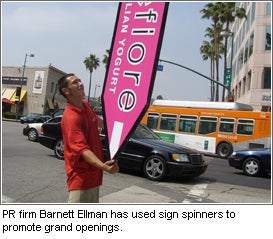 Sign spinners are quickly gaining status in the corporate world as a reputable and innovative way to promote a business. "We've used them for grand openings," says Tyler L. Barnett, co-owner of Barnett Ellman LLC, a public relations and marketing firm in Los Angeles. Barnett has been hiring sign spinners to celebrate the opening of Cefiore, a nonfat yogurt restaurant chain that has been rapidly growing in Southern California. "The cars stop, they honk, they slow down. They really get a lot of attention. It's a traffic stopper."

The First to Spin?
Although numerous entrepreneurs claim to have invented the concept of sign spinning, Joe Ambert, 22, director of marketing and a founder of Aarrow Advertising, insists the credit belongs to his company, particularly because of the efforts of their CEO, Max Durovic, 24, and COO, Michael Kenny, 23. Five years ago, a group of then-teenage friends worked for another sign company. While they were paid to merely hold the signs, they began spinning them in the air and dancing with them. Their employers had no problem with their goofiness, since the methods seemed to be working.

But Durovic, Kenny and their friends left because they say they weren't treated well and believed they could run their own company much better. And why not? They were all young and energetic, and Ambert says they all had an avid interest in skateboarding, surfing and other activities requiring physical prowess, skill and dexterity. 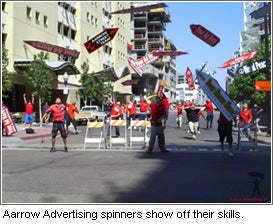 That was in 2002. Now, Aarrow Advertising--where everyone from the payroll manager to the director of human resources is also a sign spinner--expects to bring in more than $4 million in revenue this year, almost double 2006 revenue. They have 500 employees and several offices--three in California, as well as in Las Vegas, Phoenix, Washington, DC, North Carolina and Florida. Their clients range from apartment condos to restaurants to retail outlets. Even celebrities, like rapper Snoop Dogg, have employed them; in his case, to promote an album at an awards show. (Click here to see Aarrow Advertising spinners in action.)

The Theory Behind the Theatrics
Wade Swormstedt, editor of Signs of the Times, a trade magazine for the sign industry in Cincinnati, Ohio, explains that this is a variation of a technique long used in advertising. "Motion attracts attention," says Swormstedt, "which is why you will see chasing neon lights, signs that actually rotate, full-wrap transit vehicles and trucks whose only purpose is to carry ads."

Barnett concurs. "We're so inundated with still images everywhere you look, and so when you actually see something moving, it really catches the eye. The average person really only has the attention span of one or two seconds, so when you want to tell someone about a product, you really only have a couple seconds." He adds that the internet has proven people like to participate in the media. "So with sign spinners, people are attracted by what they see. They can participate by clapping or honking or taking pictures, and they'll also read a message, and that message, of course, is our client."

While Ambert says, "We're out there because we love doing it," his company obviously is doing well. It can cost approximately $60 to employ one sign spinner for an hour. Although Ambert adds that Aarrow Advertising only needs one or two to be effective.

Perhaps the growing success of spinning is a sign that sometimes humans can still do a better job than technology. It could be a testament to the idea that almost any skill can be a useful addition to the economy, if used in the right way. Or maybe sign spinning is a measure of how desperate companies are to get the public to notice them.

No matter how you look at it, you will look.

An authentic celebration of Black heritage throughout the year can help companies foster understanding and empathy among coworkers from different backgrounds. Such a celebration also allows employees to learn more about their colleagues' experiences, which promotes a deeper sense of community and understanding. How to be a Better Ally in the Workplace During Black History Month — and Beyond.