For real estate and design mogul Jeff Lewis, success is about longevity--sprinkled with a touch of control. 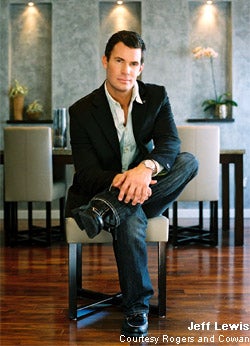 Most entrepreneurs could probably use a good therapist. But for Jeff Lewis, it was therapy that led him to a career as a real estate entrepreneur.

"I had a really good therapist when I was young," says Lewis. "He gave me some great advice. He said, 'Go get a job. You work there for six months, and at the end of six months you evaluate. Is this something you could see yourself doing long term? If so, you hang around another six months. If not, move on to the next thing.'"

Lewis took the advice to heart, bouncing around from job to job for six years until he noticed a common thread among the jobs he enjoyed doing: They revolved around real estate. He also had a love of architecture from the 1920s, '30s and '40s and noticed a mounting wave of people buying houses from that era, homogenizing them with a fresh coat of white paint and some new carpet, and selling them for a profit. And with that, the world's most notorious house-flipper was born.

"I thought, 'Wait a minute--rather than bastardizing these houses, what about doing something a little bit more interesting that was really more of a restoration, but also blending in modern elements?'" Lewis says. "It was like a new business was born because then people would come in and it was like they'd fall all over themselves for these places."

Lewis set out to do more than flip houses--he was using furniture, candles, fresh flowers and other design elements to create a lifestyle. He moved from project to project until he was eventually able to make enough money to juggle multiple house-flips.

Eight years later, a production company came calling and proposed a real-life "dramedy" based on his business, with him as the star. At first, Lewis saw Flipping Out as a three- or four-month investment of time and energy that would generate some more capital for his business. But the Bravo show quickly became a hit, and more important, a sustainable source of long-term opportunities that went well beyond a few extra bucks. It's something Lewis didn't see coming, which, for a guy who looks at surprises the way other business owners look at bankruptcy, was an eye-opening experience.

"I'm very controlling. I'm very organized," he says. "I'm a goal-setter, a planner, and I always thought there was this direct plan to success where you go from A to B to C to D to E. But in reality, you go from A to X to G to L to B. I never thought in a million years that I'd be on television. Everybody has opportunities, but you have to be very open to them."

Combined with his relentless focus, Lewis's ability to adapt and to see new opportunities has kept him and his business afloat during arguably the worst real estate market in history. He's taken the elements that were so crucial to his initial house-flipping success and made them the focus of his expanded design and renovation business. This means dealing with both contractors and clients, but it also means a steady paycheck--and relatively less anxiety.

"Having all my money out at one time spread out over five houses is a lot more stressful than dealing with some high-maintenance housewife," Lewis says. "So [now I'm under] a different kind of stress. It's the stress that I can forget about at 6 o'clock at night, whereas when you have all your money out and you have $600 in the bank and you're waiting for something to close that's going to bring you $400,000, that's a different kind of stress. That kind of stress never leaves. You can't turn it off."

Lewis is also branching out into the retail world with a line of home design products that will debut on QVC next month, and he made certain the line had his stamp on it from the start. He completely avoided any semblance of a licensing agreement so that he could maintain creative control, even going so far as to cut the line down from 14 products to eight, a move he knows will mean fewer sales now but which is part of a big-picture view of his own success.

"I'm looking for longevity," Lewis says. "Whether that longevity is three years or 20 years, I would rather see that last, and I think from a business perspective, it makes more sense than it does to just cash out. I want to continue to maintain my name and my reputation, which, I believe, is synonymous with quality."

With so many plates in the air, it's more important than ever for Lewis to be able to rely on other people, and his unique relationship with his employees has become as much a part of his brand as any of his multimillion-dollar properties--and for Lewis, his employees are even more valuable.

"I've had attorneys contact my employees trying to issue some sort of class-action lawsuit against me, but the fact is that these people are like family," Lewis says. "This is why we have such an eccentric group of people here--because we do things differently. We've been called crazy, and maybe we are, but we all get each other. The people who work for me understand my way of thinking. They know that they have to be accountable when they make mistakes, and I have a very unusual way of reprimanding and punishing. But it works."

Lewis's employees are subjected to a gauntlet of strict rules with consequences ranging from subtle lunch-table ridicule to a day in "the smock," a large white painter's smock reserved only for the worst transgressions, such as taking the company credit card home for the night. But through it all, they're fiercely loyal because they know that they'll be taken care of by the only person in the company more dedicated than they are.

"Nobody cares about my business as much as I do, and that's just the way it is," Lewis says. "Even though these people are loyal and dedicated and will go to war for me, at the end of the day, I'm working seven days a week. I'm thinking at 8 o'clock at night of ways to grow my business. They're not, and I don't expect them to. They're with their families. They're having fun. This is how I have fun. This is what drives me. So I don't expect anyone to work or think about my business as much as I do."