From Cupcakes to Muffins: How Baked by Melissa Plans to Find Sweet Success Once Again

On top of cupcakes and macarons, the New York bakery chain just added muffins to its offerings.

In 2008, Melissa Ben-Ishay was fired from a marketing job. The following year, she turned a favorite pastime into a business and opened her own bakery. Called Baked by Melissa, Ben-Ishay looked to differentiate the bakery from others by focusing on bite-size desserts. The reason was simple: Indulge in a sweet treat without feeling guilt.

Today, Baked by Melissa has 13 locations in the greater New York City area, including one in JFK Airport, ships nationwide and expects double-digit sales growth in 2017. The chain is known for its mini cupcakes, which come in creative flavors such as "tie dye" and "sugar cookie cheesecake." Since its inception, it has expanded to other dessert lines: gluten-free cupcakes and bite-size macarons.

Related: How Getting Fired Turned Into Sweet Success for This Entrepreneur

Yesterday, Baked by Melissa announced a shift away from being strictly a dessert shop with the announcement that it is adding six flavors of muffins to its menu: cereal, blueberry, corn berry, cinnamon crumble, banana chip and lemon poppy. They're $1 each, though until Dec. 18 customers can try one of each for $5. The company is one of many food purveyors that has adapted its offerings to take a bite out of the breakfast snack market.

The number of times per year people eat a morning snack -- either at home or away from home -- has increased by 17 percent over the past six years, according to NPD Group. But breakfast isn't confined to the before-noon time slot. From 2013 to 2015, the proportion of people who reported they enjoy eating breakfast foods at nontraditional times increased from 48 to 54 percent, according to Technomic. McDonald's began offering breakfast all day in October 2015 in response to customer demand.

In a brief interview, Ben-Ishay told Entrepreneur what inspired the expansion into morning morsels and shared what she's learned so far about moving into a new market.

The interview has been edited for clarity and brevity.

Why did you decide to add muffins to your offerings?
I love muffins. And whenever I see them in a cafe, I want to buy one, but I can't commit. I know I'm going to either feel bad about eating the whole thing, because I have no self control, or I'm going to waste it and throw it out. So the thought of doing bite-size muffins just made sense.

We are now introducing a breakfast product, which is something we've never done before, so it's going to increase traffic into our stores in the morning time. We want to be more important to our customers who love our products already and give them more opportunities to experience Baked by Melissa. We think that muffins is the best way to do that.

Do you recall the specific "a-ha" moment when you decided to expand to breakfast muffins?
I've actually been thinking about muffins for quite some time. We brought in a new CEO, Seth Horowitz. He comes from Everlast; he's amazing.

The first time we met, when we knew he was going to start as CEO, we met at a cafe. I purchased two large muffins and put them in the middle of the table. And when he said, "What do you want to do as our next product line?" I said, "Muffins." When he asked, it was just serendipitous and magical.

I remember a few weeks later, I was heading to another meeting with our whole leadership team to talk about the future, our mission, value proposition, all of that fun stuff. I stopped at another cafe in SoHo and purchased two muffins, again, big muffins that I brought to the meeting and shared with a lot of people. But it was hard to serve them -- I made a mess, there were crumbs everywhere. It kept enforcing the need for us to be part of your morning and make bite-size muffins.

Breakfast is a challenging meal for food-focused companies. How did you prepare to be successful in this area?
We changed our store hours. Our stores are open a little bit earlier in the morning, so we can make sure to accommodate the breakfast rush.

From a product perspective, we worked on this product until we had it perfect. We came up with a lot of different variations of each flavor until we settled on each one.

Related: Get Your Product to Market in Six Steps

There must have been a lot of trial and error before the rollout. Can you talk about how you approached some of the decisions you had to make?
With anything with do at Baked by Melissa, flavors are always so important to me. I always want them to be classic, recognizable, but also fun. Flavors that make you happy and maybe even bring you back to your childhood.

So with our six flavors, I think I accomplished some of the classics that you expect and almost want when you're thinking of muffins.

It was just an opportunity to do new things, keep it fun and light, and of course delicious. For me, when we have a new product line, it's just something that clicks. You know that your customers are going to love it. 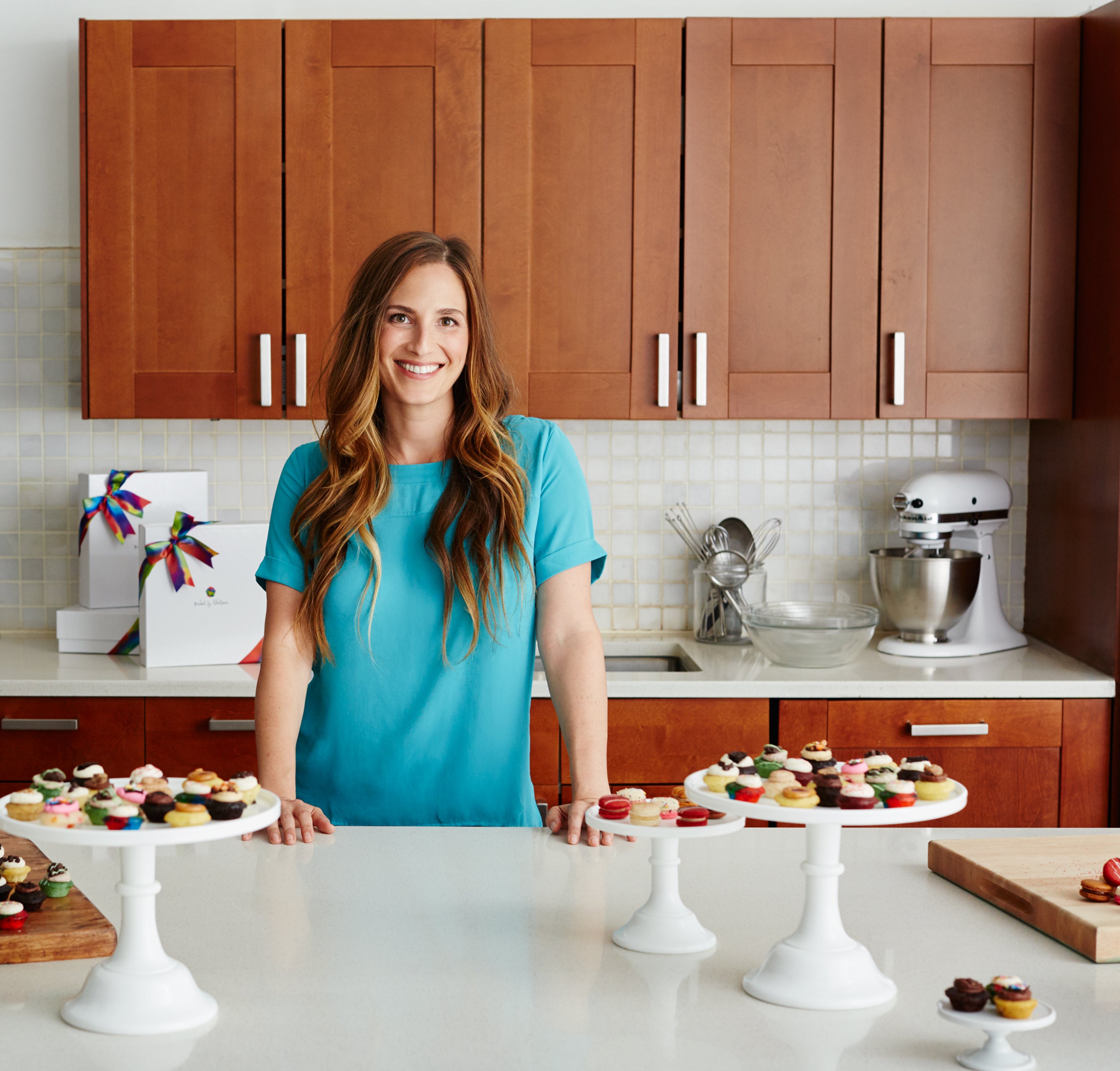 And what about the approach to stores and production?
In the stores, we changed a few things around. We have muffins on the top shelf of our display cases. If you walk into any one of our store locations until Dec. 18, we're offering a sampling pack of our muffins for only $5, because we want everyone to try our muffins and experience what we've been working so hard on.

From a production perspective, it's really fun to train a team to make the muffins. Because, in my eyes, we can always be better. For product, it has to be perfect and delicious. I also just selfishly enjoy making the muffins every day. There's nothing I'd rather do.

We didn't really have to add to staffing. But I did get to go to store meetings yesterday. At all of our stores, our GMs held team meetings, and Seth, our CEO, and I went. We were a part of the excitement of getting people introduced to the flavors. They tried them, loved them and we talked about how exciting it was and how to make sure that energy translates throughout the day.

The challenge just came with the planning. We had a tight turnaround time. Once I create a new product line, and everyone tastes it and loves it, there's just a race to get it into the hands of our customers. So waiting for the ingredients to arrive is always like, "Oh my God, come on, let's just get it done!"

Why did you decide to launch the muffins now, during the first week of December?
This is our busiest time of year, but if we could have launched any sooner, we would have. In my experience doing what I'm doing, we've never had a great product that we wanted to launch and waited around with it. We do it when we can. But the timing is right for muffins.

What other sorts of challenges have you faced when making the move to breakfast muffins and a new market?
As an entrepreneur, you're always looking to find solutions for problems. I think part of the magic is just constantly asking yourself, "How can I be better?' "What could we be doing differently?'

So now we just launched our third product category. I could've never imagined doing more than cupcakes eight years ago. So, of course there's a challenge in that. We're doing something new. It's a change. We have to educate everybody on our team to make sure that the messaging is consistent in our stores, on our website, in our kitchen, you name it.

Related: 6 Things Effective Leaders Should Do to Inspire Their Teams

I think the challenge is what's so exciting. That's our culture here at Baked by Melissa. Hard work is the most fulfilling thing you can do every day, and everybody wants to be a part of that.

With the cupcakes, it makes sense that many people may want just a small indulgence for dessert. However it seems like people may need more than one mini muffin to sustain themselves in the morning.
I think that's the beauty of our bite-size muffins. If you don't want to feel like you ate anything, you could have one, and it's this bite of happiness. Or if you're used to having maybe a full-size muffin, you could have six or even 12. Each one is 40 calories, so it's guilt-free, and you could try them all.