Go Where You Don't 'Belong'

To get where you want to go, start out where you don't fit in. You'll be happy you did.

By Jason Feifer
July 6, 2021
This story appears in the July 2021 issue of Entrepreneur. Subscribe »

Show up where you don't belong. Because one day, you will.

That's what I've learned repeatedly in my career as I've pushed through the impostor syndrome. Sometimes validation came quickly. Sometimes it took years. But cumulatively, I've learned that people can never truly feel empowered — and never truly grow — if they don't insert themselves into uncomfortable situations and reveal how much they belong.

It's something I was pleasantly reminded of recently when I interviewed an NBA star I'd nervously met a long time ago. Here's the story.

Back in 2010, I was a junior editor at Men's Health. A publicist emailed me with an invitation…for my boss. Was I his secretary? No. This was insulting. But the email was intriguing. The publicist was inviting my boss to have dinner with Chris Bosh, who at the time had just left the Toronto Raptors and was heading to the Miami Heat. I'd been a Heat fan since childhood. So when I shared it with my boss, I said, "If you can't make it, I'd be happy to go!"

The publicist was displeased. I was just some kid, not the impressive magazine editor she'd hoped to score. But she was stuck, unable to rescind the invite. I went. 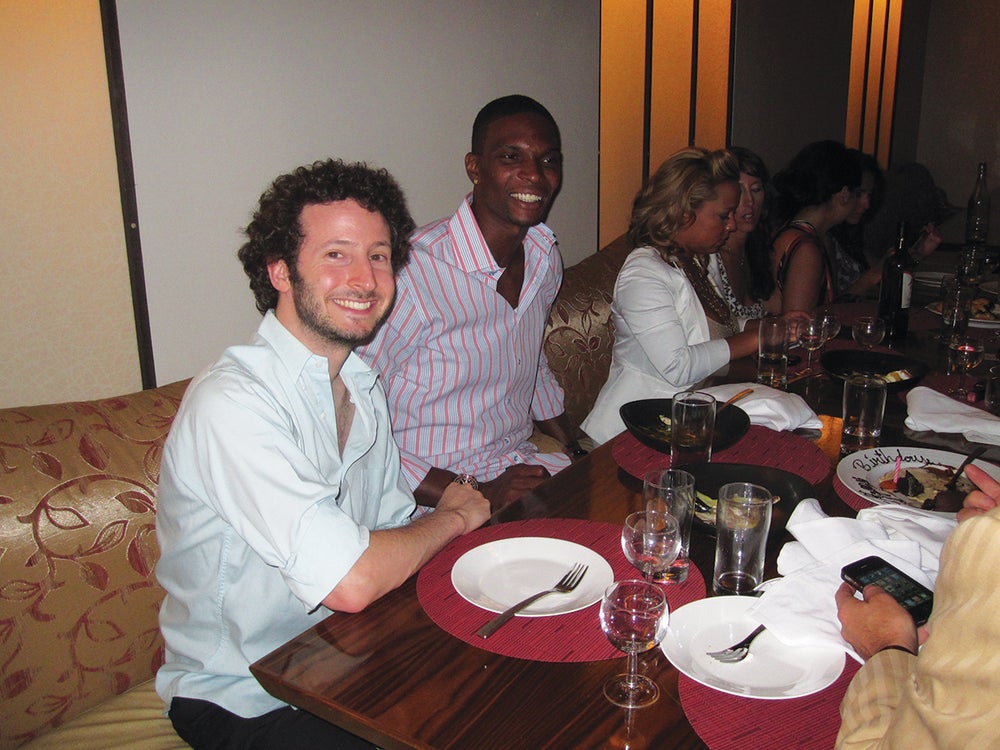 The dinner was at a fancy steakhouse in Manhattan. It was me; Chris; a major fashion designer; a major TV producer; Chris's then-fiancée (now wife), Adrienne; and some of her friends. I was deeply, comically out of place among these far wealthier, more successful people, who chatted about places I'd never seen and things I'd never afford. But I chimed in whenever I could, and everyone, Chris included, was gracious and welcoming. At the end of the dinner, we all agreed to stay in touch — though, of course, I never heard from any of them again.

Still, it was a career highlight. I felt like I'd snuck behind a secret door.

Life went on. Chris won two championships in Miami. I rose in magazines. Then Chris's basketball career ended abruptly in 2017 because of life-threatening blood clots. I interviewed him recently about life after basketball and began by reminding him of the dinner we had. When he realized I am now editor in chief of this brand, he said, "That's dope, man. Junior writer to the lead man. That's what's up."

That's exceptionally true. We work to be extraordinary. Along the way, we will feel out of place, struggle to grow, make hard decisions, and face massive setbacks — like Chris, who lost the career he'd worked his life to achieve. But this, too, is why we work: It's so we build a stable foundation, upon which we can be extraordinary in ways we may never have imagined.

After leaving the NBA, Chris read a lot of self-help books. They suggested doing what he loved, which is music and writing. "I just kept doing it," he told me. "Did it make sense at the time? No. It was very foggy. But I just continued. And I feel that in doing those things, and staying with it, things just started materializing." He ultimately wrote a beautiful book called Letters to a Young Athlete, which recently came out and is why I was speaking with him.

Like me back at that 2010 dinner, and like all of us at some point, Chris is now putting himself in new and uncomfortable situations. He also knows the purpose of it: When you work hard enough, you stop being the kid at the table who doesn't belong.