How a Business Emergency Plan Paid Off in Tornado-Struck Joplin, Mo.

By Diana Ransom
September 29, 2011
Opinions expressed by Entrepreneur contributors are their own.

Being prepared for a disaster -- natural or otherwise -- isn't just smart, it's good business.

On a Sunday afternoon in May, Meagan Snider and a co-worker at Freddy's Frozen Custard & Steakburgers were cleaning the oil out of the fryer when the hail started to fall. The wind began to blow so hard that it rattled the satellite dish on the roof. The reception on the TV in the restaurant blurred, but people watched on. The staffers even joked about the reception while intermittently running outside to see who could find the biggest piece of hail.

"That kind of weather is common in Joplin," says Snider, the Freddy's manager on duty that day. "Storms always go around us and we just get the tail end."

But when the reception fizzled completely, she realized that this storm was different. The guests in the store's dining room turned to their smart phones to check the Internet. One of the customers said it was a tornado. Snider's boyfriend called and confirmed that a tornado was indeed on its way -- and that he could see it. He lived five minutes from the store.

Quickly, she rounded up the roughly 15 customers in the Freddy's and eight employees -- asking everyone to take cover in the bathrooms, which were the only rooms in the building without windows. A family who had been turned away from another local business also took shelter in the restrooms. They heard the loud cracks of falling trees, crunching cars and howling winds. After an excruciating three-and-a-half minute wait, the noise had passed and Snider peered out of the bathroom to survey the conditions. 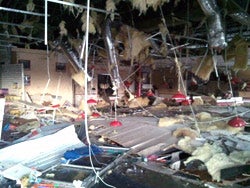 At the Joplin, Mo., Freddy's the roof caved in, windows burst and a wall from a nearby store whipped through the dining room.

"I opened the doors and I thought the whole town was gone," says Snider. The cars in the parking lot had disappeared, the windows were blown in and the store's roof had been ripped off in one section. "I was so heart broken," she adds. "I didn't know how to prepare anyone for what they were going to see. My jaw just dropped."

That day, Joplin got slammed by a storm that meteorologists call an EF5 multiple-vortex tornado, which is the strongest kind of tornado there is. Leaving little intact in its wake, the tornado claimed 162 lives and more than 8,000 homes and businesses. The Missouri Department of Insurance says insurance payouts could reach $2 billion. 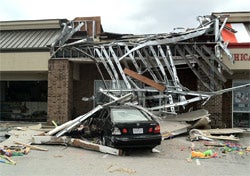 The cost to rebuild the Freddy's store and replace damaged equipment will run roughly $750,000.

Though the toll at Freddy's in Joplin was considerable, things could have been much worse. Fortunately, the store's owner Jason Ingermason took steps to prepare the business for emergency situations, and the staffers moved quickly to follow the store's disaster plan. Ingermason now plans to re-open his store by the middle of 2012.

Although every business owner will need to create a plan that's right for them, here are five steps that helped the Joplin Freddy's stave off the worst: