By Kathleen Davis
October 5, 2012
Opinions expressed by Entrepreneur contributors are their own.

Richard Branson is a rock star. Or at least he is to the crowd of business leaders and entrepreneurs at the 2012 World Business Forum. He took the stage at Radio City Music Hall on Wednesday to cheers and a hundreds of outstretched camera phones. Branson played to the crowd's enthusiasm by indulging in a Rockette-style chorus line kick with interviewer and angel investor Mark Thompson before starting the informal talk. 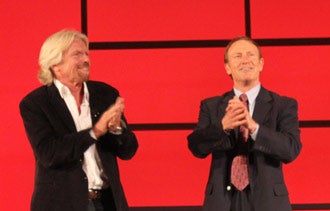 His belief that a happy team makes for a successful business starts with paying attention to all of the details that affect an employee's work. ″Being a good listener is absolutely critical to being a good leader,″ he explained, ″you have to listen to the people who are on the front line.″