Marketing to the 7 Deadly Sins

When it comes to recession-proof businesses, vice is nice.

Sin is in. It's not just a clever little rhyme, because sin is always in. That's what makes it one of those bulletproof commodities that no one ever talks about. And among all the little things we do to misbehave, there are seven transgressions deemed throughout the ages to be worse than the rest--the seven deadly sins: pride, lust, gluttony, greed, sloth, envy and wrath. They've been immortalized in classic art and in modern pop culture, and they're also great foundations for a successful business. Here's a look at seven businesses that are making good on helping people be bad. 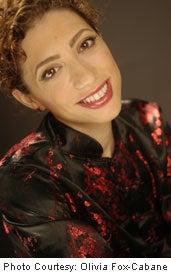 "Imagine a CEO, how much more powerful he becomes if you turbo charge his level of charisma," Fox-Cabane says. "He becomes more influential, more persuasive. What we look at is everything from the most minute items of body language to small items of appearance to a strategy of manipulation--the complete aspect of how to go from zero to trust in 30 seconds."

Fox-Cabane, 29, has applied her background in research and behavioral science to business, and it's paying off to the tune of $500,000 in revenue for this year. She's spoken at Harvard, Yale, MIT and even the United Nations. Executives spend entire weeks training with her in New York before important presentations. It's enough to make a person wonder why pride gets such a bad rap.

"Charisma is a very hot topic," Fox-Cabane says. "Because we all have this inherent desire to be magnetic, as soon as we hear that it's actually possible to learn this, there's a natural, instinctive, primal desire to want to get that." 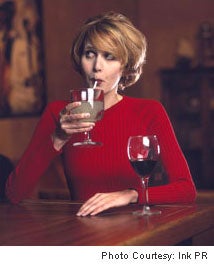 Is any sin easier to sell than lust? Not likely. But Amy Reiley's not taking any chances. She has a master's degree in gastronomy from the world-renowned Le Cordon Bleu culinary academy, where she became an expert in romantic foods and aphrodisiac cuisine. After starting out as a freelance journalist and then moving on to speaking engagements, she combined her knowledge and enthusiasm for food and sex in her 2006 book Fork Me, Spoon Me: The Sensual Cookbook and has been sought after as an expert in the field ever since.

"We need to eat and we need to have sex in order to survive," Reiley says. "It seemed like a smart idea for that reason. I just really wanted to get people more interested in food and wine and making more interesting choices. How better to excite people than to get them excited?"

Reiley's website, eatsomethingsexy.com, employs a stable of writers and works with up-and-coming culinary stars from Le Cordon Bleu's Los Angeles facility. She's also working on a new book as well as merchandising and television projects, and she's working with doctors to teach people how they can use proper nutrition to improve their sex lives and save money on expensive drugs in the process.

"People are never going to want to stop making themselves feel better," Reiley says. "What I do is cost-effective. I get to save people money and they have better sex. It's a good life." 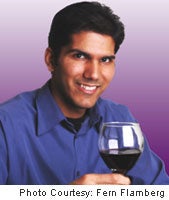 Do you know enough to know when you've had too much? Saurabh Abrol has 15 million reasons to hope not. That's how much his website,Winechateu.com, is projecting in wine sales for 2008.

"We pretty much market to anyone 21 years or older because we feel that even the younger generation is getting into drinking wine," Abrol says. "Wine just has a lot more to offer. We market to the bulk buyers and we still get people buying four or five cases of cheaper wine rather than buying a few bottles of expensive wine."

Abrol says about 25 percent of his customers choose to go the bulk route, a figure that jumps to around 35 percent toward the end of the year, when more people are entertaining friends and family at home. His biggest age market is the 35-65 set, most of whom are at a point in their lives where they've decided to settle down and really just enjoy drinking, something they're not likely to give up anytime soon.

Greed: The Luxury Marketing Council
What's the next best thing to being rich? Selling a product or service to people who are. And David Winter helps bring the two groups together as president of the Southern California chapter of the Luxury Marketing Council, a company that helps high-end businesses market to clients with at least $1 million in liquid assets--assets they are more than happy to part with for the right reasons.

The LMC was started in New York in 1994 and is now in 22 cities worldwide, with new chapters planned for Houston; Las Vegas; Austin, Texas; Philadelphia; Scottsdale, Ariz.; and Chicago by January of next year. It has more than 800 member companies, all of which pay average yearly dues of about $7,500. Winter says a big part of LMC's success comes from understanding what makes the ultra-wealthy tick and making them feel good about it.

"Wealthy people are unapologetic about the money they have," he says. "A vast majority of them are self-made. Perhaps they have run into some good luck. A lot of it is timing, and certainly there's a who-you-know aspect to it. But relatively few of them have inherited their money. Most of them have done it by working their bottoms off. Greed has a negative connotation. But the desire for the finer things in life does not necessarily make you greedy." 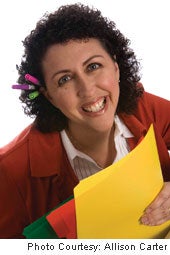 Sloth has come to be synonymous with laziness. But the original definition of sloth had much more to do with a person's underlying melancholy and the ensuing apathy. Allison Carter knows the difference--and she's turned that understanding into a business that gets her clients motivated and organized.

"There's always something better to do and there's always some reason not to do what needs to be done, even though it becomes pressing," she says. "Some people fall into trouble because they're in despair or sad or depressed. There are many people who are coming out of depression and they're ready to pick the pieces back up. That's what ends up being viewed as sloth. There's a perception that they're lazy. But there's always an underlying reason why they're not doing stuff."

Carter, 42, was a stay-at-home mom looking for something to do in 2002 when she discovered the market for professional organizational services. She markets mostly to fellow moms as well as creative types who are looking to get their businesses or hobbies under control. Her Atlanta-area business now includes an affiliate licensing program for those around the country who want to become organizers, as well as books and other products for sale. She says a big draw for her clients is not only the physical result of her service, but also the emotional weight that's inevitably lifted.

"People will pay anything to get rid of pain," Carter says. "You feel guilty that you're not a better role model for your kids. You feel guilty that your husband has to look at your stuff. You feel shame that you can't have people over to your house. Those are the types of things a professional organizer can solve with you so you can get over those pain points." 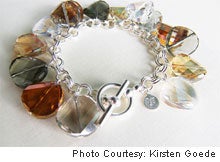 As the deadly sins go, envy might seem innocuous and indirect. But it eats at people and makes them do crazy things. When it comes to starting a fashion business, that sort of envy can be a powerful tool--powerful enough to inspire Kirsten Goede to turn her jewelry-making hobby into a business.

"It happens all the time with women," she says. "It's instinctual. You see something great that your friend has, and before you know it, you've blurted it out: 'Oh my God, where'd you get that?' That's what it is. It's that good kind of envy that inspires you to be better or more fashionable."

Goede spent 10 years as a graphic designer before deciding in 2004 to start Chicago-based Objets d'Envy. She had always made jewelry for fun, but when she saw people's reaction to her signature Rock Candy bracelet, she realized she might be able to sell it and her other designs to those who so often coveted after them. Her sales for this year will be double those of 2007, and her line is now featured in a Chicago-area Macy's as well as boutiques across the country. Her line has also been embraced by a few celebrities, something she says furthers a concept that's always been part of the fashion industry.

"Everybody knows about it, particularly in fashion, but nobody's spoken about it," Goede says. "But if you just look at the plethora of blogs about fashion, it's all based on that envy. It's the basis of a lot of shopping--that sense of envy. When you're looking for an outfit or style, when you boil it all down, it comes down to that little twinge of envy that you feel."

Wrath: uradeadbeat.com
If wrath itself were a business, it might not be seen as very viable--too much effort for too little return. But a business that helps other people harness their wrath? That's a whole other story--a story Adam Gordon, and his website, uradeadbeat.com, has taken it upon himself to write. 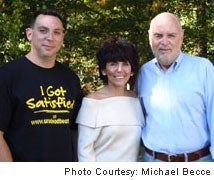 "People like to be heard," Gordon says. "If someone's angry and if someone's been done wrong, they want to be heard, and they want to go someplace that's going to have some punch. Even if someone doesn't get what they want as far as trying to get money or whatever it may be, the fact that they've been heard, it's satisfying."

Gordon's story begins 15 years ago at his father's graphic design business, where a client not only refused to pay, he closed his business and reopened under a new name in the same building. When a small-claims judgment still produced zilch, the Gordons figured that, at the very least, there must be other people out there who had been done wrong and who could benefit from a forum where they could warn other business owners and consumers. Enter uradeadbeat.com, where, for $9.99, people can file a claim on the site, which will send a postcard to the alleged deadbeat and give him an opportunity to respond. The site, which has only been in operation since September and is getting about 130,000 page views a month, also accepts claims against deadbeat parents and even politicians. Gordon says it's something that will allow people a little more satisfaction than they'd get from just speaking their minds.

"It's one thing if you talk among yourselves," he says. "It's another thing if you actually let the individual know or let the political party know or let the president know first-hand of what's going on. People are unhappy about the economy. Imagine if the White House now has 1,000 deadbeat cards coming to them. It might actually make them take notice. To me, it's better than a petition, because it keeps going. It's really just about getting satisfaction, whether it's just about venting or there's a resolution at the end of it all, that's the main focus of what our site's all about. Not just venting, but letting the deadbeat know that whatever happened, the individual's not letting go of it."