By John Arnold
May 11, 2011
Opinions expressed by Entrepreneur contributors are their own. 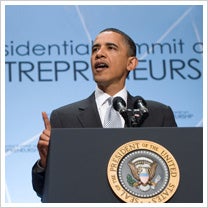 What do you get when you put White House staffers, entrepreneurs, small business owners and government officials in the same room? The answer is one of eight Startup America Roundtable discussions happening nation-wide through the month of May.

My startup-friendly hometown of Boulder, Colo., proudly hosted the seventh Startup America Roundtable discussion in support of the Obama administration's goal -- to give Congress a lesson in entrepreneurship using insights from high growth entrepreneurs.

Gathering ideas from high-growth entrepreneurs? Not a problem. Educating Congress? No small task, says Phil Weiser, senior advisor for Technology and Innovation at the White House Economic Council. According to Weiser, there are wide knowledge and experience gaps between Congressional process and entrepreneurial progress.

Knowledge gaps in the government may not be a surprise to entrepreneurs like you and me, but attending the meeting in person revealed several surprising and business-friendly attitudes among the White House panelists.

First of all, the White House team members seem perfectly willing to use their two ears and one mouth in proper proportion. After an introductory panel discussion, the attendees shared dozens of solid ideas for improving the entrepreneurial landscape. Ideas included getting rid of software patents, better access to funding and reduced paperwork for early-stage companies, eliminating the tax on sweat equity and visa reform to encourage innovators who come to the U.S. to stay and help domestic startups.

The White House team members took notes in order to prepare a report for President Obama, and extended invitations to continue the discussions and the flow of ideas after the roundtable. Don Graves, executive director of the President's Council on Jobs and Competitiveness shared his direct email address with everyone in the room, and high growth entrepreneurs everywhere are encouraged to post additional ideas here.

The White House is also pulling in real honest-to-goodness successful entrepreneurs for more focused advice and leadership. Among the participants in Boulder were Congressman Jared Polis, who built successful online businesses before running for congressional office, and venture capitalist Brad Feld, co-founder of TechStars.

The next step, according to Weiser, is a 120-day evaluation of the ideas and a summary report delivered to the President before the end of the year. Whether the gathering of ideas will have any significant impact on barriers to high-growth entrepreneurship in the near future remains debatable among the attendees in Boulder. The optimistic entrepreneurs feel that Startup America is a step in the right direction even if it's not the proximate cause of favorable reforms. The pessimists believe there is simply too much legislative history that would essentially have to be thrown away for significant change to occur.

The most important takeaway is to remember that the American system of government depends on input from smart people outside walls of the system. Regardless of whether you're an optimist or a pessimist when it comes to the relationship between government and entrepreneurship, the Obama administration has chosen to listen. To help ensure that listening turns into action, click here to get involved and periodically check up on the White House's progress.

Are you pessimistic or optimistic about the administration's listening tour and the Startup America initiative? Leave a comment and let us know.

- John Arnold is president of Aveta Marketing, a marketing agency in Boulder, Colo.