Learn how surf/skate label RVCA scores big by crafting a brand based on lifestyle. 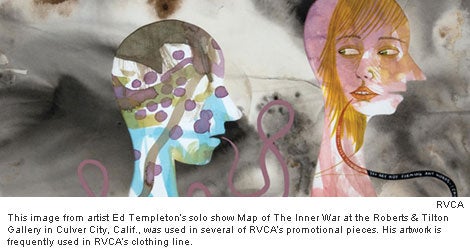 A box full of surf/skate label RVCA clothing lands on the driveway of artist Kevin Ancell's Bay Area, Calif., home. Within minutes, the kids and skaters raid it bare. The next round of walking, talking RVCA billboards has its message. Even when the invitation to grab the gear isn't overt, people seem to get their hands on the wide range of designs--everything from photo-quality graphics to urban art created by a global family of artists.

"I literally change out of a trunk at the beach and it'll be gone in minutes," says Ancell, taking a break from sketching his latest board design and lamenting how he can never find trunks or a tee adorned with his own design. "Girls take them and make them into skirts. They are that cool."

And the brand's appeal has moved beyond the surf/skate crowd that initially latched on to the apparel. Its edgy, artist-inspired designs are found on mothers and fathers, too. Maybe that's because it's more than a clothing brand.

RVCA's success as a lifestyle brand is due to a "melding of different subcultures and personalities into a tribe," says founder PM Tenore, 35. Those words sound like a mantra from a ླྀs commune, but in RVCA's case, somehow it works.

Tenore spent the early part of his life in a poverty-stricken area of the Mission District in San Francisco, raised by a single mother, and is no stranger to food stamps. But he wasn't long for that world, using his surf skills and business acumen to break out and find success.

By age 14, he earned a surfing sponsorship. A New York City-based designer couple found him at his sponsor's surf shop, plucked him off the beach, and transported him to their world of clothing design and art at Fashion Week in NYC and designer showcases in Paris. Before he turned 20, he opened his own boutique, and whether he knew it or not he was building the networks he would need to start RVCA. Even early on Tenore was a seasoned pro when it comes to the sports and clothes he's made into the basis for his business.

From $0 to $50 Million
Eight years ago for the more than 200 "advocates"--artists, musicians, models and other talent sponsored or otherwise part of the rising brand--RVCA didn't exist. But today the multimillion-dollar company fueled by surfers' dreams and maxed-out credit cards from Tenore's garage in 2001 is climbing toward the $50 million sales mark.

Tenore speaks of RVCA like a tangible being. "I wanted to do something other people in the industry weren't, and that is provide a space for artists, musicians, surfers, skaters, curators, models. That's when I started conceptualizing the artists network program (ANP)," Tenore says as he paces the hardwood floor of a tastefully decorated room in the 70,000-square-foot Costa Mesa, Calif., headquarters. ANP is RVCA's official name for the tribe.

He doesn't look like a guy who could nurture a company into a brand with near cult status--maybe it's the chonmage of abundant curly black hair that bobs with every movement--but he had a vision. "I saw artists and how they weren't getting the credit for their work, so I knew I wanted to create a platform for them." Once he knew what he wanted, he acted swiftly. From conjuring up the idea to forming RVCA took nine months. "It seemed kinda long because the concept of the artists network was already going. We were connected and working with charities . . . it's not so much a business as it is a lifestyle and a culture."

Essentially, his company takes conventional business wisdom--the kind that says be king of your niche, not Jack of All Trades--and smashes it to pieces, forming something entirely implausible from the splinters: a mishmash of Tenore's varied passions, no matter what they be, into a cohesive brand.

Recognizable names in action sports--skaters and surfers--artists of all mediums, and musicians like Matt Costa and Modest Mouse are all part of the tribe. While some are sponsored, dozens more are simply friends promoting the brand for free. But that young, hip vibe hasn't slowed down the apparel's movements.

The clothing travels easily from the posh shelves of vendors like Barneys and Bloomingdales, chic boutiques in Europe and tiny, independent surf/skate shops that dot America's shores to the backs of twentysomethings. The clothing appeals to all age ranges with its edgy, original artwork. It seems everyone these days, from movie stars to young skaters, are seeking clothing that sets them apart, and RVCA's limited edition T-shirts and trunks seemingly help them do that. Fans recently packed around a fighting cage in Las Vegas to watch RVCA-sponsored mixed martial artist and UFC champion BJ Penn take a pounding. They formed a quasi mosh pit billboard for RVCA.

Another way RVCA gets into the public eye is by supporting charities, which has been a set policy from the start, given Tenore's humble beginnings.

One such charity event was the Sea No Evil Benefit held last year at the Riverside Art Museum in the historical downtown area of Riverside, Calif. RVCA helped raise more than $50,000 to protect and preserve oceans around the world by sponsoring original artwork.

Against the Grain
We know that selling a lifestyle, especially when it manages to blend Southern California surfer cool with iconoclastic bohemianism, can be successful. But how often do you get a business that can turn a profit by producing a magazine, works of art, surf boards, skate gear, bicycles, and music; designing clothes from scratch; and sponsoring skaters, mixed martial artists, surfers, charity events and concerts around the globe? Precisely. Almost never.

Going against the mainstream idea of what a business should be, or do, is embraced, even in the brand's design: RVCA is pronounced Ruca but the "U" in RVCA is shaped like a "V" and the "A" is an inverted "V." These chevrons are often incorporated into various designs and promotions, and stand for the company's mantra: A balance of opposites. RVCA's own yin and yang. "It's a balance of industry and art," says Tenore, who claims creativity and commerce shouldn't be mutually exclusive.

Tenore's affinity for all things binary shine through every aspect of the business, starting with its headquarters. It's laid out like an airy, art gallery labyrinth. It houses a sound-proofed recording studio, designers' room filled with old sewing machines and fabric swatches, and apartments for night-owl artists, musicians and athletes. Rooms switch themes as quickly as an ADD-afflicted teenager surfs TV channels. In the design room, dozens of square-inch T-shirts offer a one-year glimpse into the future of RVCA's catalog. "These are T-shirts for January 2010," says RVCA officer Brad Blankinship, pointing at the mini designs. "We pretty much plan and design everything a year in advance."

While most of Tenore's advocates are no dilettantes--many are preeminent artists and well-known athletes in the action sports world--a big part of his business plan is about remaining cutting edge through the discovery and promotion of new talent.

"If I like someone's work, I may give them a contact list, or I may hook them up with a producer or bring them into the tribe," Tenore says. When they're brought on, limited-edition designs are produced with partial proceeds earmarked for a charity of the artist's choice.

Sixty-five full-time employees keep track of the advocates and their various contributions to RVCA in both its headquarters and first storefront, which has taken root on prime real estate at the corner of iconic Haight-Ashbury in San Francisco. A second store is slated to open in Los Angeles in April, with additional store openings planned in New York, Hawaii, Japan and Guam.

Its footprint may be growing, but it's not seeking to grow out of its niche. "I like where we are right now: not too big and not too small. But we also want to try to be everywhere," Tenore says. As part of its growth strategy, no additional accounts will be added to RVCA's distribution in 2009. At present, the brand is sold in 600 accounts in the U.S. and distributed in 28 countries world wide.

Kevin Ancell may not be able to get his hands on any of his own designs, but it's a good bet RVCA fans around the world have found them. Which leads one to believe that, contrary to popular belief, RVCA does have a business plan.