Editor's Note: This series takes a close-up look at the SBA's economic "clusters" designed to aid regional businesses. Read the previous installments on Minnesota, the Carolinas, California and Mississippi.

Home to the largest U.S. Naval Base on the West Coast, San Diego has also become a haven for startups with a military focus. The Small Business Administration decided to invest more than $1 million in the San Diego Advanced Defense Cluster as part of its pilot regional cluster initiative to promote small-business job growth.

The San Diego cluster provides education, training, consulting and other services to entrepreneurs developing advanced defense technology. In 2010 and 2011, the cluster received a total of $1.2 million in grants from the SBA, and is one of seven to be selected for additional funding beyond the two-year pilot, receiving another $385,000 in 2012, with an option to renew that grant for another four years.

The SBA's 2010 investment in 10 regional clusters was intended to increase opportunities for small-business participation within the clusters, as well as promote innovation and regional economic growth.

Among other things, the San Diego-based cluster used the SBA funding to help small-business members craft and write proposals and introduce them to government program managers to win business from Uncle Sam and its primary contractors, says Lou Kelly, the program director. The SBA grants have helped the cluster's small-business members win contracts valued at $53 million.

The cluster provides networking and mentoring support, consulting services, such as market analysis, and assistance with licensing agreements, intellectual property matters and exports, Kelly says. To qualify to work with the cluster's team of experts, entrepreneurs must undergo a competitive application process and meet with its leaders. "We have 7,000 entrepreneur small businesses that are trying to work in defense," Kelly says of the San Diego area, so the cluster must be highly selective.

The cluster's primary areas of focus are cyber-security, unmanned air vehicles and renewable energy, fields in which San Diego has become an innovation epicenter. Founded in 2001, the cluster has 26 partner organizations in San Diego ranging from law firms and federal agencies to business development organizations and angel investing groups. 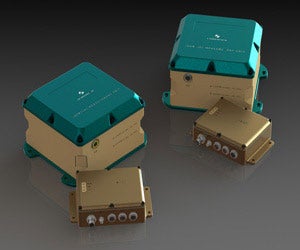 San Diego-based Geodetics made a small and light GPS that is accurate to the centimeter. With help from the cluster, the company won a contract to apply its positioning technology to unmanned air vehicles for the military.
Photo credit: Geodetics

Before the SBA funding came through to pump up small-business involvement, the cluster was serving as an innovation accelerator with the federal government. The government explains what it was looking for and the cluster seeks out an entrepreneurial business that can fill the need.

Small companies often need help from the cluster to learn how to sell their products and services to the U.S. military and its major contractors. Approaching the federal bureaucracy can seem daunting, but the cluster offers half-day workshops helping small businesses learn how to connect with the right government officials and how to pitch themselves most effectively.

For example, San Diego-based Geodetics succeeded in winning a $416,000 contract with a primary Defense Department contractor to apply its GPS technology to unmanned air vehicles thanks to "considerable mentoring" by the cluster staff, Kelly says. Whereas the GPS in your smartphone is likely to be accurate to several meters, Geodetics' positioning technology is accurate to the centimeter.

ATA Engineering, a small firm that worked with NASA in the landing of the Curiosity on Mars, also received help from the San Diego cluster. It won a $750,000 contract from NAVAIR, the aviation division of the Navy, to reduce jet engine noise, Kelly says. ATA Engineering was struggling to pass a defense contracting audit, and cluster mentors helped shepherd it through the audit so it could move on to win the contract.

For both Geodetics and ATA Engineering, the cluster's help was a direct result of the SBA grant money, Kelly says.

Here's the Simple, Winning Strategy You Need to Build a High-Performing Team

Want to form a solid team that will work hard to promote the business' success? Here's what you need to do.