A virtual roundtable discussion with three architects behind the recent, revealing "Diversity in U.S. Startups" report.

The most stunning, but in many ways least surprising, data to emerge on small-business culture so far this year was collected within RateMyInvestor and Diversity VC's second "Diversity in U.S. Startups" report. A statement that accompanied its release explained its methodology, which involved scrutinizing and parsing through "the top 100 U.S. VC firms by deal activity (which accounted for $68B in funding), the 3,304 companies they invested in and the 7,705 founders at the helm of those companies" for the years 2018-2019 (the previous report spanned 2013-2017).

The good news? This is, believe it or not, an incremental improvement over the several years prior. The bad news? Well, it should be self-evident. 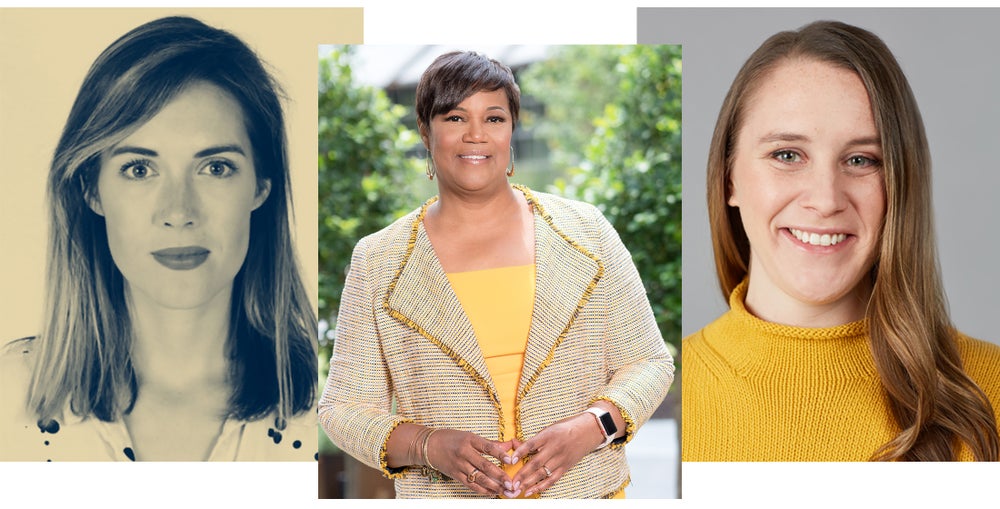 But rather than dwell on the sobering statistics, we sought out three individuals intimately involved with amassing and publicizing the new report — Aisling Carlson, strategic advisor at RateMyInvestor; Sarah Millar, principal at City Light Capital and part of the Diversity VC team; and Shila Nieves Burney, founder and managing partner at Zane Ventures — for a virtual roundtable of sorts. The three women discussed what these numbers bear out, why they don't indicate greater gains in inclusion both in funding and hiring, and what everyone is missing out on when money (of which there is plenty) and opportunity aren't equitably spread around.

How do we, as a culture, get these numbers to look more equitable in future reports?

Carlson: That is a good question. It's one thing to collect this data and to analyze it and to put it out into the world. There is value in that. It's important to track progress and to set meaningful goals. For companies that want to make meaningful change, publicly announcing and releasing their own internal stats around how they hire is a way to keep themselves accountable in the eyes of the world.

Nieves Burney: Seeing the data was heartbreaking, because we're doing all this work to show there is no talent problem, right? There is no pipeline problem, as much as people want to say that. Having this sort of data, we use it in our meetings with limited partners to say, "Hey, this is a problem, but you can help solve that." Until limited partners are [saying] to whoever they're funding, "Show me your diversity numbers. Tell me how you're going about making sure you have a really diverse portfolio," nothing's going to happen. Are you looking at all the opportunities out there? Are you still looking at one particular [type], which is the white male entrepreneur?

I'm talking to a financial institution now about funding. I'm a diverse woman, and they're saying to me, "We want to make sure you invest in diverse entrepreneurs." They didn't want us to split the pie any sort of way, but they wanted to make sure that that was top of mind for us. And if other institutions start saying this to funders, we'll definitely see a change.

Short of mandates around diversity and equity, what can be done so these efforts feel, essentially, mandatory?

Nieves Burney: That's why it's fundamental that folks like me get funded. I got one of my deals because one entrepreneur said he was looking for a diverse funder. I was on a panel, and someone said they had gotten some commits from some investors, but none of them were diverse, and they were looking for someone diverse. If all of these folks start getting funded and getting the best deals, I think there will be a change in narrative. We just got our first Black unicorn here in the Southeast. No one could fathom that in Atlanta. It was Calendly. And there's so much ripe talent here. Once people start seeing folks like Calendly roll out, they'll start to think, "Well, there is not a pipeline problem. Here's companies I can invest in led by Black and brown entrepreneurs."

Carlson: There's something very interesting around having diverse investors and the sort of virtuous circle that creates in terms of attracting more diverse founders.

In terms of not having a mandate, we have a Diversity VC standard that we are trying to make the standard for the industry. One of the interesting things about venture capital in particular is you brag about the companies that you're in. It's not like we're not transparent about who we've invested in. It's just the data isn't collected and reported on the diversity of those investments. If everybody did that, we would be probably in a different situation, but it's not like I can't go to your website and look at all of the founders of your companies and say, "Hmm. All of these things look like the others." And I'll be totally blunt: The Diversity VC standard is setting a low bar. It's do you have the right policies in place? And so if you can't even reach that, maybe somebody shouldn't be investing in you. It needs to be demanded from the LP community to say, "This is the line that we're drawing."

Does this mirror our body politic in a way, where some populations feel existentially threatened by the advances other populations are making? Are the traditional gatekeepers panicking that they'll be left out in the push for inclusion?

Nieves Burney: Why does anybody have to be ostracized? Just because one group has not had access to this particular asset class doesn't diminish others out there who can also have that. There's so much money in the market. We talk about like, "Well, the Black and brown entrepreneurs get funded and nobody else will. But that's not the case. Everybody can get funded if they wanted to, if we paid attention to it. I don't think one group being elevated diminishes the other, and that's not a narrative I ever want to play out. As a country right now, we're looking at a new majority entrepreneur. They just happen not to be white men. They're women, they're Black folks, they're Latin folks, they're Asian. We asked for a melting pot — we got it. So we talk about capital, we're not going to innovate around making sure other folks get capital. That's the law. We've been traditionally left out, and so once we were let in that doesn't mean other people can't stay there.

Carlson: Yeah, it's not about taking the pie from someone else. It's about how do you have a bigger pie?

Millar: To put it in terms of [venture capital], we look for massive markets. We're looking for people who are creating new markets; they're taking a slice of this [pie] and then making it into its own pie.

Related: Black Women Entrepreneurs, Not Banks, Helped Me Keep My Company Going During the Pandemic

Carlson: Kenny, you're right. Right now, if the question is whether there is a threat to the college white-male graduate and his position of dominance in receiving funding, the answer from the data is no. He still continues to top the pyramid, but there has been change. It's definitely not at the pace that anyone thinks is acceptable.

Nieves Burney: It's about equitable opportunity. Give me that opportunity and let me see what I can do with it. But totally being shut out of it, not knowing what I could possibly do — that's the barrier we're trying to break. We're not saying, "Oh, everybody gets a check." To Sarah's point, we're looking for those who have a big market. We're looking for a whole lot of things before we make that investment into an entrepreneur, no matter who they are.

I'm not looking for an "only" team. I mean, I'll invest in an all-woman team. I'll invest in an all-Black team. But we're talking about true diversity, where white men are actually a part of that. If I have a deal coming out of the Midwest, it would be great to have someone from the Midwest speaking to them. That's what you call diversity of thought, diversity of lived experience. Diversity is not just about race and gender. LGBTQ is another important group, and they're white and black and all kind of colors. My thing is it's just about opportunity and access — true diversity.

Millar: I want to take a slightly more cynical view to that, because we could give everybody the same access tomorrow, like just as many meetings for Black entrepreneurs and white entrepreneurs or LGBTQ entrepreneurs. There is so much work to still be done on the part of VCs. The amount of code switching that has to go on for Black entrepreneurs when they walk into a white VC's office and the doubt that inherently exists in a white VC's mind about the size of a market for a Black consumer — there are still a lot of things that are going to prevent traditional VCs from writing checks to people who don't look like them and don't talk like them. And that's a misunderstanding on their part, because they're missing opportunities.

It seems like anyone involved in funding entrepreneurs has nothing to lose and everything to gain by simply taking as many meetings with as many people as possible, period.

You mentioned all the different groups deserving of the proverbial seat at the table. How crucial is it for some of those groups to empower each other rather than strive for inclusion from separate silos?

Millar: It's like what Shila said before. Each silo, if that's what we call it, shouldn't think there's one slot for a diverse person, and it's either going to be a woman or a Black person or an Asian American. Be supportive of each other. It's not even that this is everybody against the white man, but everybody should be supportive of each other and recognize that if we do this as a cohort or coalition, we get a lot further than feeling competitive and feeling like, "If it's not me, then it can't be anybody else."

Carlson: To this point, one of the things for our future reports we might address in more detail is around intersectionality; how a person's social and political identities are sort of interweaved and can create different kinds of discrimination or different kinds of privilege. People understand this term intersectionality now in a way that I think even a few years ago, it wasn't common verbiage.

Nieves Burney: My venture partner is an older white man. He saw how diversity was rising up, and he decided he was going to pivot and start making some moves that way. He put his reputation on the line by coming on as my venture partner, but he's a venture partner because he has his own fund, and then the rest of our team are completely diverse. Folks who are leading organizations should look around, and if everybody is looking like you, you should understand you've got a problem. I'm a Black Latina, but I didn't grow up with a Latina experience, so I can't talk for a Latino or the Latinx community. I can only talk from Black woman's perspective and my lived experience. We're all in this together. I depend on my VC partners, because if they have a deal, I want to know about that and might want to get in on it. The firms that want to be collaborative with each other will be collaborative, and we will all invest in great deals and all have great returns.