Young entrepreneurs are banking on their tech savvy for startup success.

By Alexa Vaughn
March 24, 2008
Opinions expressed by Entrepreneur contributors are their own. 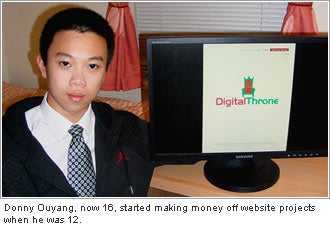 Four years ago, Donny Ouyang cracked open one of his dad's old computer science books and began learning HTML code and website techniques. This accidental discovery grew into a great entrepreneurial opportunity when he sold his first website less than a year later.

Now 16, Ouyang is making more than $6,500 a month as CEO of Kinkarso Tech--all while playing basketball, piano and guitar in high school. That's because his business has advanced into SEO consulting and "flipping" unwanted websites--that is, revamping and reselling sites for profit.

But Ouyang isn't alone. Six in every 10 teens want to be an entrepreneur, and they can start e-businesses with little or no capital.

Caught in a Web of Advantages

"This trend of more teen businesses has a lot to do with the internet giving easier access to the resources they need to develop their business ideas," says William Walstad, an economics professor at the University of Nebraska, Lincoln. A long-time advocate of youth entrepreneurial training in schools, Walstad is the author of The Entrepreneur in Youth: An Untapped Resource for Economic Growth, Social Entrepreneurship, and Education.

"Today's teens are more tech-savvy and, as a consequence, are at an advantage when it comes to finding those startup resources."

And because online social networks like Facebook and MySpace and other technologies have become so integrated into teens' lives, many discover big online business ideas before seasoned entrepreneurs do. 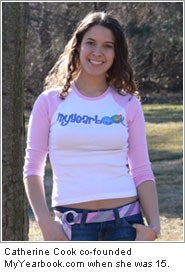 "Young people have great advantages in business, especially when marketing to their peers, because they relate to their demographic better," says Catherine Cook, who co-founded social networking site MyYearbook.com when she was 15. "You can't expect someone who's 40 years old to know what to do."

That's why Cook thinks investors at U.S. Venture Partners and First Round Capital loaned her company a combined $4.1 million during its first year of development. Investors, however, need a lot more than a business idea to bet on a teen business' success, as both Cook and Ouyang know.

"The bank gave me an investment loan because I already had a good record for getting business online," Ouyang says, noting the $25,000 investment that allowed him to grow his business significantly. "I hadn't formed my company yet, but I had a network of customers and the business proposal was there. For the website project I was trying to get capital for, I already had traffic, revenue and proof that it was a unique idea that worked."

But some teen businesses grow to international proportions without investments like the ones Cook and Ouyang acquired.

Simple website building skills and a will to unlock his new iPhone for any mobile phone carrier are what started 15-year-old Kyle Jourdan, creator of FreeIt4Less.com, on an unexpected entrepreneurial adventure.

Before Apple opened the iPhone to carriers besides AT&T, Jourdan purchased a few licenses that gave him permission to use an unlocked iPhone. He sold extra licenses on eBay, and they went surprisingly fast to customers from all over the world.

"We opened up the iPhone to people around the world because AT&T is only available in the U.S.," Jourdan says. "So we ended up selling licenses to people in over 150 countries."

After starting the business last September, Jourdan adapted his business model according to the iPhone's software updates. Now he's selling the actual unlocked iPhone on his website.

Jourdan knows that as iPhone's software issues diminish, so will the profits of his business--but he's not worried. He's already made enough money to open a restaurant franchise someday in his hometown of Syracuse, Utah.

Benefits Beyond the Tech Know-How

Besides being tech-savvy, teens have other inherent advantages when starting a business. One, Cook says, is that there is less overall risk.

"You don't have to worry about losing your home or paying any other huge bills as long as you're living at home," Cook says. "The worst thing that could happen if you try to start a business as a teen is that you fail."

Another huge benefit of being a teen running a business is that it's an attractive story for local and national news. Cook, for instance, has been interviewed by CosmoGirl and MTV as well as national newspapers and news shows. Her story also spiced up her application to Georgetown University, where she currently studies business while running her business. Cook considers being a teen as so advantageous, that she's afraid of being so old now--18.

It took Ouyang a little longer to admit his real age to clients (who thought he was 23 for the first three years). But after building a solid reputation through his business, he finally admitted he was 16.

"I only lost one customer after I revealed my age, but most people were just impressed," Ouyang says.