China's gender imbalance -- 30 million more men than women -- is the reason why being single and older than 27 has become a social crisis.

Most Americans are aware of China's one-child policy, the population-control rule that from 1979 to 2013 sharply limited the number of Chinese births. Less well known outside China is an offshoot campaign currently being run by the government that targets and shames sheng nu (leftover women) for the "crime" of being an unmarried educated professional woman older than 27.

Due to its one-child policy, China today has 30 million more men than women of marriageable age. The government views this gender imbalance as a threat to the social order. In an interview with Entrepreneur, the filmmakers detailed its effects. "One side effect is women trafficking," said Shosh Shlam. "Another side effect is that more men will not have the traditional role of head of the family," meaning the opportunity to father children and continue the family name. The government, Shlam said, fears that a glut of unmarried men could cause violence or, worse, that these men might "turn" gay -- which is illegal in China and subject to harsh penalties.

"When these women [from China's educated class] are growing up, they have a lot of pressure to succeed -- to be the best in their class," said Hilla Medalia. "And their parents really push; the whole society pushes them to succeed and go to university. Then they start their career. But then they have to stop everything and get married. Their entire value is based on this one thing." 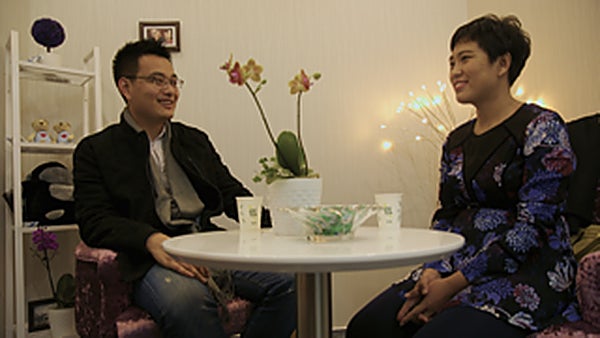 Qiu Hua Mei, age 34, is a lawyer who faces an uphill battle for finding an educated mate given her (socially lower) rural village roots. She is cruelly criticized by her family ("Schooling makes you dumb," her illiterate father says, expressing regret for having paid her university tuition). In another disturbing scene, a dating counselor tells her, "You're not beautiful in the traditional sense. You have a tough personality and need to soften yourself." A prospective match, meanwhile, who's similarly well educated and similarly from a rural village, announces that once he marries, he intends to be the "dominant" spouse.

Xu Min, 28, is a radio talk show host who lives with an overbearing mother who tells her, "You're not old. You're not a "leftover woman' yet."

Gai Qi, 36, is an assistant professor of film. She does marry and has a daughter during the course of the film, with a husband the filmmakers call "extraordinary" for his social faux pas -- marrying a woman older than himself -- and for his willingness to follow her to a better job in Guangzhou.

Over the span of three years, Hua Mei and Xu Min are individually followed by cameras as they attend a massive government-sponsored "annual blind date event," check out a Valentine's Day dating party and visit a gynecologist's office (where Hua Mei is told it's illegal to freeze her eggs). Then there's the "relationship expert" Xu Min consults, who ends up delving deeply into her emotions. Breaking into tears, she admits that she is so obedient to her mother, she can't actually date a man her mom dislikes.

A happier note is the joyful wedding of Gai Qi, who tells the filmmakers she was so worried her marriage might threaten her career that, "I was not planning on a happy ending." That happy ending, however, is short-lived; later in the film, Gai Qi admits she finds marriage boring.

Hua Mei, meanwhile, is the polar opposite. She wants to date, but not marry, she tells her parents back home in their impoverished village. But, after months of sitting alone in desolate bars and getting the third degree from mothers of sons in public parks advertising their sons' eligibility, Hua Mei gives up: She abandons her home country altogether to study in far-off France: "There are voices all around me," she tells the filmmakers. "I want to have a life without those voices, just to live my life.

"I could live a wonderful life," Hua Mei continues. "All this [grief occurs] because I'm not getting married. I live in a constant fight, a life of exile." She even compares sheng nu to China's infamous practice of foot-binding: "I have big feet," she sighs, describing herself and her ambition, borne out by the fact that she has recently moved to Munich to start a business.