She Chose Tattoos Over Traditional Success. Why Katrina Ruth Refuses to Be Anything But Herself.

"I know I'm not for everyone. But if you aren't yourself, you'll just blend in."

June 5, 2019
Opinions expressed by Entrepreneur contributors are their own.

Too loud. Too intense. Too much. All these terms and more have been used to describe Katrina Ruth.

She's been a redhead and a platinum blonde, has a "sleeve" tattoo on her arm, and her personal style is less than subtle. Looking at Ruth, you wouldn't believe the confident success coach used to be a nerd with an eating disorder. Listening to her may make you doubt it even more. "F-ck you, I won't do what you tell me," begins one of her Facebook posts. The Rage Against the Machine lyrics reflect her approach to life.

She's been rejected by fellow entrepreneurs; has walked away from her life, twice; survived a potentially life-threatening medical condition; and recovered from a six-figure debt — which she accumulated while making five figures a month.

Now the Melbourne, Australia, native runs a multiple-million-dollar empire, empowering others to follow their soul, share their message, and break the rules — just like she does.

Born Katrina Ruth Gregory, she was a shy child who always sought approval from adults. There was no cursing in her Christian family.

Ruth excelled in school and went on to university to study law — which lasted about a week. "I was sitting in class with 400 others and realized no one was going to recognize me for doing well. I had no motivation."

She quit college and traveled around Europe, gaining some weight along the way. When she returned, Ruth started going to the gym and eventually got a job as a personal trainer.

That was the beginning of a 13-year fitness career. At age 22, she met her first husband at the gym, and they married three years later. Life was good as she climbed the ranks at Australia's largest health club chain. Then the quarter-life crisis hit.

"I wasn't happy, and I wasn't successful like I was "supposed' to be," says Ruth. "I always knew I was different and had a message to share. I grew up being told I could do whatever I wanted in life, so I just thought it would happen. Then I realized it wouldn't unless I made it happen. I was about to accidentally create the wrong life."

Starting over — the first time.

At 26, Ruth walked away from her life, leaving her marriage, her management job, and her home to start over.

She continued working as a trainer, began blogging, and built an online fitness coaching business. She angered some of her peers when she contradicted the food pyramid and other industry standards, but her honesty attracted a following. "A lot of people thought I was a troublemaker because I wasn't sticking to the script, but I was just telling the truth."

Ruth also met her second husband, Enzo Loterzo, at a gym. After several years of dating, they talked about marriage but decided to have a baby first.

Their daughter, Alyssa, was born in 2009, and the couple eloped 10 months later. Rather than go back to training others, she decided to focus on her blog full time, under the name Kat Loterzo. As her online honesty continued, she held onto one secret.

The disease of the driven woman.

"I started binge eating when I was 19. I read that some girls make themselves throw up, so I tried it."

Ruth developed bulimia that would last over a decade. "On the outside, I was successful and happy. Inside, my life revolved around binge eating and throwing up afterward. 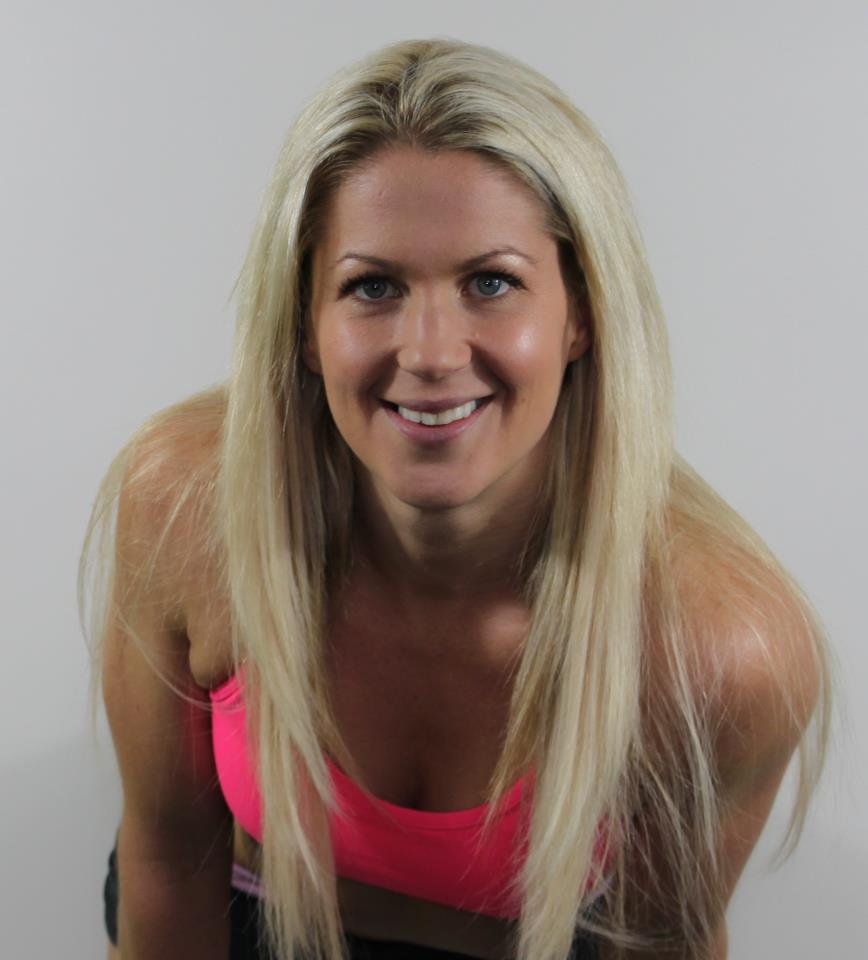 Ruth developed an eating disorder that would last over a decade.
Image Credit: Courtesy of Katrina Ruth

"I'd laugh when the girl at the grocery checkout jokingly asked, "Is this all for you?' As I light-heartedly told her I was having a party, I wondered what it would be like to tell the truth — that I'd eat most of it myself in the next two hours."

Working in the fitness industry perpetuated the guilt that came with the eating disorder. "My clients were successful, professional women, and many had the same problem. It's almost like bulimia is the disease of the driven woman, a way to alleviate the pressure we put on ourselves. 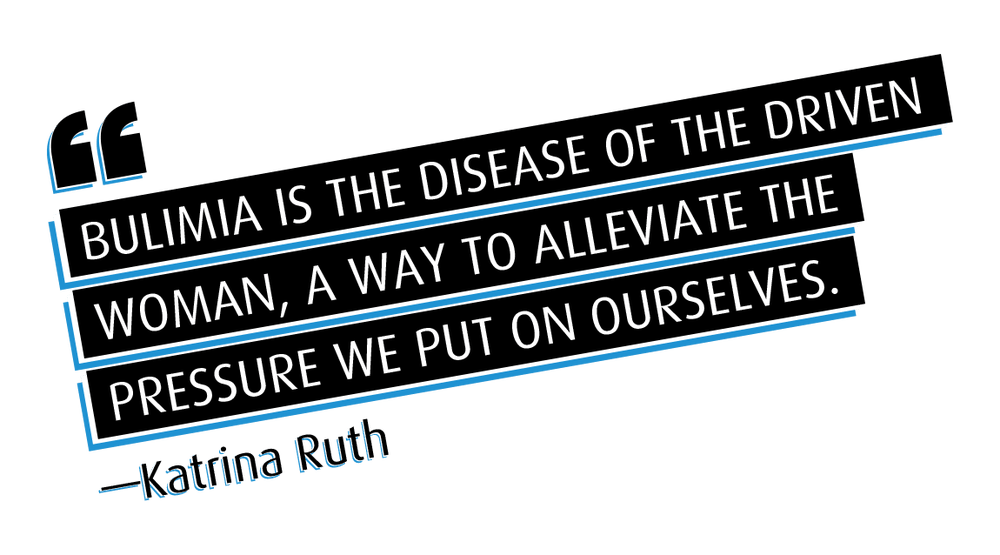 "I remember one client crying as she said to me, "Kat, I wish you could understand how it feels.' I wanted to crawl under the table. I had to tell the truth. When I blogged about my story, I thought it was the end of my business. I was a fitness expert! But I received dozens of messages from women thanking me."

Reading her honest account of what it was like, one can see why. "I'm pissed off at myself. That really was the last time," she wrote. "I feel disgusting."

Ruth warned readers that the post contained explicit language, which was new for her. Things change when you become yourself.

In 2011, Ruth released her first of over 50 ebooks, "The Secret Life of a Binge Eater," which remains her number-one bestseller. As she grew her online business, she became a sales and marketing coach.

One day in 2013, she realized that although she was making $30,000 a month, she was almost $150,000 in debt. She was investing everything back into business development, was using a credit card, and wasn't paying taxes or student debt.

But the worst was yet to come that year. While pregnant with her second child, Nathan, she developed a rare condition where the placenta became attached to her bladder. "I was told I could die in childbirth. If I didn't, I might need a hysterectomy and could lose my bladder.

"But I refused to believe that was my story. I started focusing on myself, doing kinesiology, journaling, and manifesting that everything would be okay."

When the top obstetrician flew in, he thought he had the wrong patient. The condition was gone. "You could see it on the scans — and then you couldn't. There was no medical explanation. It's my best manifestation story," she says. 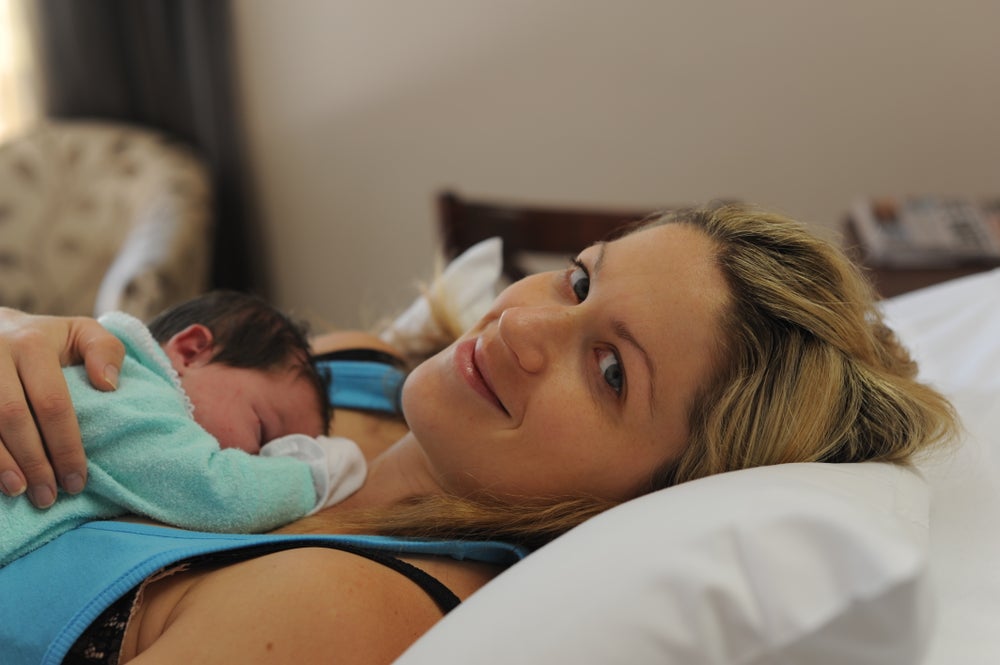 Ruth was told she could die in childbirth, but she refused to believe that that was her story.
Image Credit: Courtesy of Katrina Ruth

There's nothing like a life-threatening experience to gain perspective. "I was making a lot of money, but not doing my soul work. I'd been trying to keep my head above water until the baby was born, but about two weeks after Nathan came, I realized I couldn't bear it anymore.

"I wanted to empower others to follow their purpose," says Ruth. "But I thought I wasn't good enough. I realized I was never going to feel "ready' to put myself out there. There was no one in the way but me."

She decided to start a boot camp to help others find success, but she was broke. "At one point, I only had 89 cents in the bank. I never knew if my card would go through at the grocery store. Oftentimes, it didn't." 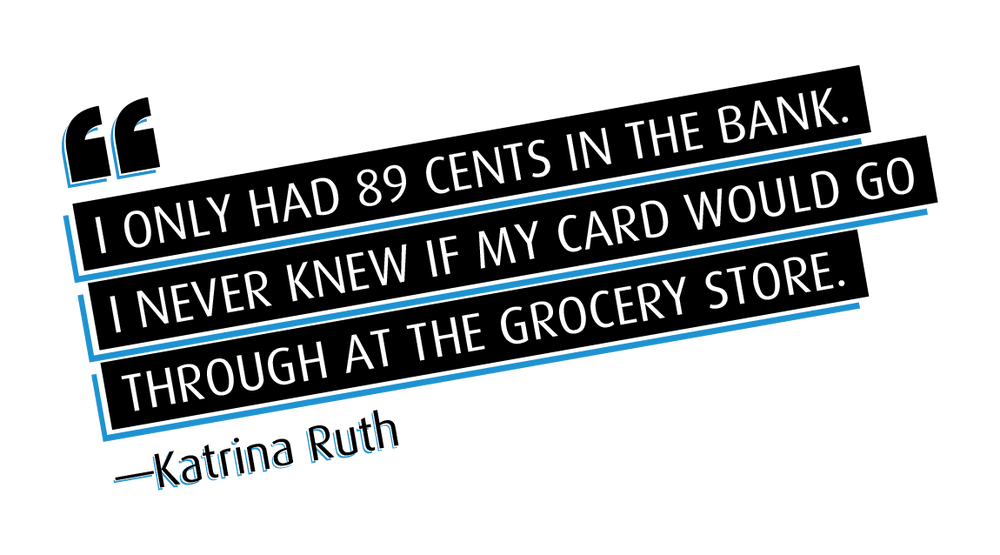 After years of fighting, Ruth had finally fixed her relationship with food. "I'd broken free of bulimia before, but I relapsed regularly and it was an ongoing battle not to do it. That battle finally disappeared." But not all her battles were over.

A one-way ticket from debt to destiny.

After six months of living cent to cent, she convinced her husband to take a sabbatical. She bought one-way tickets to Germany so they could travel with the kids while she worked remotely on her online consulting business. "I only had a few hundred dollars left after buying those tickets."

While she was scared, Ruth didn't feel reckless. "I created that pressure because I believed I would make magic. It was about backing myself. I couldn't listen to my excuses or fears anymore. I would prove that I had what it takes or that I didn't."

Her bet paid off. Ruth soon began earning $50,000 a month in Munich. Today, she makes multiple seven figures a year counseling others to be their best selves.

"Some think you can follow your purpose on the side, but in my clients' experience, that won't work. You can't do it a little. You're either in or out."

Ruth and her family traveled through Europe, Asia, and the United States until 2016, when she and Enzo separated. "I'm all about personal development and growth in my business, but I neglected it in my past relationships," admits Ruth. She adds that she and Enzo have a solid co-parenting relationship now. They both live in Gold Coast, Australia. 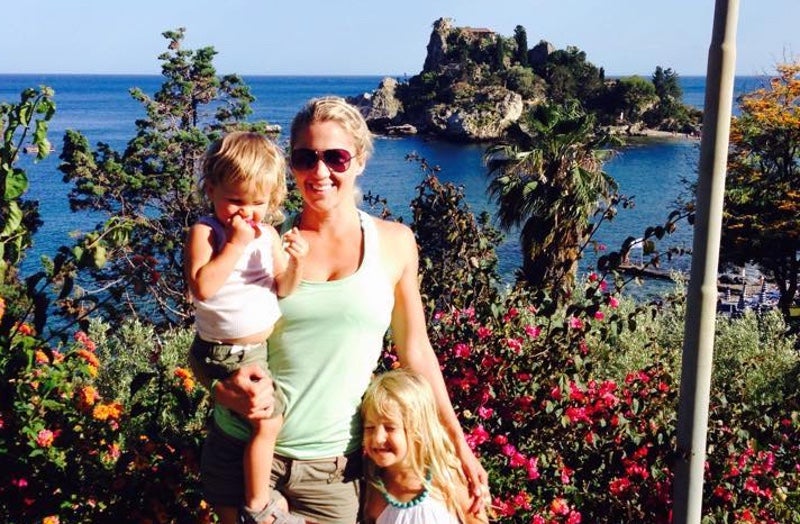 Ruth and her family traveled the world for several years before settling in Gold Coast, Australia.
Image Credit: Courtesy of Katrina Ruth

Getting kicked out of the club.

Ruth doesn't just take risks in her life; she continuously bares her soul online as well. For example, she writes about realizing those in her mastermind group were frustrated that she didn't run her business how they thought she should.

"Abruptly, the mastermind closed down," she writes. "I just had this lurking feeling that it actually wasn't over, but rather that it had been re-formed, with a few troublemakers (hi!) kicked out.

"Well, about four years later," she continued, "I found that that is precisely what happened."

Ruth admits that rejection is still upsetting. But she says she's always felt like a black sheep, long before she started expressing herself more with her tattoos in 2017. In fact, she envisioned the intricate artwork that runs down her left arm, side, back, and torso for a decade. "They were always inside me, I was just scared to bring them out." They include a falling harlequin mask, which represents what happened when she started being true to herself. 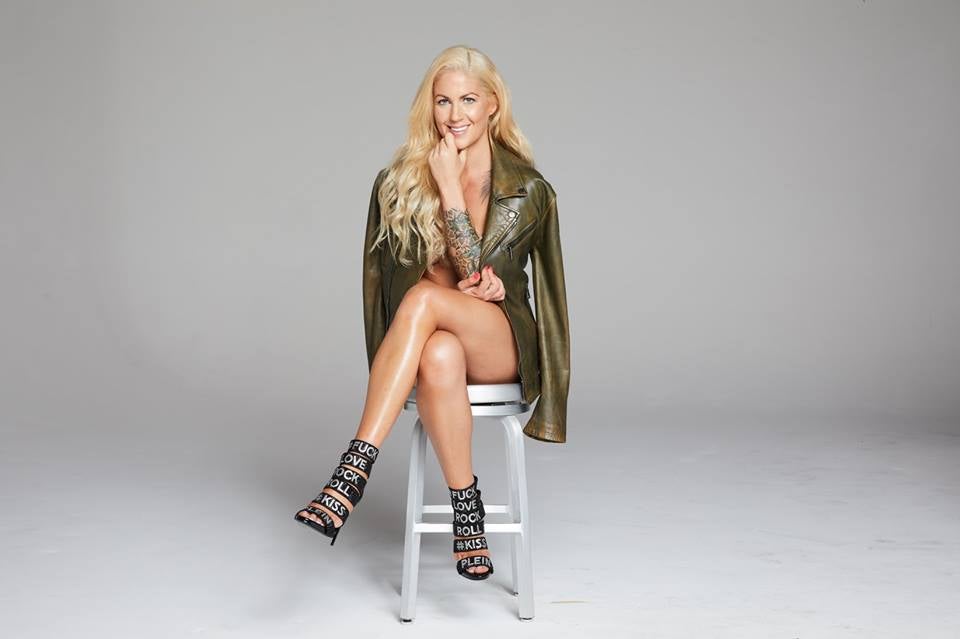 Ruth forfeited the chance for a lucrative offer because she refused to conform.
Image Credit: Courtesy of Katrina Ruth

Earlier that year, Ruth says an agent in the U.S. signed her to pursue a book deal, TV show, and a potential partnership with a Fortune 100 company. "They all agreed I could be myself, cursing and all. But I didn't have the tattoos yet.

"When I decided to get tattoos, my agent strongly told me not to. I questioned myself for weeks, but we finally parted ways and I forfeited the potential deal. It cost me a lot of money, but I refused to achieve my goals by conforming."

Ruth says people perceive her a certain way because of how she looks and acts, and she still struggles with wanting others to like her. "Sometimes people's comments get to me and I wonder if I'm being too much. But being you means letting out all the crazy sides of yourself. If you aren't fully yourself, the right people will never notice you; you'll just blend in." 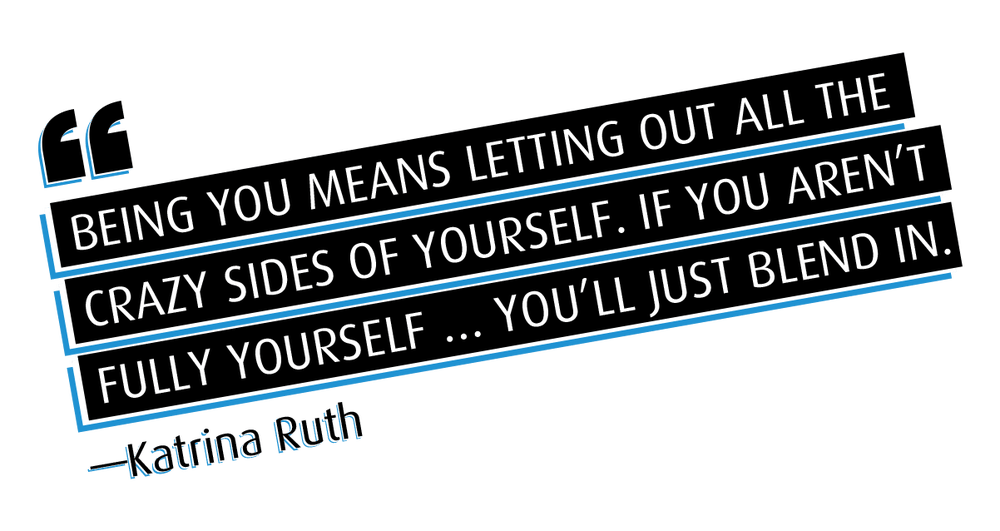 Katrina Ruth certainly doesn't blend in. She also doesn't do sales calls — because she doesn't have to. "My clients sign up with me online, no conversation necessary. I'm the person who says what they think."

Today, she's helped thousands of entrepreneurs find their soul work like she did. Her latest tattoo says it best: "When I say yes to soul, life says yes to me."