Film icon and entrepreneur Robert Redford advocates the value of artists in the business world.

By Andrea K. Hammer
July 21, 2010
Opinions expressed by Entrepreneur contributors are their own. 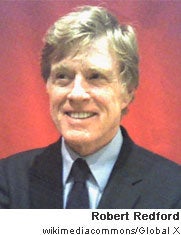 Sundance Institute and Film Festival founder Robert Redford believes passionately in the presence of artists at the business table.

During a recent presentation at the Suzanne Roberts Theatre in Philadelphia titled "Cultivating a Creative Workforce," the Oscar-winning actor, director and producer openly discussed the challenging path he followed as an artist developing a business.

"First of all, I think artists help tell the story you want to tell," Redford explained to moderator Robert L. Lynch, president and CEO of Americans for the Arts. Lynch has expanded the national organization--dedicated to advancing arts and arts education--to 50 times its original size since 1985.

Now celebrating its 50th anniversary with Redford as chair, Americans for the Arts has also co-convened the National Arts Policy Roundtable at Sundance since 2006. During these sessions, a coalition of arts and business leaders meet to discuss issues and then take action.

"Talk is just talk after a while. It has to move into some action," Redford said while chatting with Lynch in two cushioned chairs by a table at center stage.

With increasing animation, he recalled several conferences at Sundance when different groups spoke their own language and remained entrenched in their own positions. But after a member of Youth Speaks honestly expressed his concerns about global warming at a mayor's conference, Redford said that the previously stiff conversation finally came alive. Redford described how, at another conflict-resolution conference with business leaders and environmentalists, a drawing helped to communicate the issues at stake and lead to a resolution.

"The creative aspects of art applied to business have enormous value and are just beginning to be touched on. Some amazing things could happen; it's a whole area to expand," he said with excitement.

After landing in the business world during the early 1980s, Redford realized that he needed to learn an entirely new language to communicate with bankers effectively.

"Because I was an artist who stumbled into business with an idea, I was not prepared. I spoke a language as an artist and needed to build a team of people to support and take the story further. I was not good at it because I spoke in a more abstract way, and it couldn't be understood. If I went into a public arena, it wasn't very good because it seemed like there was another language businesspeople spoke. So it was a language I needed to learn in order to survive in that arena."

Against an accountant's advice, Redford initially purchased two acres of land in Park City, Utah, to build a log cabin by hand and raise his family near the mountains. His first investment of $500 eventually led to the addition of more land, with the goal of environmental preservation.

Now dedicated to the Sundance Institute and Film Festival, the enterprise evolved into a two-way opportunity for artists outside the mainstream to show their work, as well as an economic driver stimulating business in the area. The well-recognized brand now comprises a resort, real estate and restaurant development, products and sales, and mail-order and web marketing.

"It was not a wholly conceived thing," Redford explained. "Whatever happened, a small step would be taken that would create something that might succeed--that would create other opportunities that you could take advantage of. And you just kept moving forward, one iteration after the next."

"Whatever skills I had, I could expand and push myself forward, and that felt good," Redford said. "So suddenly, you create an idea. And because no one votes for a new idea, you have to bear it and prove it yourself. The minute you get it to a point where it looks like something, you might get some support. One thing leads to another, and the next thing you know, you've got a business or a brand."

When Redford saw that the West was "up for grabs," particularly in Utah, he purchased more land to protect his initial investment.

"I found a little spot of the universe that was special and was like a paradise. And I wanted to keep it that way," Redford said. "Then, I had to do something with the land, and I hadn't thought about that. All I wanted was to preserve it.. I just learned as I went. I thought to develop some kind of business to create revenue to make the payments, which would be more than I could personally handle."

After 10 years of running Sundance, Redford was still spending an exorbitant amount of time raising money. The effort was eating into his own career, so he began producing a catalog and selling name-brand apparel and other items.

"So I thought 'Let's start a business that can make some profits rather quickly that we needed for the nonprofit business,'" he said. Although Redford knew nothing about fashion, the idea "looked like it could work and produce early results."

Redford, describing a long journey in achieving this success, also readily admitted making mistakes along the way. For example, he hired employees because he liked them and became their friends, which eliminated the discipline of doing work. Growing up in a working-class family, Redford also described his ongoing sensitivity to the treatment of service people; ultimately, though, he realized that his direct connection with employees and assurances of friendship did not help them perform better.

"I have not been very successful at that, and it's very important," he said, referring to the critical selection of creative team members and their ability to convey key business ideas.

In addition, Redford has discovered the value of patience, diplomacy and tolerance when considering other viewpoints. To facilitate the acceptance of new ideas, he also suggested understanding the people you're addressing and their DNA.

"Find a way to communicate with them in a way that begins with letting them know you understand who they are and what they do," Redford said.

"For me, change is inevitable. So you go with it, and you treat it in an exciting way."